A glass of wine or pint of beer each night raises the risk of a stroke, finds major study that debunks myth that light drinking protects health

Having just one or two alcoholic drinks a night significantly increases the risk of suffering a stroke in later life, a major study has shown.

They found that one or two drinks a day increased the risk of suffering a stroke in the next ten years by 10 to 15 per cent, and four drinks a day by 35 per cent.

For years many experts have argued that consuming alcohol moderately has a protective effect – pointing to studies which showed the odd glass of wine or pint of beer reduced the risk of heart attacks and strokes.

But critics argue those studies were flawed – because they included alcoholics who have become tee-total or people who did not drink because of other health problems. 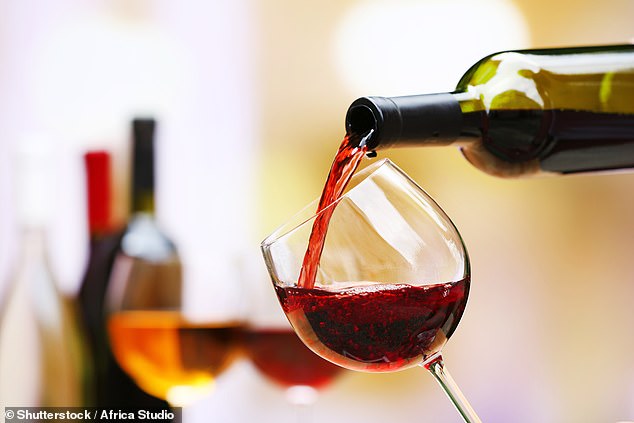 So the evidence seemed to suggest that light drinkers were at lower risk than those who drank nothing at all.

The new study, published in the Lancet medical journal, got around this problem by using a genetic study of people in China.

A third of people in China carry a genetic quirk that means they cannot tolerate drink.

Their genes mean they do not have the ability to clear away a toxic byproduct of alcohol – causing them to become nauseous and flushed after even a small volume of drink.

The researchers tested the genes of people in ten parts of China – and then tracked their drinking.

Those who did not drink because of their genetic mutation were judged to be a reliable marker of zero alcohol consumption, because they simply could not tolerate the drink.

The other two-thirds of the participants who did not suffer from the same genetic quirk were able to drink freely – and the men on average drank four drinks a day and were at a far higher risk of suffering high blood pressure and strokes.

BEER BEFORE WINE IS NOT FINE, SCIENTISTS FIND

Beer before wine and you’ll feel fine, is how the tactical tippler thinks – but the old adage appears to be a myth.

In a less than surprising revelation, researchers last month found hangovers are just as bad, regardless of what order you drink your drinks.

Some were asked to drink two and a half pints of Carlsberg, followed by four large glasses of white wine. A second group started with wine before beer.

Researchers had to control the drunk participants, who were singing and dancing, with a megaphone. They were sent to bed in the lab at 1am.

Participants were asked about their hangover the following day and gave a score on a so-called Acute Hangover Scale.

The findings, led by a team at Cambridge University, indicated that no matter how you order your drinks, if you drink too much you are still likely to be ill.

Dr Kai Hensel, one of the researchers, said: ‘The vomiting rate was a little higher than I’d have thought. But they enjoyed it.’

Chinese women drank very little, regardless of their genetic make-up.

But researcher Professor Sir Richard Peto, co-director of the Clinical Trial Service Unit at Oxford University, said he was confident the findings were applicable to British men and women alike.

He stressed the findings were not intended to put people off drinking – and said smoking would have a much bigger impact on risk.

Sir Richard said: ‘I don’t think people are going to change what they drink due to these results.

‘But we have got the truth about a story that has been a myth for ages.’ Study leader Professor Zhengming Chen, also of Oxford, said: ‘It has been claimed that moderate drinking is potentially beneficial, especially for cardiovascular disease.

‘This study shows really robust evidence that refutes this claim. The key message is this protective effect is not real.

‘Even moderate alcohol consumption increases the chances of having a stroke..’ He added: ‘The findings for heart attack were less clear-cut, so we plan to collect more evidence.’ The study supports official drinking guidelines issued by the chief medical officer Dame Sally Davies in 2016, which warned there is no ‘safe’ level of drinking.

Leading scientists who were initially critical of that guidance said they may change their minds in the light of the new findings.

David Spiegelhalter, professor for the public understanding of risk at the University of Cambridge, said: ‘I have always been reasonably convinced that moderate alcohol consumption was protective for cardiovascular disease, but now I am having my doubts.’

He added: ‘This is a very impressive study which shows that men who, by chance, have a combination of genes that put them off drinking alcohol, have a lower risk of stroke compared with those without these genes.

‘The fact that this is not true for Chinese women, who tend not to drink whatever their genes, suggests this effect is due to the alcohol rather than the genes themselves.’ He added: ‘The increase in total stroke risk was around 38 per cent for every 40g of alcohol drunk per day; that’s five UK units, or over a half-bottle of wine.

‘To give this some perspective, it is very roughly the opposite effect of taking a statin.’

DO YOU DRINK TOO MUCH ALCOHOL? THE 10 QUESTIONS THAT REVEAL YOUR RISK

One screening tool used widely by medical professionals is the AUDIT (Alcohol Use Disorders Identification Tests). Developed in collaboration with the World Health Organisation, the 10-question test is considered to be the gold standard in helping to determine if someone has alcohol abuse problems.

The test has been reproduced here with permission from the WHO.

To complete it, answer each question and note down the corresponding score.

0-7: You are within the sensible drinking range and have a low risk of alcohol-related problems.

Over 8: Indicate harmful or hazardous drinking.

8-15: Medium level of risk. Drinking at your current level puts you at risk of developing problems with your health and life in general, such as work and relationships. Consider cutting down (see below for tips).

16-19: Higher risk of complications from alcohol. Cutting back on your own may be difficult at this level, as you may be dependent, so you may need professional help from your GP and/or a counsellor.

20 and over: Possible dependence. Your drinking is already causing you problems, and you could very well be dependent. You should definitely consider stopping gradually or at least reduce your drinking. You should seek professional help to ascertain the level of your dependence and the safest way to withdraw from alcohol.

Severe dependence may need medically assisted withdrawal, or detox, in a hospital or a specialist clinic. This is due to the likelihood of severe alcohol withdrawal symptoms in the first 48 hours needing specialist treatment.