It would be fair to say that Station Street Mall in Frankston has never been a particularly pretty promenade. A place of unprepossessing buildings, impermeable paving and telephone exchange boxes, a bucolic idyll this mall was not.

This downtown walkway was for downtown business and, if it was relaxing and lingering you were after, well, the foreshore or one of the suburb’s parks were the places for you. 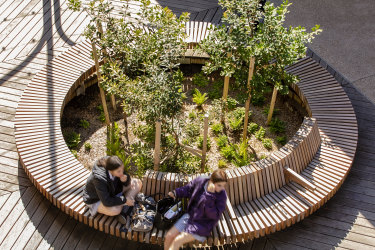 But as cities all around the world get denser and hotter, we are seeing the benefits of mixing things up a bit. A push to make all civic spaces – roads, riverfronts, underpasses, decommissioned railway tracks – greener, friendlier and more multi-use is gathering pace and the remodelling of Frankston’s Station Street Mall is one of the most recent local examples.

The refurbished mall, designed by Site Office for the City of Frankston, is now a shopping strip and walkway that doubles as a garden, a meeting spot and a storm-water retention zone and it has just won a national civic landscape award. The judging panel of the Australian Institute of Landscape Architects awards this month described the “beautiful” and “non-prescriptive” space as a “great civic design precedent”.

The landscape bucks convention in a number of ways, but especially in how the planting is placed slap-bang in the centre. You can’t traverse this mall without encountering the series of circular sunken beds planted with coastal banksias and native ferns. 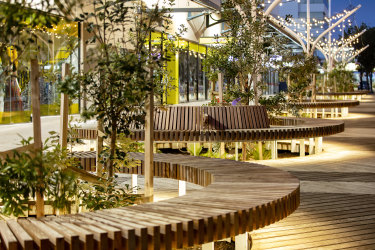 These gardens are ringed by timber benches, which by 10.30am one morning this week, were thronging with people basking in sunlight and lemon-yellow Banksia integrifolia flowers. The timber decking that has replaced the brown brick paving, not only softens the mood but allows stormwater to penetrate to the ground below and thereby reduce the risk of the nearby creek flooding.

Susie Kumar and Chris Sawyer, the landscape architects behind Site Office, have long advocated for urban public spaces to start supporting a wider range of activities and to better improve natural ecologies.

They insist no public space is so marginal that it can’t be revitalised and help “reimagine what a city could be”. But rather than the piecemeal approach that is usually adopted they say a coordinated all-of-town effort, such as the 10-year-plan launched in Barcelona last year with the aim of clearing many of the city’s streets of cars and introducing a slew of new green spaces, inevitably have more of an impact.

When it came to the mall project, Kumar and Sawyer wanted to show just how much could be done. They designed the sort of mall where people would happily bring their own lunch and eat it as if they were sitting in a park. 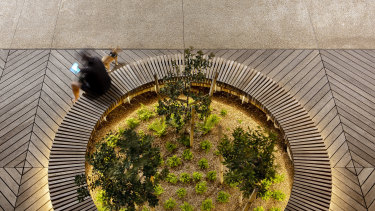 Kumar says one of their cues for the planting was 19th century photographs that depict Frankston as a glamorous seaside resort town with visitors casually lounging among an abundance of ferns.

A dramatic sphere of staghorns features in one of the historic pictures but Kumar and Sawyer went for more casual arrangements of Victorian species like the fine, lacy Pteris tremula (Tender Brake), which hails from many places in Australia including Frankston, and Pteris umbrosa (Jungle Brake) found naturally in rainforests in East Gippsland.

Their overhaul has drawn widespread praise: “Absolutely loving all the improvements at the moment,” is typical of many of the recent comments on a council Facebook page. But Kumar and Sawyer say they are still wary about the mall’s long-term future, particularly if high-rise development, which would cast the mall in permanent shadow, is allowed.

“It’s not just about designing a lovely public space, a lot of designers can do that,” Sawyer says. “The question is how to design a city that allows those spaces to flourish in five, 10, 50 years from now.”

He would like to see the widespread adoption – across all cities – of tighter planning regulations that put stricter height limits on buildings and that elevate the value of open public space. “Everyone has declared a climate emergency but there are still so many vested interests that people, for whatever reason, can’t extract themselves from.”

In the meantime, Kumar says the Australian Institute of Landscape Architects award helps sends out the message that there is value in taking a different approach.