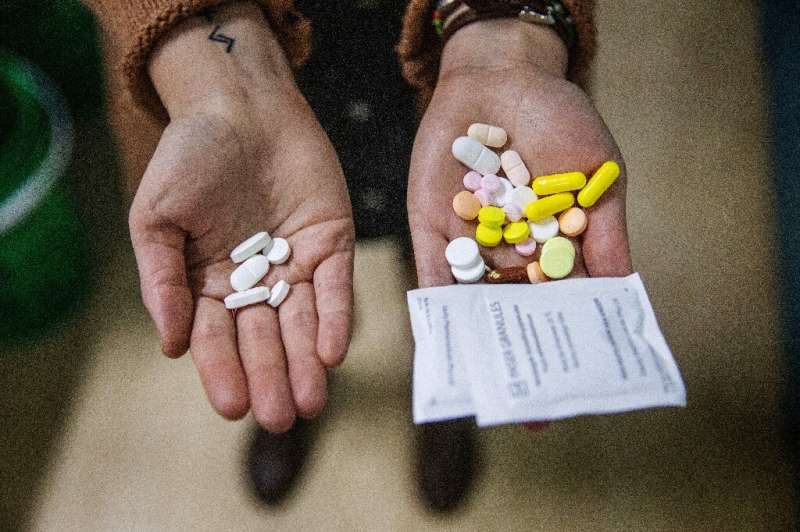 Volodymyr is celebrating a major milestone on Wednesday—it’s his final day of taking a new treatment hailed as a turning point in the fight against drug-resistant tuberculosis.

The 25-year-old doctor in Ukraine’s capital Kyiv said he had nasty neurological side effects when he was on a previous drug regimen, which takes up to two years, involves a huge number of pills and is less than 60-percent effective.

But the new treatment course took just six months, and gave him very few side effects. “It was very easy,” he told AFP.

A scan on Wednesday showed he was clear of tuberculosis, and he plans to start work next week after eight months off sick.

“Now I can start life again,” said Volodymyr, who did not give his last name.

Tuberculosis, once called consumption, was the world’s biggest infectious killer before the arrival of COVID-19, with 1.5 million people dying from the disease each year.

Around five percent of new cases are resistant to commonly prescribed antibiotics, making them difficult to treat.

However a new drug regimen, called BPaL because it combines the antibiotics bedaquiline, pretomanid and linezolid, has been seen as a breakthrough since it was first approved by the US Food and Drug Administration in 2019.

From 23 to five pills a day

Research in 2020 showed that the BPaL regimen cured more than 90 percent of drug-resistant patients, however there was a high rate of side effects linked to linezolid, including nerve pain and bone marrow suppression.

But a study published in the New England Journal of Medicine on Wednesday indicated that the dosage of linezolid can be halved.

A trial involving 181 participants with drug-resistant tuberculosis was carried out in Russia, South Africa, Georgia and Moldova—all countries with high TB rates.

It found that while 1,200 milligrams of linezolid over six months had a cure rate of 93 percent, that number only dropped to 91 percent if the dosage was halved to 600 milligrams.

The number of participants with the side of peripheral neuropathy—which causes nerve pain—fell from 38 to 24 percent at the lower dosage, while the rate of bone marrow suppression dropped from 22 to two percent.

The study’s lead author, Francesca Conradie of South Africa’s University of the Witwatersrand, said she was “overwhelmed with how successful this regimen was”.

“This is the beginning of the end of drug-resistant TB,” she told AFP.

“The quicker you treat someone’s TB, the less infectious they are—it’s like COVID in many ways.”

It is also far easier for patients to take BPaL, she added, saying previous courses could involve 23 pills a day—and up to 14,000 total pills over the maximum two-year course.

Nataliia Lytvynenko, who has overseen BPaL treatments in Ukraine, said the more manageable amount of pills meant it was easier for patients to continue treatment after being displaced by the war in her country.

The World Health Organization indicated earlier this year that it would soon update its guidelines to recommend most patients with drug-resistant TB use BPaL with 600 milligrams of linezolid.

Two experts not involved in Wednesday’s study said the research and the WHO guidance were “major advances”.

The BPaL treatment “is one of the defining achievements of the tuberculosis research community in this century,” Guy Thwaites of Britain’s Oxford University and Nguyen Viet Nhung of Vietnam’s National Tuberculosis Control Programme wrote in an editorial in the New England Journal of Medicine.

The advances come amid warnings that the pandemic has stalled progress against tuberculosis.

“I very much worry that TB will—whether it’s this year or next—again become the largest single killer of any infectious disease in the world,” said Mel Spigelman, the president of the non-profit TB Alliance which funded the research.

Volodymyr meanwhile said he hoped that progress would continue so the treatment timeline gets even shorter.