New cases of COVID-19 continue to drop among children, but the vaccination effort in those under age 5 years began with something less than a bang.

Data are available only for the first 2 weekdays after the final approval on Saturday, June 18, but they show that just 1,245 children aged 4 years and younger received the COVID vaccine on June 20 and June 21. In the first 2 days after their respective approvals, almost 99,000 children aged 5-11 years and over 675,000 children aged 12-15 were vaccinated, according to data from the Centers for Disease Control and Prevention. Children aged 0-4 years represent almost 6% of the overall population, compared with 8.7% for the 5- to 11-year-olds and 5.1% for those aged 12-15. 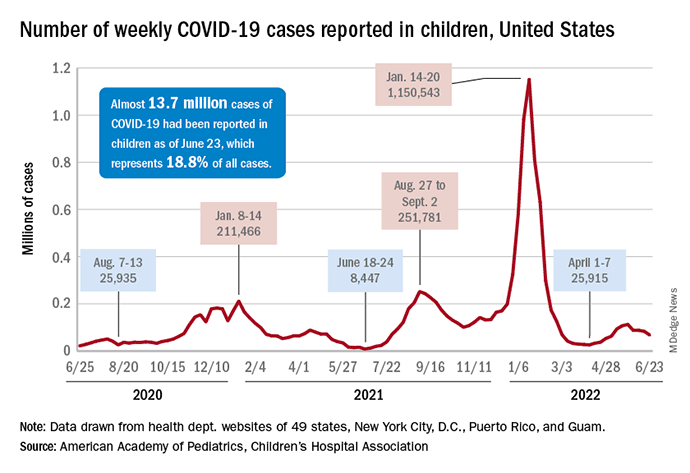 The recent decline in new cases over the past 4 weeks and the substantial decline since the Omicron surge could be a factor in the lack of response, but it is worth noting that the almost 68,000 new child cases reported in the past week, June 17-23, are “far higher than 1 year ago, June 24, 2021, when 8,400 child cases were reported,” the American Academy of Pediatrics and the Children’s Hospital Association said in their weekly COVID report.

That total for June 17-23 was 19% lower than the previous week and down by 40% since new cases hit a spring peak of 112,000 in late May. Regionally, new cases were down in the Midwest, the South, and the West, the AAP/CHA report showed, but the Northeast saw a small increase, which could be a signal of things to come for the summer.

The decline in new cases, however, has not been accompanied by decreases in hospitalizations or emergency department visits. New admissions of children aged 0-17 with confirmed COVID were at 0.31 per 100,000 population on June 24 after reaching that level on June 15, so no drop-off has occurred yet but there are signs of leveling off, based on CDC data.

This article originally appeared on MDedge.com, part of the Medscape Professional Network.