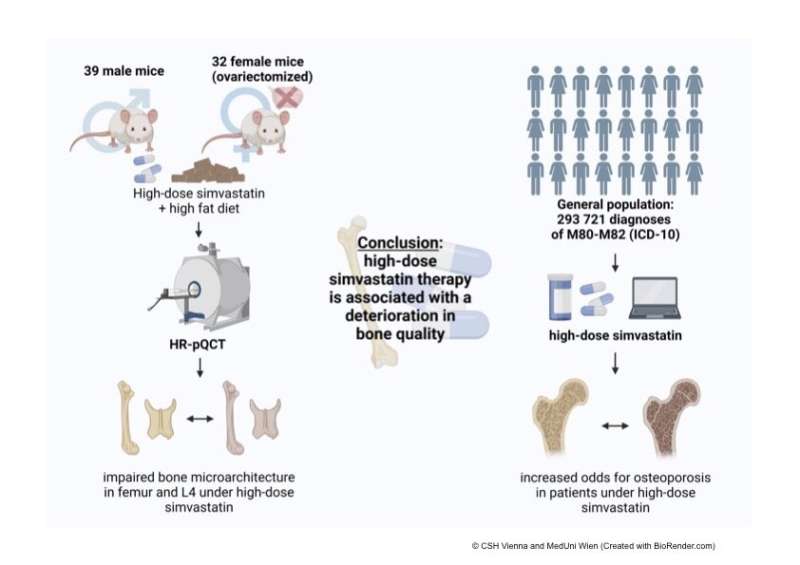 Researchers from the Complexity Science Hub (CSH) and the Medical University of Vienna (MedUni) have demonstrated for the first time that high doses of cholesterol-lowering statins impair bone quality in mice. The finding came as no surprise for the scientists, who observed the correlation in a big data analysis of the Austrian population in 2019.

“This is the first study to prove the connection between a high dose of statins and osteoporosis in mice,” says Peter Klimek, leader of the data analysis team at CSH and one of the authors of the study published in Biomedicine & Pharmacotherapy. “This makes it more likely that this is also happening in humans, in addition to the previous cross-sectional study with population data,” adds Klimek.

“The results of our new study confirm and prove those of our previous analysis of the Austrian population in 2019. In both investigations, we found that high doses of statins may increase the risk for osteoporosis,” states Michael Leutner, from MedUni and first author of the study. “Now, with the animal experiment, we demonstrate the cause and effect relationship.”

The paper published in 2019 laid the groundwork for this new study, according to Leutner. It was the first time a dose-dependent link was shown between the cholesterol-lowering drugs and osteoporosis diagnosis. The team discovered that high doses of statins may increase the risk of the bone-damaging condition, but also saw a protective effect, where a low dose of statins may protect against it. At that time, a health database of over 7.9 million Austrians was searched and 353,502 statin users were found. Of these, 11,701 had a diagnosis of osteoporosis.

In the new study, the team sought to better understand the observational data, as well as provide additional evidence that the mechanism is at work in animals and humans. “As a result of the first publication, we started with a translational project, which includes (an ongoing) clinical study, as well as basic science with a mouse model, and big data analysis,” explain Leutner and Alexandra Kautzky-Willer, from MedUni and last author of the paper.

How it is going

This time, the scientists combined the mouse experiments with big data analysis of the Austrian population. “Our goal was to investigate whether continued and long-term exposure to high doses of statins in mice would promote the same detrimental effects on bone, as observed in humans,” says Leutner.

A total of 39 males and 32 female mice (who had their ovaries surgically removed) were used in the animal trial. The rodents were divided into two groups: one was given high dose statins and the other was not.

In the big data part of the project, Klimek and his colleagues went over the same health database of over 7.9 million Austrians used in the 2019 study. They were looking for a group of people that was most comparable to the mice groups used in the experiments, according to Klimek. The scientists found 138,666 men and 155,055 post-menopausal women who received high dose statins for at least one year. They compared them with 415,998 men and 465,165 women who had not taken the cholesterol-lowering drugs.

A 3D detailed imaging technique was used to examine the bone quality of the mice and found that long-term high dose statin therapy had detrimental effects on bone in both males and ovariectomized female mice. Different parts and characteristics of bone, such as volume and thickness, were affected by the cholesterol-lowering medication. In male mice, bone volume of the trabecular femur (the spongy and porous bone) was reduced by 42 percent, while in female mice, it was reduced by 34 percent.

In the big data analysis, Klimek and his colleagues found that people taking high dose statins were four to six times more likely to develop osteoporosis. “The results are consistent with the mouse data and our previous 2019 analysis,” says Klimek.

Klimek and Leutner argue that the new study provides evidence that high doses of statins, one of the most commonly prescribed drugs for lowering cholesterol levels, may cause serious side effects on bone metabolism and have an impact on future treatments. “Our results inevitably raise concerns about osteoporosis as a potential side effect of high statin dosage and call for monitoring of bone metabolism in such patients,” urge the authors of the paper.

“However, it remains to be demonstrated whether newer cholesterol-reducing drugs, other than statins (like PCSK-9 inhibitors—newer and most effective drugs for the therapy of high cholesterol levels with proven cardiovascular benefits), have better effects on bone metabolism in humans. If so, the treatment should be tailored to the individual, especially for high-risk populations for osteoporosis, like postmenopausal women,” they suggest.

“According to our results, doctors should also monitor bone metabolism in patients under high-doses of statins, as well as possibly begin with an additional bone protecting therapy in individual cases if necessary.”

Moreover, Klimek notes that these papers demonstrate the critical importance of taking a translational and multidisciplinary approach to biomedical research. “From the big data point of view, our results demonstrate that it is possible to discover concrete science of new adverse effects for some of the most prescribed medications. As the data is already collected, we can do this easily and cheaply. The data analysis can be done in a couple of weeks, while animal experiments and clinical trials can take up to years.”

“You might want to try reproducing the study using big data before undergoing costly experiments—and without doing any interventions in humans,” Klimek suggests.