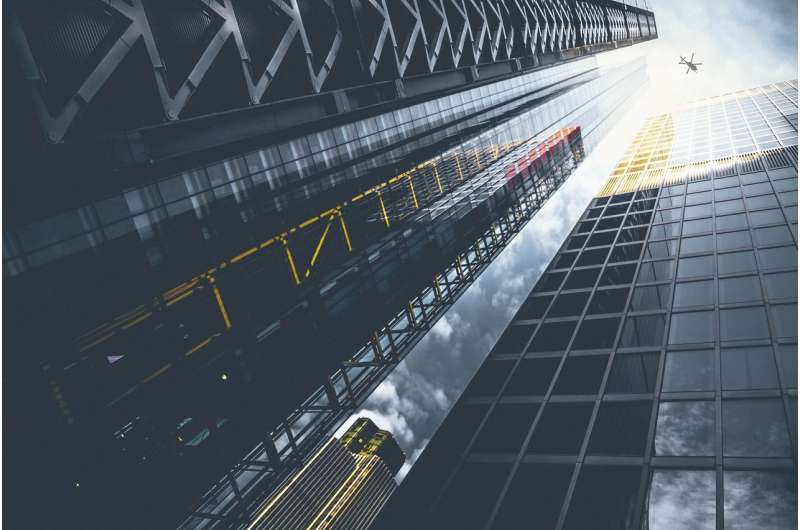 Traditional public health protective measures such as social distancing through people staying mostly at home during outbreaks may not be enough to stop transmission of COVID-19 within densely populated high-buildings, says Prof Yugou Li, University of Hong Kong, SAR China, in a talk on this subject a special meeting on COVID-19 of the European Congress of Clinical Microbiology & Infectious Diseases (ECCMID 2022) on Wednesday 23 March, ahead of the main congress in Lisbon (23-26 April).

Drainage stack bioaerosols—that it is, bioaerosol particles generated from discharged waters containing probably sputum or saliva of people infected with SARS-CoV-2 within drainage pipes– can spread via the drainage pipes of infected buildings. Indeed, back in 2003, such drainage stack aerosols (although more likely faecal aerosols) were likely responsible for the Amoy Gardens outbreak in Hong Kong during the original SARS-CoV (or ‘SARS-1’) pandemic. Since the original SARS-CoV-2 virus was less transmissible, especially when compared with the omicron variant, these risks probably exist in densely populated high-rise housing in the context of the ongoing pandemic. These vertical outbreaks between flats in high-rise housing may also have contributed significantly during the recent rapid spread of omicron variant in Hong Kong.

In his talk, Prof Li will make reference to several papers his team has published in this subject, all referring to outbreaks of previous variants of COVID-19 less infectious than the currently dominant omicron variant. In a paper published in The Annals of Internal Medicine in September 2020, he details an outbreak in a high-rise block in Guangzhou, China, early in the pandemic in January 2020. Testing identified nine positive cases, while 193 other residents and 24 staff tested negative. The team identified the locations if the infected apartments, and positive environmental samples, and the likely route of spread of virus-laden aerosols.

The nine cases were clustered in three families, one of which had a history recent travel to Wuhan, China. “The other 2 families had no travel history and a later onset of symptoms. No evidence was found for transmission via the elevator or elsewhere,” explain the authors. “The families lived in 3 vertically aligned flats connected by drainage pipes in the master bathrooms. Both the observed infections and the locations of positive environmental samples are consistent with the vertical spread of virus-laden aerosols via these stacks and vents.”

A more recent outbreak in January 2021 was reported in the journal Interface Focus. Poor housing conditions, have, in various research, been associated with a very high COVID-19 incidence and transmission of other infectious diseases. In this outbreak, the team investigated a Hong Kong COVID-19 outbreak in early 2021 in four traditional ‘Tong Lau’ houses with subdivided units. Such buildings are typical especially in underprivileged areas of Hong Kong.

In this case there were more than 80 subdivided units of less than 20 m2 floor area each on average, spread across 4 interconnected ‘houses’ which shared stairwells and ventilation systems. With a total of 34 confirmed COVID-19 cases, the outbreak had an attack rate of 25.4%, being one of the highest attack rates observed in Hong Kong, and ranked among the highest attack rates in reported outbreaks internationally at the time.

Prof Yi and colleagues said that: “The adding of warm water into the drainage system, and the operation of the exhaust fan in the bathroom enhanced the suction rate of tracer gas in each unit. The horizontal cluster of confirmed COVID-19 patients among the subdivided units in one flat may be attributed to inter-unit transmission due to design flaws of the exhaust pipes. Our study offers a glimpse into the complexities of the indoor environmental issues faced by residents who live in extremely small residential units, where space constraints not only apply to people, but also in building drainage systems and ventilation. The findings in the four Tong Lau houses, which probably apply to many Tong Lau settings, may provide a reference for building designers and building regulations in Hong Kong.”

In a third study published in The Journal of Hazardous Materials (August 2021), the Prof Li and colleagues discuss 15 so-called ‘stack aerosol’ outbreaks in Guangzhou and Hong Kong, and investigated two in Hong Kong and identified the probable role of chimney effect-induced airflow in a building drainage system in the spread of SARS-CoV-2.

“We injected tracer gas (SF6) into the drainage stacks via the water closet of the index case and monitored tracer gas concentrations in the bathrooms and along the facades of infected and noninfected flats and in roof vents. The air temperature, humidity, and pressure in vertical stacks were also monitored,” explains Prof Li. “The measured tracer gas distribution agreed with the observed distribution of the infected cases. Genetic analysis of the SARS-CoV-2 genome sequences demonstrated clonal spread from a point source in cases along the same vertical column. The stack air pressure and temperature distributions suggested that stack aerosols can spread to indoors through pipe leaks which provide direct evidence for the long-range aerosol transmission of SARS-CoV-2 through drainage pipes via the chimney effect.”

The authors explain that the most effective control for leakage of stack aerosols should be implemented at the source, such as avoiding any potential gas leaks from the drainage system into indoor spaces. They say it is also necessary for infected individuals, and indeed everyone due to the existence of asymptomatic individuals, to minimise the discharge of nasal or oral secretions into the washbasin (using tissue paper instead).

But Prof Li explains: “However, this may not be practical as people generally spit into the washbasin while brushing their teeth. This will involve changes in spitting behaviour when using private bathrooms and public toilets. It is also important for health authorities to recognise vertical transmission patterns early and to implement appropriate measures to prevent the further propagation of an outbreak through vertical drainage stacks. We cannot rule out the possibility of buoyancy flow transport in fully enclosed or semi-open light wells. Therefore, we recommend that residents close the bathroom windows when turning on the exhaust fan.”

In another paper published in The Journal of Hazardous Materials (Feb 2022), Prof Li and colleagues describe an outbreak in Luk Chuen House, Hong Kong, involving two vertical columns of flats associated with an unusually connected two-stack drainage system, in which nine individuals from seven households were infected with SARS-CoV-2.