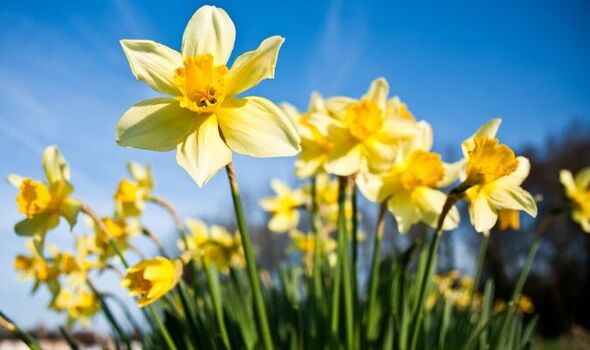 Powys-based bioresearch company Agroceutical Products has been harvesting the spring blooms for three years 1,000ft above sea level in the Black Mountains, as they are uniquely rich in the compound galantamine. Trials show this brain health supplement eases the symptoms of Alzheimer’s by slowing cognitive decline. But it takes 100 daffodils to produce enough galantamine to last one dementia sufferer a year.

And Agroceutical’s fields at Hay-on-Wye currently produce only 20kg annually – enough to treat just 9,000 Alzheimer’s patients when crystallised into prescription tablets and capsules.

The firm, along with Canadian neuroscience company Neurodyn Life Sciences, is aiming for an over-thecounter version by next year. To achieve that, the chairman of Agroceutical, Sir Roger Jones, wants Welsh hillsides to become farms for the high-altitude daffs.

The former BBC governor, 78, said: “We have found a way of growing daffodils and extracting galantamine from them in a very cost-efficient way.

“This means there is more money in the pot to share with farmers to grow them.”

He wants to work with clusters of upland farms to plant fields with daffodils alongside grazing sheep, which do not like the taste of them.

Mr Stephens hopes to scale up production to produce 1,000kg of the supplement annually.

He added: “It’s amazing to think the Welsh national emblem has the potential to improve the lives of sufferers across the world.”

Mr Stephens explained Alzheimer’s is responsible for an enzyme imbalance in the brain, which effectively allows plaque to kill nervous system cells. He added: “Galantamine causes the opposite enzyme imbalance.”

Dafydd Jarrett, of farmers’ association NFU Cymru, believes the idea is a chance for hill farms to add a string to their bow. He said: “Anything that can be done to mitigate the symptoms of Alzheimer’s is most welcome.”

The use of certain bulb plants to treat brain conditions dates back to ancient Greece.