ERs Are Swamped With Seriously Ill Patients, Although Many Don’t Have Covid

Inside the emergency department at Sparrow Hospital in Lansing, Michigan, staff members are struggling to care for patients showing up much sicker than they’ve ever seen.

Tiffani Dusang, the ER’s nursing director, practically vibrates with pent-up anxiety, looking at patients lying on a long line of stretchers pushed up against the beige walls of the hospital hallways. “It’s hard to watch,” she said in a warm Texas twang.

But there’s nothing she can do. The ER’s 72 rooms are already filled.

“I always feel very, very bad when I walk down the hallway and see that people are in pain, or needing to sleep, or needing quiet. But they have to be in the hallway with, as you can see, 10 or 15 people walking by every minute,” Dusang said.

The scene is a stark contrast to where this emergency department — and thousands of others — were at the start of the pandemic. Except for initial hot spots like New York City, in spring 2020 many ERs across the country were often eerily empty. Terrified of contracting covid-19, people who were sick with other things did their best to stay away from hospitals. Visits to emergency rooms dropped to half their typical levels, according to the Epic Health Research Network, and didn’t fully rebound until this summer.

But now, they’re too full. Even in parts of the country where covid isn’t overwhelming the health system, patients are showing up to the ER sicker than before the pandemic, their diseases more advanced and in need of more complicated care.

But they can hardly be accommodated. Emergency departments, ideally, are meant to be brief ports in a storm, with patients staying just long enough to be sent home with instructions to follow up with primary care physicians, or sufficiently stabilized to be transferred “upstairs” to inpatient or intensive care units.

Except now those long-term care floors are full too, with a mix of covid and non-covid patients. People coming to the ER get warehoused for hours, even days, forcing ER staffers to perform long-term care roles they weren’t trained to do.

At Sparrow, space is a valuable commodity in the ER: A separate section of the hospital was turned into an overflow unit. Stretchers stack up in halls. A row of brown reclining chairs lines a wall, intended for patients who aren’t sick enough for a stretcher but are too sick to stay in the main waiting room.

Forget privacy, Alejos Perrientoz learned when he arrived. He came to the ER because his arm had been tingling and painful for over a week. He couldn’t hold a cup of coffee. A nurse gave him a full physical exam in a brown recliner, which made him self-conscious about having his shirt lifted in front of strangers. “I felt a little uncomfortable,” he whispered. “But I have no choice, you know? I’m in the hallway. There’s no rooms.

“We could have done the physical in the parking lot,” he added, managing a laugh.

Even patients who arrive by ambulance are not guaranteed a room: One nurse runs triage, screening those who absolutely need a bed, and those who can be put in the waiting area.

“I hate that we even have to make that determination,” Dusang said. Lately, staff members have been pulling out some patients already in the ER’s rooms when others arrive who are more critically ill. “No one likes to take someone out of the privacy of their room and say, ‘We’re going to put you in a hallway because we need to get care to someone else.’” 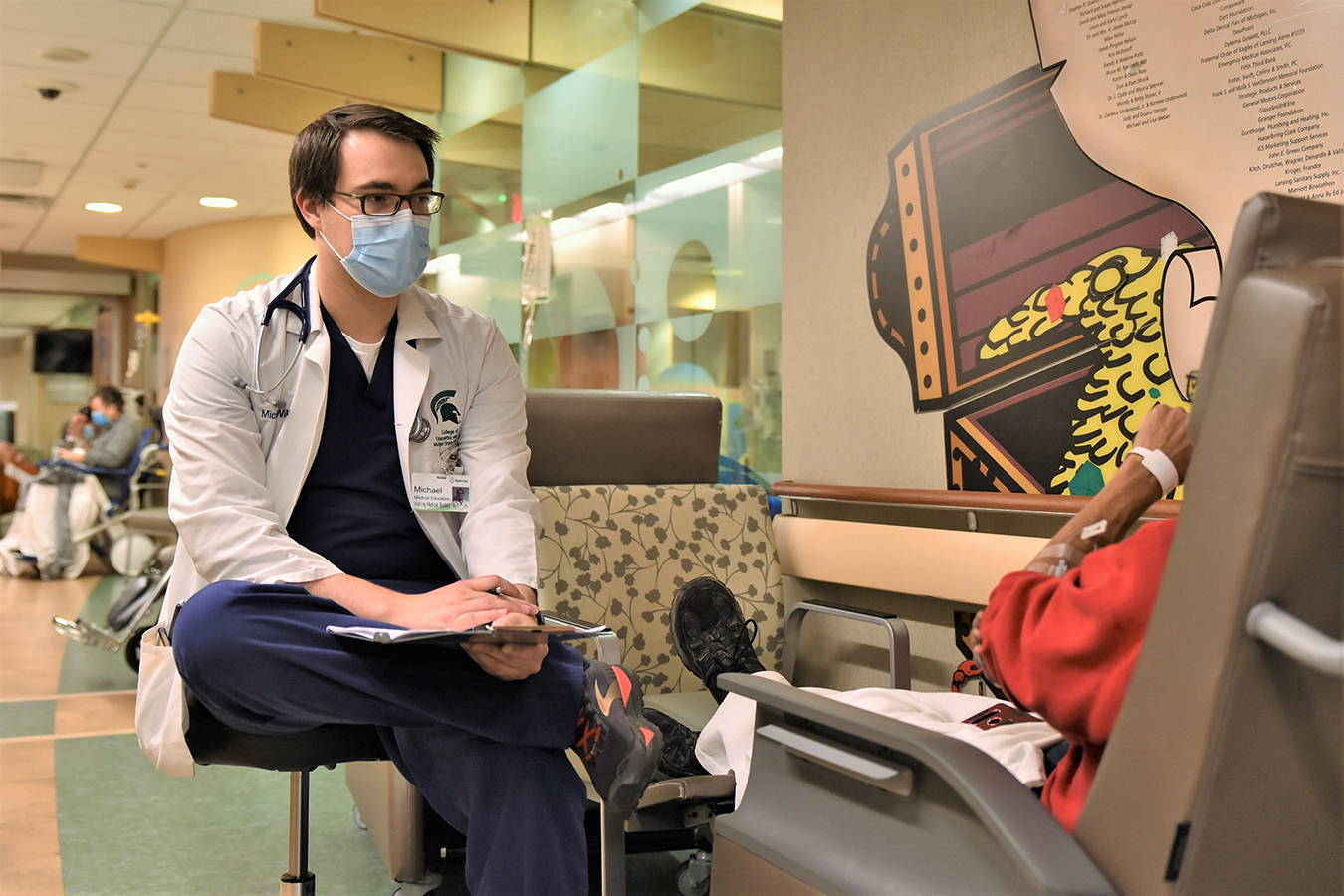 “We are hearing from members in every part of the country,” said Dr. Lisa Moreno, president of the American Academy of Emergency Medicine. “The Midwest, the South, the Northeast, the West … they are seeing this exact same phenomenon.”

Although the number of ER visits returned to pre-covid levels this summer, admission rates, from the ER to the hospital’s inpatient floors, are still almost 20% higher. That’s according to the most recent analysis by the Epic Health Research Network, which pulls data from more than 120 million patients across the country.

“It’s an early indicator that what’s happening in the ED is that we’re seeing more acute cases than we were pre-pandemic,” said Caleb Cox, a data scientist at Epic.

Less acute cases, such as people with health issues like rashes or conjunctivitis, still aren’t going to the ER as much as they used to. Instead, they may be opting for an urgent care center or their primary care doctor, Cox explained. Meanwhile, there has been an increase in people coming to the ER with more serious conditions, like strokes and heart attacks.

So, even though the total number of patients coming to ERs is about the same as before the pandemic, “that’s absolutely going to feel like [if I’m an ER doctor or nurse] I’m seeing more patients and I’m seeing more acute patients,” Cox said.

Moreno, the AAEM president, works at an emergency department in New Orleans. She said the level of illness, and the inability to admit patients quickly and move them to beds upstairs, has created a level of chaos she described as “not even humane.”

At the beginning of a recent shift, she heard a patient crying nearby and went to investigate. It was a paraplegic man who’d recently had surgery for colon cancer. His large post-operative wound was sealed with a device called a wound vac, which pulls fluid from the wound into a drainage tube attached to a portable vacuum pump.

But the wound vac had malfunctioned, which is why he had come to the ER. Staffers were so busy, however, that by the time Moreno came in, the fluid from his wound was leaking everywhere.

The nurse in charge of his care told Moreno she simply hadn’t had time to help this patient yet. “She said, ‘I’ve had so many patients to take care of, and so many critical patients. I started [an IV] drip on this person. This person is on a cardiac monitor. I just didn’t have time to get in there.’”

“This is not humane care,” Moreno said. “This is horrible care.”

But it’s what can happen when emergency department staffers don’t have the resources they need to deal with the onslaught of competing demands.

The instance of unintended neglect that Moreno saw is extreme, and not the experience of most patients who arrive at ERs these days. But the problem is not new: Even before the pandemic, ER overcrowding had been a “widespread problem and a source of patient harm, according to a recent commentary in the New England Journal of Medicine.

“ED crowding is not an issue of inconvenience,” the authors wrote. “There is incontrovertible evidence that ED crowding leads to significant patient harm, including morbidity and mortality related to consequential delays of treatment for both high- and low-acuity patients.”

And already-overwhelmed staffers are burning out. 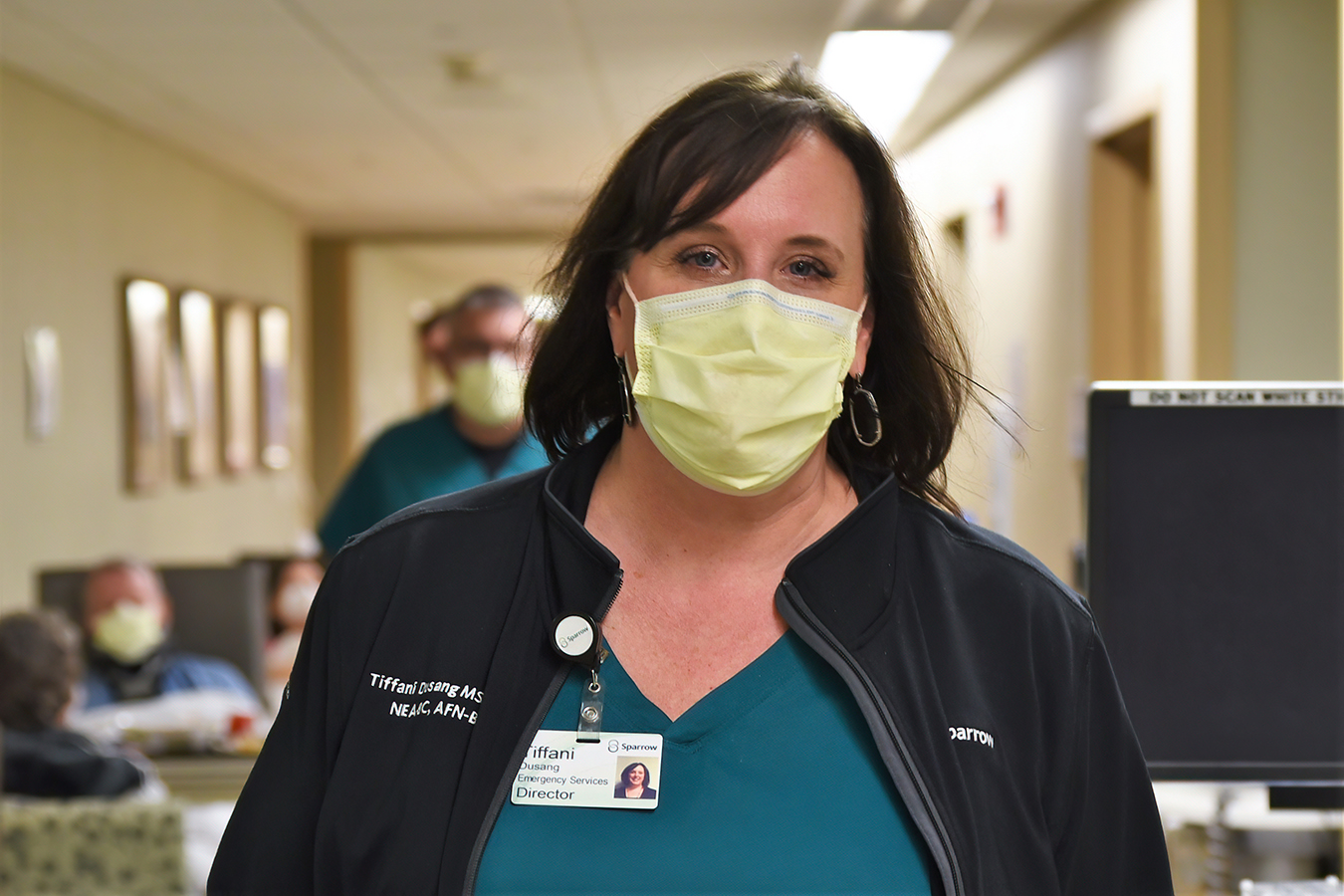 Every morning, Tiffani Dusang wakes up and checks her Sparrow email with one singular hope: that she will not see yet another nurse resignation letter in her inbox.

“I cannot tell you how many of them [the nurses] tell me they went home crying” after their shifts, she said.

Despite Dusang’s best efforts to support her staffers, they’re leaving too fast to be replaced, either to take higher-paying gigs as a travel nurse, to try a less-stressful type of nursing, or simply walking away from the profession entirely.

Kelly Spitz has been an emergency department nurse at Sparrow for 10 years. But, lately, she has also fantasized about leaving. “It has crossed my mind several times,” she said, and yet she continues to come back. “Because I have a team here. And I love what I do.” But then she started to cry. The issue is not the hard work, or even the stress. She struggles with not being able to give her patients the kind of care and attention she wants to give them, and that they need and deserve, she said.

She often thinks about a patient whose test results revealed terminal cancer, she said. Spitz spent all day working the phones, hustling case managers, trying to get hospice care set up in the man’s home. He was going to die, and she just didn’t want him to have to die in the hospital, where only one visitor was allowed. She wanted to get him home, and back with his family.

Finally, after many hours, they found an ambulance to take him home.

Three days later, the man’s family members called Spitz: He had died surrounded by family. They were calling to thank her.

Around 4 p.m. at Sparrow Hospital as one shift approached its end, Dusang faced a new crisis: The overnight shift was more short-staffed than usual.

“Can we get two inpatient nurses?” she asked, hoping to borrow two nurses from one of the hospital floors upstairs.

Without more staff, it’s going to be hard to care for new patients who come in overnight — from car crashes to seizures or other emergencies.

But Latunski had a plan: He would go home, snatch a few hours of sleep and return at 11 p.m. to work the overnight shift in the ER’s overflow unit. That meant he would be largely caring for eight patients, alone. On just a few short hours of sleep. But lately that seemed to be their only, and best, option.

Dusang considered for a moment, took a deep breath and nodded. “OK,” she said.

“Go home. Get some sleep. Thank you,” she added, shooting Latunski a grateful smile. And then she pivoted, because another nurse was approaching with an urgent question. On to the next crisis.

This story is part of a partnership that includes Michigan Radio, NPR and KHN.