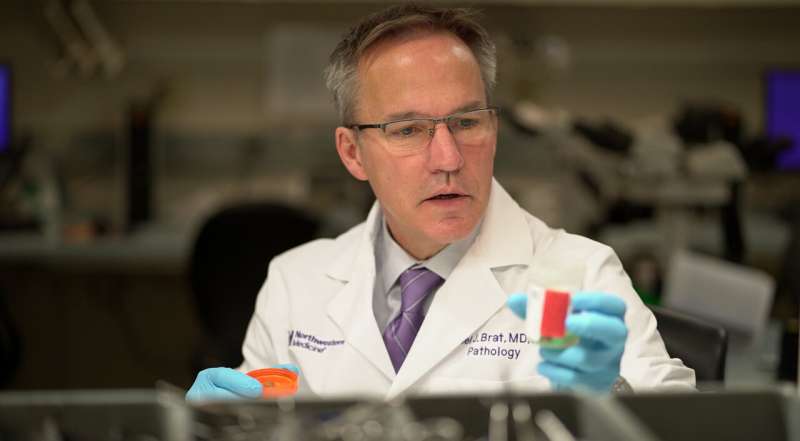 For more than a century, pathologists have classified and graded brain tumors, examining samples under a microscope and looking for telltale signs of tumor class and biological aggressiveness such as cell morphology, cell death, new blood vessels and cell proliferation. However, the advent of more affordable genetic sequencing and the discoveries from large studies such as The Cancer Genome Atlas (TCGA) have upended this paradigm, allowing classification and grading based on more accurate—and less visible —genetic biomarkers.

Brat has been heavily involved in the process of moving these biomarkers from the laboratory to clinical practice. Read a Q&A with Brat below.

How did this effort begin?

Pathologists have been classifying and grading brain tumors since the early 1900s, but in all honesty we weren’t very reproducible and we didn’t provide the most clinically meaningful information by using the microscope as our only diagnostic tool. I could look into the microscope and give one diagnosis, and you could walk down the hall and get another diagnosis from one of my colleagues—it’s part of the limitations of human eyes and brains.

When the enormous amounts of molecular data from TCGA was analyzed for brain tumors, it became clear there were discrete molecular subsets of diffuse gliomas, which are a family of brain and spinal tumors that arises from glial cells and widely infiltrate the brain. A landmark publication in The New England Journal of Medicine (NEJM) distinguished three genetic subsets of gliomas: IDH wild-type gliomas, the most common and deadly type; IDH mutant astrocytomas, which have longer survival; and oligodendrogliomas, with both IDH mutations and 1p/19q co-deletions, which have the longest survival. These findings formed the basis of classification for adult gliomas going forward.

How do these findings affect classification guidelines?

I sit on the World Health Organization (WHO) Classification of Tumors Editorial Board, and at the time of this initial NEJM publication, we recognized these findings needed to be incorporated into our diagnostic platform. However, we were wary of making large changes based on the available data at the time, so we split each astrocytoma class and grade into two categories. For example, in the 2016 WHO classification, grade 2, 3 and 4 astrocytomas had IDH-mutant and IDH-wild type subtypes.

Over time, it became clear that this approach had some problems: certain tumors had the same name and grade, but were behaving extremely differently. This was mostly due to the large impact of IDH mutations on behavior and the fact that we were still using microscopic features to grade tumors within each molecular class. We knew we needed to improve our grading criteria, most likely by including molecular markers, and data from multiple medical centers across the globe were emerging to allow this.

In a series of publications by international brain tumor experts who came together to implement research findings into practice and to inform the WHO classification, we identified specific molecular markers that could more precisely predict tumor behavior and be used for grading purposes. For example, alterations in EGFR, chromosomes 7p and 10q or the TERT promoter could be used to predict grade 4 behavior and to establish the diagnosis of glioblastoma, IDH-wildtype. For IDH-mutant astrocytomas, CDKN2A/B deletions could be used to establish a grade 4 designation. We also simplified and clarified the terminologies so that biologically distinct tumors no longer carried the same names. These changes were codified into the recently published 5th Edition of the WHO Brain Tumor Classification.

These were big steps: pathology has operated on the differentiating principle of morphology for a century, but we were positing that molecular genetic biomarkers are more predictive of clinically relevant behavior than morphology.

What’s the process for implementing updated guidance into clinical care?

After the WHO guidelines were updated, clinical pathology and oncology societies organized by the College of American Pathologists (CAP) and including the Association for Molecular Pathology (AMP), Society for Neuro-oncology and the Association of Neuropathologists, collaborated to provide evidence-based clinical molecular biomarker testing guidelines.

These practice guidelines were needed for the greater pathology and oncology practices, especially for the community setting, since the scope and impact of the changes have been substantial. These guidelines answer the question: “What do I need to get into my laboratory to make these diagnoses and treat these patients appropriately?” Further, there are ways to simplify the process; screening for individual biomarkers can be done relatively cheaply and quickly in many labs and commercial reference laboratories can be relied on as needed for larger scale analysis.

This will require some education and some buy-in, but we think this will become standard practice.

What does the future hold for molecular grading of cancers?

This evolution in molecular glioma classification is a sign of things to come and the diagnostic approach will likely be a playbook for the entire oncology community.