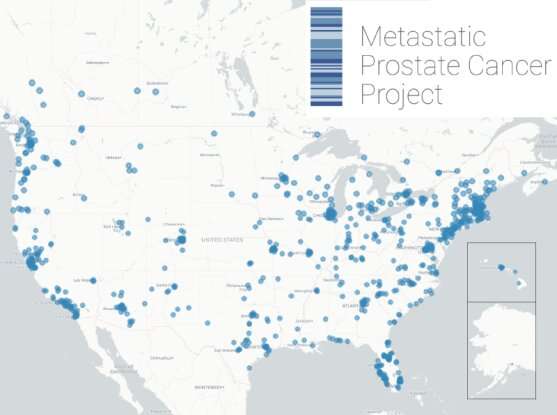 Despite having lived with five different cancers over the last two decades—prostate, thyroid, kidney, appendix, and skin—Joel Nowak doesn’t consider himself a “survivor.” Rather, as a self-described “cancer thriver,” he’s made it his mission to live the best life possible in spite of the disease, which he does by staying actively involved in cancer research and his treatment plan. Now 71, he has become a leading advocate for cancer patients across the country, helping teach patients how to communicate with their doctors.

Five years after undergoing surgery to remove his prostate gland, Nowak learned that his prostate cancer had returned and spread, or metastasized, to his lymph nodes. At the time, this metastatic prostate cancer (MPC) had few treatment options, and he hoped that he could participate in research that might reveal how to stop the disease. Soon after, he was approached by scientists at the Broad Institute of MIT and Harvard and the Dana-Farber Cancer Institute, who noticed Nowak’s advocacy work as founder of an advocacy nonprofit, CancerABC’s, and asked him to help design and later be the inaugural patient for their new Metastatic Prostate Cancer Project (MPCproject).

The MPCproject is a first-of-its-kind data-gathering initiative launched in 2018 by collaborators at the Broad and Dana-Farber to better understand the genetics and biology of MPC, which can drive different patterns of disease. It falls under the larger umbrella of Count Me In, an initiative that launched its first project in 2015 with the goal of giving cancer patients from diverse geographical, racial, and socioeconomic backgrounds opportunities to participate in research that has often excluded them.

In a paper published in Cell Genomics, MPCproject researchers—led by Broad associate member and Dana-Farber oncologist Eliezer Van Allen, Jett Crowdis, Sara Balch and colleagues in the Broad Cancer Program—have reported the results of the first four years of the project. With the help of patient advocates, the team has successfully partnered with over 1,000 men with MPC across the United States and Canada. In addition to confirming previous genetic findings for MPC, and establishing that a sampling approach called blood biopsies can indeed make cancer discoveries, they have also highlighted that the project’s genomic database will be publicly available for scientists to make their own discoveries while underscoring the power of patient-participation in cancer research.

“This is patient-driven from start to finish—they designed every pixel on the website all the way through to being co-author’s on a scientific manuscript,” said Van Allen, noting that a number of advocates are authors on the paper. “It’s just the beginning, and we need to thank the many advocacy groups that we’ve been able to work with over the years.”

The MPCproject’s patient-first approach is clear from its design. Participants can complete all steps online at www.MPCproject.org, a website designed alongside patients and caregivers. When someone signs up for the project, they give consent to sharing copies of their medical records, answering survey questions about their experience, and sharing a saliva sample. Participants can also opt-in to sharing portions of their tumor tissue and/or blood sample(s), all of which allow researchers to examine the genetic features of a participant’s cancer. And Balch, Crowdis, and Van Allen admit that without patient input, they wouldn’t have known about some of the intricacies of communicating with men with MPC. Some of the most fundamental changes to the project—including designing nondescript boxes for saliva donation—arose from discussions with patients about how their data would be collected and shared.

When Nowak agreed to help design the project, to which he would later be its first participant, he asked how patients would be updated about the discoveries that his saliva and blood samples were enabling. Because of his long history of participating in clinical trials—which traditionally aren’t allowed to share data directly to patients and don’t publish their results until they are complete—he hoped that the team could publish their genomic findings as they came along.

After consulting with Nowak and cancer advocates, the team decided they would release genetic findings online on a regular basis. Those deidentified live releases—three of which have been made available to date—could help clinicians identify treatment courses that may avoid unnecessary side effects for patients with certain tumor mutations, and also afford scientists at other institutions the opportunity to explore the data and make their own discoveries.

While most cancer research trials rely on direct tumor biopsies, the MPCproject also leverages blood biopsies, which contain cell-free DNA (cfDNA) from the tumor floating in the bloodstream. This is a new approach, and at the outset the project’s leaders weren’t sure how easily their framework would enable new discoveries. So it was promising when they found molecular signatures of known cancer-related mutations in cfDNA that repeated previous findings.

The team also discovered that known changes in the androgen receptor could be detected from blood, even in patients with low disease burdens. Taken together with patients’ medical histories, clinicians could use those genetic results to trace the trajectory of a patient’s cancer.

“That’s what it’s all about: understanding their genetics and what mutations they have, and then looking at what treatments have and haven’t worked for them,” Nowak explained. “By putting together all of this information, we can make better clinical decisions.”

Most North American MPC patients are treated in community settings, but unless they live near major cancer research institutions, it can be hard for them to participate in cancer research trials. This is especially true for genomic studies, since only academic institutions generally have the infrastructure to support them. Cancer patients in rural areas have thus been largely excluded from genomic research, which can leave major gaps in the data available for research.

“It’s becoming more important for both patients and providers from all parts of the country to learn more about the genetics behind the disease and to extend our reach into these areas through patient partnership,” Crowdis said.

The MPCproject has shown that some of these geographical gaps can be closed by going to patients directly; the team reported that 41% of project participants live in rural or underserved communities. But the project team realizes that they have not yet recruited enough Black men—who are more likely to get MPC at a younger age and are often subject to harmful health disparities in their cancer treatment—to gain a representative picture of the larger MPC population.

“The lack of racial representation in this project is a critical flaw,” Crowdis said, acknowledging that many genetic and genomic research efforts have exploited historically marginalized communities, leading to mistrust. “Without it, I don’t think the project can be considered a success.”

To address these concerns, the MPCproject has worked with community-based advocates to build trust in historically marginalized populations. Along with Count Me In leaders, they’ve created a campaign that amplifies Black cancer patients’ stories.

Advocate Idola Henry Gunn—a retired Air Force officer and caregiver to her late husband Arthur, also an Air Force veteran—believes that one of the best ways to expand the project’s reach to men from underserved communities is by providing them with educational materials early on. She said that Arthur received outstanding health care after his late-stage prostate cancer diagnosis, however both were unaware of resources available to African American men and their families prior to and immediately after his diagnoses.

“You need to target those communities and get in there from the ground up,” Gunn said. “Introduce it to young doctors when they’re going through school, because then they can go back and tell their dads and their uncles. It’s about introducing it way before folks are in a position where they are inundated with information.”

Ultimately, patients and advocates agree that the project could drive new discoveries that may shape MPC treatment plans down the line. For Nowak, who has witnessed the list of available treatments significantly expand in the years he has lived with prostate cancer, it’s his duty to participate in research for future patients, possibly even those in his own family.

“When I was diagnosed 20 years ago, there were three treatments. Now there are many, and those have only been developed and tested and shown to be beneficial through other people who’ve participated in the research and trials themselves,” Nowak said. “I think we need to remember that just as people in front of us have taken risks for us, we should certainly take this step.”