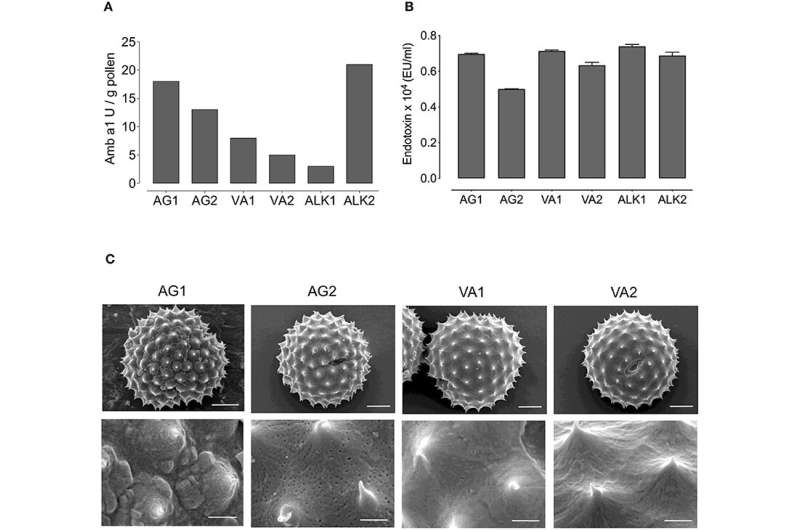 The different geographic and climatic regions from which ragweed pollen originates, as well as the degree of environmental pollution, may influence the severity of allergic reactions such as hay fever and asthma. Pollen from plants in different areas exhibit different levels of aggressiveness. This is the conclusion reached by an inter-university study team led by MedUni Vienna and involving the University of Vienna and the University of Natural Resources and Applied Life Sciences. The study was recently published in the journal Frontiers in Allergy.

The research team developed an allergy model in which mice inhaled pollen from ragweed plants (Ambrosia artemisiifolia) collected in different geographic locations. They found that even a small amount of pollen (a total of 180 pollen grains) is sufficient to produce an allergic reaction, much less than the high pollen concentrations found in the air during the seasonal flowering period. As a result of climate change, the European flowering season is getting longer, and the plant is able to spread to more northerly areas. Furthermore, the regional origin of the pollen determines the severity of the allergic reaction it produces. The lead researcher and coordinator of the Atopica project, Michelle Epstein from MedUni Vienna, explained: “Our study shows that pollen from distinct environments can differ in its aggressiveness. So not only the concentration of the pollen in the air but also intrinsic changes (from within) related to the environment could alter the pollen’s ability to sensitize and cause more severe allergic symptoms.”

Wolfram Weckwerth, Professor at the Department of Functional and Evolutionary Ecology of the University of Vienna and one of the authors, said: “We now know that environmental factors change the aggressiveness of pollen. The next steps are further characterization of the pollen, especially at the molecular level, to unambiguously identify the mixture of allergenic components.” Anke Bellaire, a collaborator at the Department of Structural and Functional Botany at the Department of Botany and Biodiversity, University of Vienna, and also one of the authors, added: “Following these exciting results, we plan to continue ultrastructural subcellular analysis of ragweed pollen for further characterization.”

Gerhard Karrer, professor of botany at the University of Natural Resources and Applied Life Sciences, who was part of the team that collected the pollen in Austria, said: “The control of ragweed is a major public health concern and an adaptation strategy for mitigating and managing the impacts of climate change.”

According to the researchers, there is a high probability that climate change and other environmental factors will also affect a number of other pollen-producing plants. This applied research model now provides a strategy for further studies investigating the impacts of climate change on pollen allergy.