Getting drugs off the roads 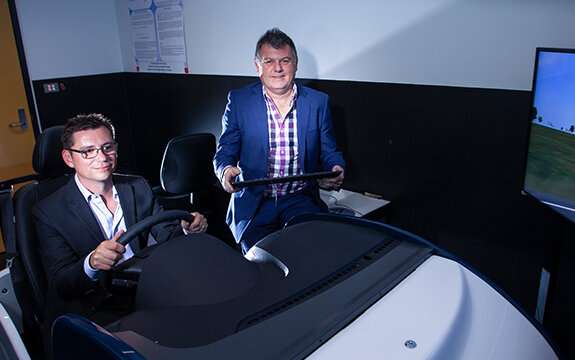 Australians are well aware of the dangers of drink driving. Drinking can reduce your coordination and concentration, reduce your ability to judge speed and distance, and slow your reaction times.

Drugs can have similar effects. With the increased use of drugs in our communities in the past 10 years, drugs have overtaken alcohol as the leading cause of fatal crashes in Australia and in many other countries.

Following on from the successful introduction of random breath testing in Australia to reduce drink driving, research at Swinburne’s Drugs and Driving Research Unit helped to enable the introduction of roadside drug testing for the first time in the world.

Police and VicRoads, Swinburne researchers from psychology, neuroscience and medical disciplines worked together to verify that drivers using cannabis and methamphetamine (speed) had an increased crash risk.

Volunteers were given prescribed doses of cannabis, methamphetamines and other substances, and then their driving performance, cognition and mood was measured under simulated conditions. These drugs were shown to affect a person’s ability to drive safely by disrupting normal cognitive behaviour and psychomotor functioning.

The unit, in collaboration with the Victorian Institute of Forensic Medicine, also evaluated the reliability of several commercially available drug testing devices. The research provided evidence that saliva tests could sensitively and reliably detect selected drugs in drivers, and that the saliva testing equipment was suitable for roadside field use.

The Road Safety (Drug Driving) Act 2003 was the first legislation of its type to be introduced anywhere in the world. It enabled police to perform roadside saliva testing on drivers for the detection of tetrahydrocannabinol (THC; an active component in cannabis), methamphetamine – including its most potent crystalline form (ice) – and MDMA (ecstasy).

This represents the number of drug-affected drivers that have been detected driving on our roads as a result of Swinburne research. The research has also raised awareness of driving under the influence of drugs and is helping to deter drug-affected people from driving.

Inspector Martin Boorman, Victoria Police, said, “The work Swinburne did with Victoria Police and VicRoads and the role it played in the introduction of the drug- driving enforcement program in Victoria was significant.

Since 2004, road deaths in Victoria have decreased by 25%, representing thousands of lives. This can’t be directly attributed to the roadside saliva tests, but it is encouraging to see that the biggest drop has been in drivers under the age of 25 years, which is the group most likely to use drugs.