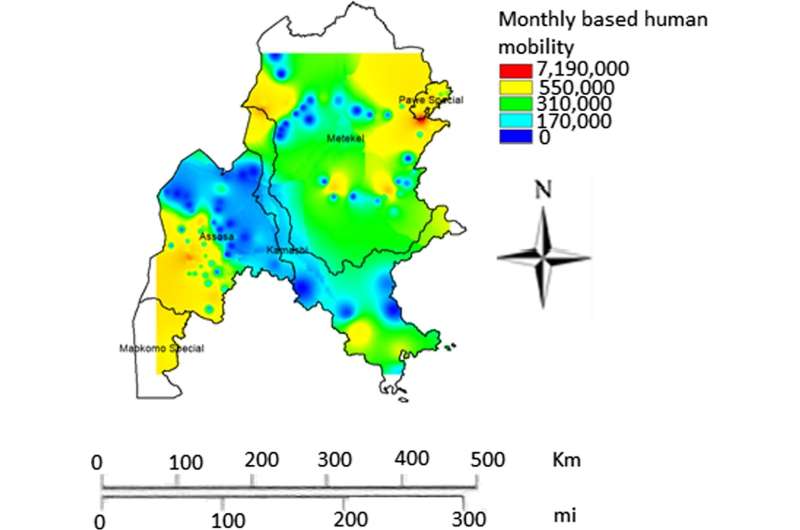 The spread of malaria is dependent on Anopheles mosquitoes that spread the disease, and it persists in places where these types of mosquitoes exist and where there are enough people to keep the parasite thriving in humans. Human movement between locations can lead to the movement of malaria parasites across long distances, and when malaria parasites are transported to places that have the right kind of mosquitoes, they can persist in those new places.

In a paper recently published in Malaria Journal, global health researchers Daniel Parker, Ph.D., assistant professor; and Guiyun Yan, Ph.D., professor, both from the UCI Program in Public Health, analyzed the movement ecology of humans in two places of heightened importance for Ethiopia’s malaria control and elimination strategies: Gambella and Benishangul-Gumuz (on the international border with Sudan and South Sudan).

Ethiopia has a unique landscape in that its population centers tend to be in high-elevation places; places that have historically been too cold (for at least part of the year) for malaria-spreading mosquitoes to thrive. This is likely changing because of climate change.

The two regions that Parker and Yan looked at consistently have the highest burdens of malaria in the nation. Movements of people between these regions can likewise lead to transportation of parasites to other regions. This can lead to disruptions in local public health successes by reintroducing parasites to places that have controlled malaria but still have the right mosquitoes to spread the disease. Increasingly, it could lead to the introduction of parasites in places that only recently have the right kind of mosquitoes to spread malaria—which could catch some previously non-malarious places by surprise.