Nearly HALF of global cancer deaths are preventable: 4.5million fatalities due to external factors like smoking, alcohol or being too fat

Nearly 4.5million cancer deaths every year are caused by external factors such as alcohol, smoking or obesity, according to a major study.

The research, published in The Lancet, suggests millions of lives lost to the disease globally every year are preventable.

US experts reviewed the impact of occupational, environmental and behavioural risk factors on the 23 deadliest cancers around the world.

They estimated 4.45million (44.4 per cent) of cancer deaths that occurred in 2019 were due to external factors — with smoking, alcohol use and a high body mass index (BMI) the leading risks.

This was estimated to be even higher in the UK, with 49.7 per cent of cancer deaths due to lifestyle choices and environmental exposure.

The vast majority of the global cancer deaths from external factors, 3.7million, were due to factors like smoking, drinking and eating unhealthily.

In total, cancers caused by these habits led to people losing a combined 87.8million years of healthy life to premature death or disability.

The study also found men were more at risk at losing years of their life to cancer than women due to smoking and drinking more and working dangerous jobs. 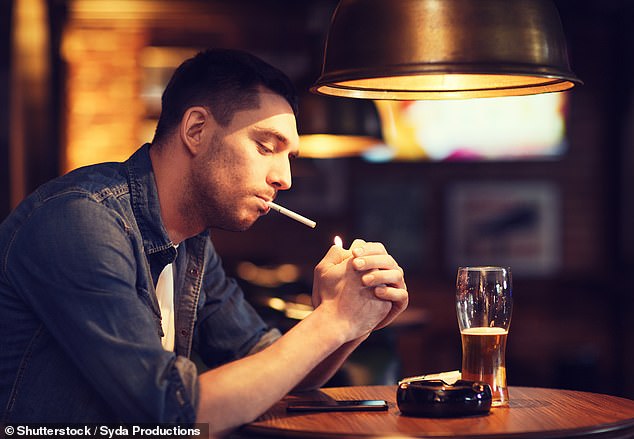 Things like smoking and drinking were responsible for causing cancers that killed nearly 4.5million people around the world in 2019 according to major study (stock image)

This colour map shows the number of years of life to disability caused by to cancers triggered by behavioural risk factors, like drinking and smoking, around the world. Countries in dark blue shows areas where years were lost from these factors were the lowest, while red shows nations are where they were the highest. Both the UK and the US are in the orange tier, the second highest

The dangers of secondhand smoking have been known for decades, but now scientists are warning about a new threat — thirdhand smoke.

A study in the US found even just handling a cigarette smoker’s clothing is enough to expose people to dangerous levels of cancer-causing chemicals.

Secondhand smoke is when exhaled fumes or the smoke from the end of a cigarette is breathed in by someone else.

Thirdhand smoke forms when particles from a cigarette seep into materials like hair, clothes and furniture and carpets.

Government researchers at the Berkeley Lab in California carried out a series of experiments on humans and mice.

In one study, three volunteers who did not smoke were asked to wear the clothes of a heavy cigarettes user for three hours.

Tests showed they had up to 86 times higher levels of toxic compounds known as NNK and NNN in their urine after the experiment.

In another study, researchers exposed the same carcinogens to human lung tissue and showed they can cause DNA damage — which is one of the triggers of cancer.

Globally, over a third (36.9 per cent) of cancers deaths caused by external factors were caused were in the  lung, bronchus and tracheal cancers, the most of any type of cancer.

This is in part due to how smoking raises the risk of developing these types of cancers, with tobacco the single biggest contributor to the 4.45million deaths.

In the study, researchers from the University of Washington looked at 34 risk factors related to death and disability from 23 types of cancer in 2019.

‘This study illustrates that the burden of cancer remains an important public health challenge that is growing in magnitude around the world,’ he said.

‘Smoking continues to be the leading risk factor for cancer globally, with other substantial contributors to cancer burden varying.’

The study also found cancer deaths due to external factors were on the rise globally compared to nearly a decade ago.

Researchers found deaths due to had increased 20 per cent in 2019 compared to 2010 levels.

There was also a gender divide, with men far more likely to die from cancer caused by external factors than women.

For men, 2.88million deaths, half (50.6 per cent) of the total recroded for males, were caused by factors like smoking, drinking and obesity.

Whereas for women, only 36 per cent of cancer deaths were caused by exposure to external factors.

Tracheal, bronchus, and lung cancers, all related to the body’s airways, were the biggest single type of cancer caused by external reasons for both men and women.

These cancers, which accounted for 37 per cent of all global deaths linked to preventable factors, can be caused by smoking.

For men the next most common cancers to die from were colon and rectum cancer (13 per cent), oesophageal cancer (10 per cent), and stomach cancer (7 per cent).

Men were found to have a four-fold higher risk of losing years of their life to cancer from lifestyle choices than women, something the researchers attributed to men being more likely  to smoke and drink.

They were also three times more likely to get cancer as result of their work, suggesting men more frequently work in places they could be exposed to carcinogens, substances that can cause cancer.

Men at high risk of developing prostate cancer could be diagnosed earlier if genetic weaknesses were considered by GPs, research reveals.

A fifth of annual suspected prostate cancer referrals could be fast-tracked for investigation, while another 40 per cent could avoid referral and invasive biopsies if a genetic risk for cancer was included into GP triage.

Fast-tracking men at most risk could lead to earlier diagnosis and treatment, improving survival rates.

GPs make about 800,000 suspected prostate cancer referrals annually in the UK. Some 160,000 men could be fast-tracked and 320,000 could avoid referral if genetic risk was considered as a factor, according to the study by the University of Exeter, published in the British Journal of Cancer.

The team combined more than 250 known genetic variants linked to the disease into a single ‘score’ to describe an individual’s genetic risk of developing prostate cancer.

Prostate cancer accounts for around a quarter of new cancer cases in men – about 52,000 men are diagnosed every year in the UK alone.

Globally, central Europe was the hotspot for cancer deaths due to risk factors, with 82 deaths per 100,000 population.

Western Europe, which includes the UK, had fifth highest cancer death rate in the study, with 63.8 deaths per 100,000.

Britain recorded a cancer death rate of 73.8 per 100,000 for external factors in the study.

For behaviorual factors alone, such as drinking and smoking, the UK’s cancer death rate was 57.8 per 100,000.

Dr Lisa Force, another population health expert involved in the study and also of Washington, said the findings demonstrated the importance of health interventions, like smoking cessation programmes, to reduced preventable cancer deaths.

‘Policy efforts to reduce exposure to cancer risk factors at the population level are important and should be part of comprehensive cancer control strategies that also support early diagnosis and effective treatment,’ she said.

Professor Diana Sarfati and Dr Jason Gurney of the University of Otago, New Zealand, who were not involved in the study, said cancer prevention through reducing behaviours and exposures that increase risk was the ‘best hope’ of saving lives from the disease.

‘Reducing this burden will improve health and wellbeing and alleviate the compounding effects on humans and the fiscal resourcing pressure within cancer services and the wider health sector,’ they said.

In the study the researchers analysed data in the Global Burden of Diseases, Injuries, and Risk Factors report ,which contains health and mortality information from 204 countries.

One limitation in the study, which the authors acknowledge, is that data from lower income countries for cancer is less complete than that from higher income nations.

Charity Cancer Research UK estimates about four in 10 cancers in the UK are preventable.

The charity says the single biggest cause of cancer in the UK is smoking, which triggers about 15 per cent of British cancers.