Breast cancer survivors may soon know exactly how likely their cancer is to come back.

A new test offers women peace of mind through predicting their risk of getting breast cancer again in the next 20 years.

Scientists have examined tumours to find there are 11 different types of breast cancer, all with separate risks of relapsing.

They can now identify those women who do not need to worry because they are in a group mostly likely to be cured after five years.

Simply by looking at genes in breast cancer tumours, they can also break the news to some women that their cancer has a 62 per cent chance of coming back in 20 years. 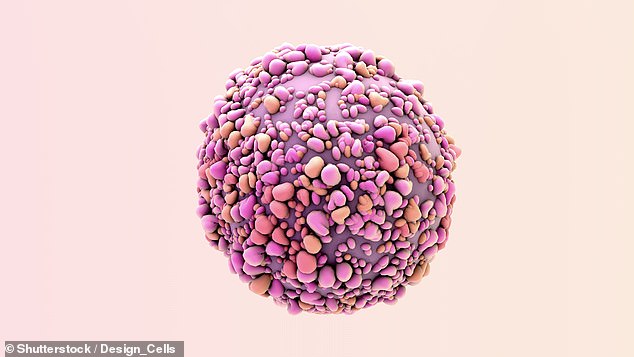 The good news for these patients is that doctors can then keep a closer eye on them, or keep them on the drug tamoxifen which makes it less likely their breast cancer will return.

More than 14,000 breast cancer survivors in Britain are believed to fall into this unlucky ‘late-relapsing’ group.

The test, developed by a team including the University of Cambridge and Stanford University, was developed by analysing the tumours of nearly 2,000 breast cancer patients and tracking their health over an average of 14 years.

Researchers say a simpler version could be available for doctors to use within five years.

‘But unfortunately for some women, their breast cancer returns and spreads, becoming incurable.

‘For some, this can be many years later – but it’s been impossible to accurately predict who is at risk of recurrence and who is all clear.

‘In this study, we’ve delved deeper into breast cancer molecular subtypes so we can more accurately identify who might be at risk of relapsing and uncover new ways of treating them.’

Currently doctors work out if someone’s cancer will come back by looking at things like the tumour size and aggressiveness, the patient’s age, their type of breast cancer and time spent in remission since surgery.

WHAT IS SECONDARY BREAST CANCER?

The secondary cancer can take years to return, and does not always reappear in the breast.

Some 35,000 people are thought to be living with the disease –  some 35 per cent of women who get breast cancer will be diagnosed with secondary cancer within 10 years.

While primary breast cancer can usually be operated on or cured with drugs or radiation, secondary cancer is incurable.

Because secondary cancer has already started spreading around the body you can never be completely cured of it.

But chemotherapy, hormone drugs and other treatments can slow down the growth and spread of tumours and improve patients’ lives.

Life expectancy varies depending on how advanced the cancer is, but many women live for years with the condition under control.

But scientists can be far more precise by looking at genes in their tumours.

Multiple copies of genes that trigger cancer, or help cancer cells to divide, put unlucky women with two types of breast cancer into an ‘aggressive’ group with a high chance their cancer will come back.

In women with the deadliest form of breast cancer, called ‘triple-negative’ breast cancer, scientists found some have a tiny risk of this cancer coming back if they survive the first five years after treatment.

But for women with the same cancer but more unlucky genes, the risk of getting breast cancer again is 50 per cent higher after 20 years.

The same lottery was found for a type of breast cancer affecting three-quarters of patients, where tumours are ‘oestrogen receptor-positive’, meaning they need the hormone oestrogen to grow, but negative for a protein called HER2.

There were eight groups of patients for this cancer type – four with a good chance that their cancer would not come back.

But the quarter of women with this type of cancer who fall into the other four groups have a risk of 47 to 62 per cent of getting breast cancer again in 20 years.

Experts believe that people relapsing after this type of cancer do so because they do not respond well to radiotherapy, chemotherapy and drugs designed to eradicate cancer cells from the body.

These can come ‘back to life’ many years later, causing someone to get cancer again.

The researchers also worked out relapse rates for women with HER2-positive breast cancer, but say these are out of date because the patients in the study did not have access to a relatively new drug called Herceptin.

The results, published in the journal Nature, also reveal triple-negative breast cancer is more likely to spread to the brain, while oestrogen receptor-positive, HER2-negative cancer more often spreads to the bone.

Next researchers will investigate different treatment options for the 11 breast cancer groups they have found.

Professor Karen Vousden, chief scientist for Cancer Research UK, said: ‘One in seven women will get breast cancer in their lifetime in the UK, and we hope that research like this will mean that if faced with the disease, even more of our daughters and granddaughters will survive.’

WHAT IS BREAST CANCER, HOW MANY PEOPLE DOES IT STRIKE AND WHAT ARE THE SYMPTOMS?

What is breast cancer?

Breast cancer develops from a cancerous cell which develops in the lining of a duct or lobule in one of the breasts.

When the breast cancer has spread into surrounding breast tissue it is called an ‘invasive’ breast cancer. Some people are diagnosed with ‘carcinoma in situ’, where no cancer cells have grown beyond the duct or lobule.

Most cases develop in women over the age of 50 but younger women are sometimes affected. Breast cancer can develop in men though this is rare.

The cancerous cells are graded from stage one, which means a slow growth, up to stage four, which is the most aggressive.

A cancerous tumour starts from one abnormal cell. The exact reason why a cell becomes cancerous is unclear. It is thought that something damages or alters certain genes in the cell. This makes the cell abnormal and multiply ‘out of control’.

Although breast cancer can develop for no apparent reason, there are some risk factors that can increase the chance of developing breast cancer, such as genetics.

What are the symptoms of breast cancer?

The usual first symptom is a painless lump in the breast, although most breast lumps are not cancerous and are fluid filled cysts, which are benign.

The first place that breast cancer usually spreads to is the lymph nodes in the armpit. If this occurs you will develop a swelling or lump in an armpit.

How is breast cancer diagnosed?

If you are confirmed to have breast cancer, further tests may be needed to assess if it has spread. For example, blood tests, an ultrasound scan of the liver or a chest x-ray.

How is breast cancer treated?

Treatment options which may be considered include surgery, chemotherapy, radiotherapy and hormone treatment. Often a combination of two or more of these treatments are used.

How successful is treatment?

The outlook is best in those who are diagnosed when the cancer is still small, and has not spread. Surgical removal of a tumour in an early stage may then give a good chance of cure.

The routine mammography offered to women between the ages of 50 and 70 mean more breast cancers are being diagnosed and treated at an early stage.