How do we know where things are?

Our eyes move three times per second. Every time we move our eyes, the world in front of us flies across the retina at the back of our eyes, dramatically shifting the image the eyes send to the brain; yet, as far as we can tell, nothing appears to move. A new study provides new insight into this process known as “visual stabilization”. The results are published in the Proceedings of the National Academy of Sciences.

“Our results show that a framing strategy is at work behind the scenes all the time, which helps stabilize our visual experience,” says senior author Patrick Cavanagh, a research professor in psychological and brain sciences at Dartmouth and a senior research fellow in psychology at both Glendon College and the Centre for Vision Research at York University. “The brain has its own type of steadycam, which uses all sorts of cues to stabilize what we see relative to available frames, so that we don’t see a shaky image like we do in handheld movies taken with a smartphone. The visual world around us is the ultimate stable frame but our research shows that even small frames work: the locations of a test within the frame will be perceived relative to the frame as if it were stationary. The frame acts to stabilize your perception.” 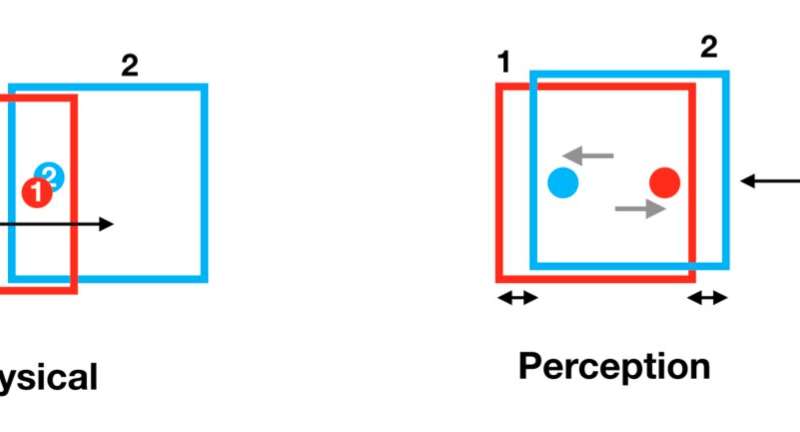 The study consisted of two experiments that tested how a small square frame moving on a computer monitor affected participants’ judgments of location. The experiments were conducted in-person: eight individuals including two of the authors; and also online due to the COVID-19 pandemic: 274 participants were recruited from York University of which 141 had complete data. The data were very similar for both types of participants.

In Experiment 1, a white, square frame moves left and right, back and forth, across a gray screen and the left and right edges of the square flash when the square reaches the end of its path: the right edge flashes blue at one end of the travel and the left edge flashes red at the other, as shown in the figure. Participants were asked to adjust a pair of markers at the top of the screen to indicate the distance they saw between the flashed edges. Experiment 1 had two conditions. The first condition evaluated how far apart the outer left and right edges of the square frame appeared. In this example, the frame travel is longer than the frame size so the red flash is physically to the left of the blue flash. When the frame is moving slowly at the start, we see the flashes where they really are, with red to the left. However, once the frame is moving fast enough, blue is seen left of red. This is where they would be, if the frame were actually stationary. The moving frame fools us by stabilizing our judgments of location. Further on in the movie, the frame briefly fades out to reveal that the red flash is actually to the left of the blue flash, which has been the case the entire time.

The second condition assessed the travel of the frame’s physical edge. The left edge flashes at each end of the frame’s travel and the distance the frame travels is seen as the space between the two flashes.

The data from both conditions of Experiment 1 demonstrated that participants perceived the flashed edges of the frame as if it were stable even though it was clearly moving, illustrating what the researchers call the “paradoxical stabilization” produced by a moving frame.

Experiment 2 again demonstrated the stabilizing power of a moving frame by flashing a red disk and a blue disk at the same location within a moving frame. The square frame moves back and forth from left to right while the disk flashes red and blue in alternation. As in Experiment 1, participants were asked to indicate the perceived separation between the red and blue disks. Even though there is no physical separation between the disks, the moving frame creates the appearance that the two disks are located to the left and right of their true locations, relative to the frame where they flashed. In other words, participants perceived the location of the disks relative to the frame, as if it were stationary and this was true across a wide range of frame speeds, sizes, and path lengths.

“By using flashes inside a moving frame, our experiments triggered a paradoxical form of visual stabilization, which made the flashes appear in positions where they were never presented,” says Cavanagh. “Our results demonstrate a 100% stabilization effect triggered by the moving frames—the motion of the frame has been fully discounted. These data are the first to show a frame effect that matches our everyday experience where, each time our eyes move, the motion of the scene across our retinas has been fully discounted making the world appear stable.”

“In the real-world, the scene in front of us acts as the anchor to stabilize our surroundings,” Cavanagh says. Discounting the motion of the world as our eye move makes a lot of sense, as most scenes (i.e. house, workplace, school, outdoor environment) are not moving, unless an earthquake is occurring.

“Every time our eyes move, there’s a process that blanks out the massive blur caused by the eye movement. Our brain stitches this gap together so that we don’t notice the blank, but it also uses the motion to stabilize the scene. The motion is both suppressed and discounted so that we can keep track of the location of objects in the world,” says Cavanagh.