How to Crush the CrossFit Open 20.3 Workout

CrossFit just announced Open Workout 20.3, the latest challenge in the 20th go-round of the CrossFit Open. And get this: It’s actually one of the smartest CrossFit Open workouts you may ever find yourself doing.

It’s not easy (in fact, it’s brutally, brutally hard), but, unlike other Open workouts, this one isn’t the kind that’s destined to leave you as an injured pile of mush. Instead, this one is built around two exercises, one of which you either know how to do, or have no prayer of doing at all.

The two-part workout blends deadlifts and handstands. Everyone who hangs around a CrossFit box is familiar with the deadlift. But handstand walks, which show up in the final phase of this workout, aren’t something everyone can pull off. And if you can’t do the handstand walk, you simply can’t complete the RXed version of this workout. You either have the shoulder stability (and total body control) to do a handstand walk, or you don’t.

And that means more people than ever will do the scaled version of Open Workout 20.3, leaving plenty of battered shoulders to live to fight another day. 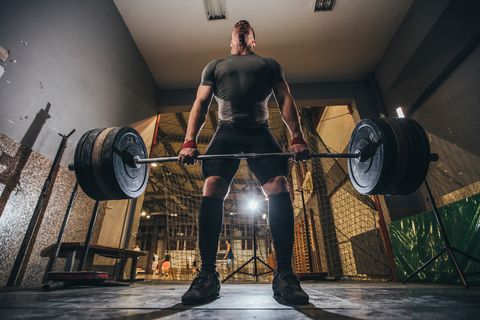 So what is Open Workout 20.3? It’s back-to-back 21-15-9 ladder-downs of deadlifts broken up by handstand work. The first ladder-down has you doing 21 deadlifts, followed by 21 handstand pushups, then 15 of each move, then 9. Men doing the RXed version will deadlift 225 pounds; women will deadlift 155 pounds.

Complete that ladder, and you do another 21-15-9 ladder-down of deadlifts, this time upping the weight to 315 for men, 205 for women. In between each set of deadlifts, you do a 50-foot handstand walk.

Your score is your time to complete the workout. There’s a 9-minute overall time cap.

Plenty of people won’t be able to pull off the RXed workout, simply because handstand walks are, hard, perhaps one of the hardest skills taught in any CrossFit box. Because of that, expect to see more people than ever in your box doing the scaled version. To scale 20.3, you’ll nix the handstand pushups and to hand-release pushups instead, lowering your chest to the ground, lifting your hands off the ground, then returning them to the ground and pressing back up to plank position.

You’ll also drop the handstand walks and do 50 feet of bear crawls instead. Weights will drop off as well. Men will open their deadlifting at 135 pounds and escalate to 185; women will open at 95 and increase to 135.

Why We Love CrossFit’s 20.3 Workout 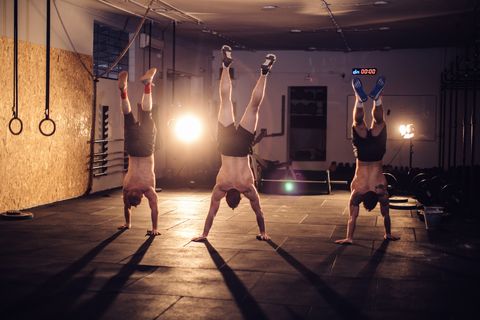 I’ve been critical of CrossFit’s Open workouts in the past, in large part because many of them encourage people who lack proper shoulder stability to do moves that challenge shoulder stability in ways that aren’t safe for longterm joint health.

That’s where 20.3 manages to be magical. Here’s the thing with the handstand walk: You’ve either got it or you don’t. This isn’t a heavy dumbbell snatch, where somebody can muscle up too much weight in awkward, labrum-tearing fashion. And it’s not a kipping pullup sequence where somebody else can blow out a rotator cuff while pretending their aerial worm of a flail is actually a proper kip.

Being able to handstand walk almost assuredly means you have strong, consistent shoulder stability and control of your body. Sure, you can arch your back plenty on these and that’s not ideal (and yes, some people will feel 20.3 in their lower backs on the morning after). But by and large, you’ll either know you have a chance of doing the RXed version of 20.3, or know full well that you shouldn’t even waste brain cells pondering it too much and just opt to do the scaled version.

Here’s the thing with the handstand walk: You’ve either got it or you don’t.

And the scaled version is as safe a workout as you’ll see from a CrossFit box. A typical CrossFit sweat session almost always involves some level of overhead action. In the scaled version of 20.3, you never actually need your arms to exceed a 90-degree angle relative to torso unless you’re wiping the sweat off your forehead. Pushups and bear crawls are exceedingly safe ways to get upper body work.

Both workouts are smart in that they essentially challenge your full body and prioritize the posterior chain (on the deadlifts) before pushing you into some upper-body-focused work. You’ll get a total body burn from this one, and your hamstrings and glutes (and lower back, depending on your deadlift technique) will really feel this one. By workout’s end, you’ve done 90 deadlift reps.

Tips for Crushing the CrossFit 20.3 Workout 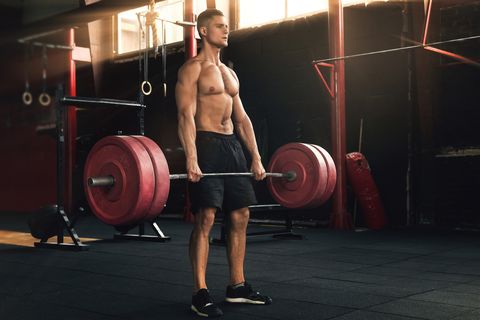 The key to tackling 20.3 comes down to handling those early deadlifts. You need to get them over swiftly, but you also need to safe your grip and your hamstrings (and lower back) for the challenge of the second ladder-down series.

Think strongly about using a mixed grip, even if that’s not how you normally train. It’ll prevent you from wasting valuable forearm strength, saving you for later.

If you’re fighting through the RXed version (in which case, you really don’t need our advice since you own your handstand movements), consider breaking up the first two sets of handstand pushups. Think of going 7-7-7 in the 21 set, and 5-5-5 on the 15 set. Sure, you could kip through the whole bunch, but you’re going to want your legs and lower body fresh when you reach that 21-set of 315-pound deadlifts.

If you’re going scaled, push through the pushups. Yes, CrossFitters often struggle with horizontal pressing movements and are stronger on vertical presses, but you’re still getting a pectoral break on each hand-release rep, so gut it out.

When you get to the final series of deadlifts, go in planning to break things up. You might want to break the 21-set into 4, and the 15-set into 3. Also, don’t forget your form. Sure, you’re trying to speed through these deadlifts, so you’ll be willing to compromise your lower back more than usual. But do you really have a shot at the games?

Yeah, that’s what we thought.

Overall, CrossFit Open Workout 20.3 is the best of CrossFit, brutally hard, over swiftly—and smart in how it self-selects who can do the RXed version and who can’t. We’d love to see more workouts like this, because they are challenging regardless of what version you do, but they save you from your own ambitions, which is fantastic.

The great thing about the scaled version is it’s still a great workout. Again, you’re piling up a whopping 90 deadlift reps, meaning serious booty and hamstring burn, and the hand-release pushups include a strongly underrated scapular squeezing moment too. And the bear crawls will hammer your core.

If you’re into CrossFit even a bit, 20.3 is a session worth trying. Don’t be afraid to scale though. Either way, your body will be on fire.