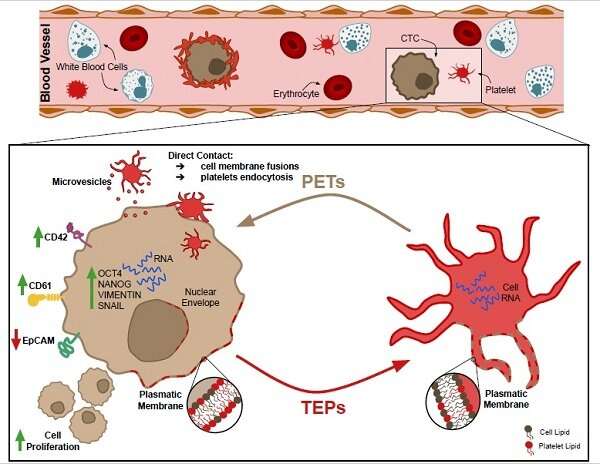 The Liquid Biopsy and Cancer Interception research group—part of the Biohealth Research Institute in Granada (ibs.GRANADA), in which researchers from the University of Granada (UGR) participate—has discovered that tumor cells pass themselves off as platelets to go undetected in the bloodstream.

This finding constitutes a paradigm shift in terms of how the metastatic process unfolds, and may contribute not only to a better understanding of the tumor process but also to the development of treatments for intercepting the process of tumor dissemination and, ultimately, the appearance of metastasis.

Metastasis is the leading cause of cancer-related death, due to the release of tumor cells from a primary tumor into the bloodstream, where they can travel to another organ and create a secondary tumor. These cells are known as Circulating Tumor Cells (CTCs) and, despite being known for their prognostic and predictive value as cancer biomarkers, little is known about their biology. CTCs are capable not only of detaching from the tumor mass but also of withstanding attacks from the immune system and colonizing distant organs.

This team of scientists from ibs.GRANADA , the UGR, GENyO, and the Virgen de las Nieves Teaching Hospital in Granada have demonstrated for the first time that platelets are capable of transferring biomolecules such as lipids, proteins, and ribonucleic acid to the CTCs, which helps them to go unnoticed in the bloodstream. In other words, tumor cells acquire part of the configuration of platelets to “trick” the body into believing they are platelets, enabling them to take over other organs.