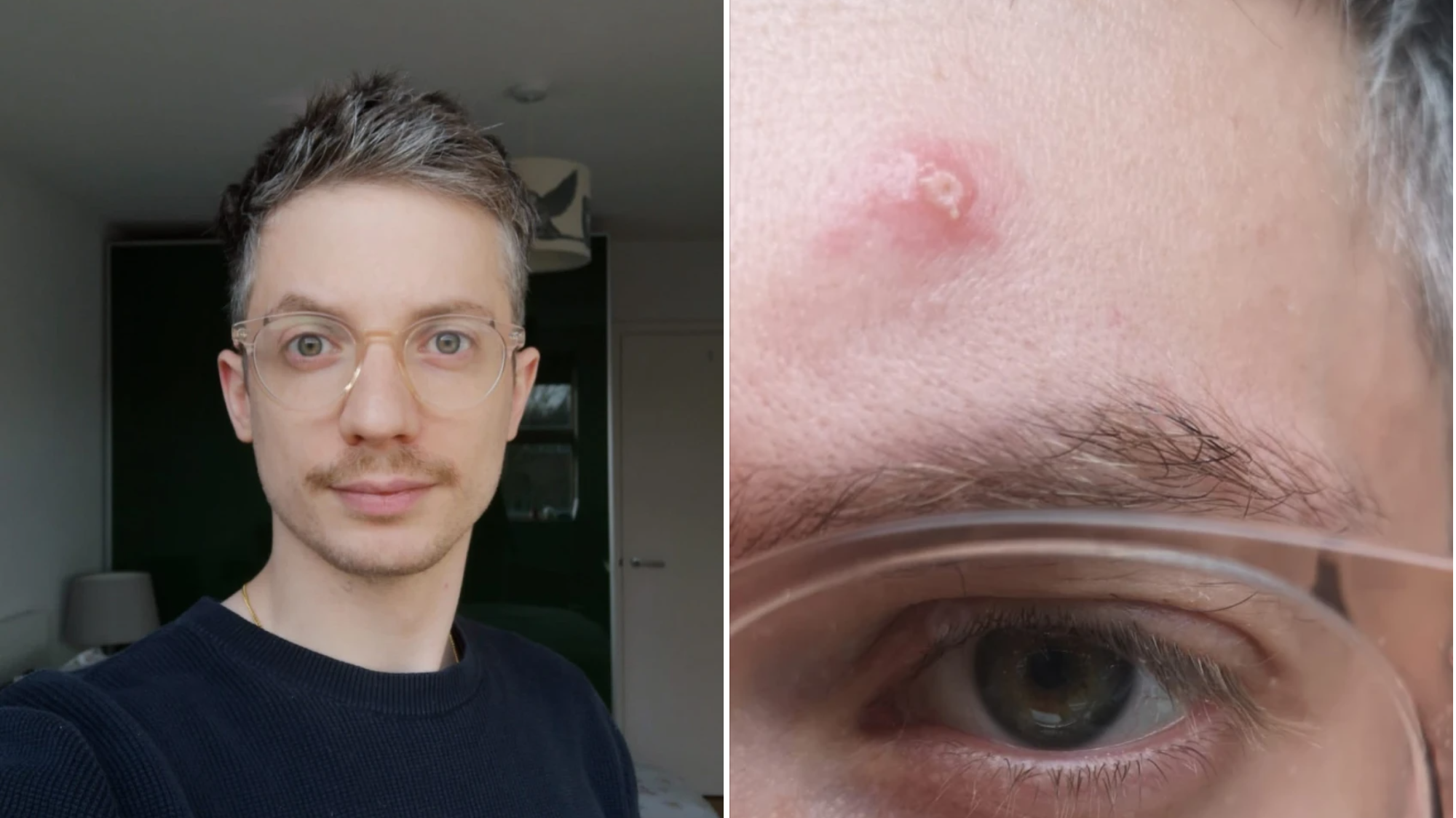 The past fortnight has been poxy, both literally and figuratively.

I type these words on the day my agonising two-week monkeypox sentence comes to an end, with a confusing mix of sadness and joy.

The first because, as we learned during the pandemic, mandatory self-isolation leaves its captive with something neighbouring Stockholm Syndrome.

The second because I’ll be allowed outside – helping me avoid real prison time for the strangulation of my over-attentive partner. I strongly suggest he does not ditch the day job for full-time care!

My symptoms kicked off with stomach cramps and aching muscles, which I respectively put down to an excess of rich food and a strenuous gym sesh in the days before.

Fever symptoms then joined the party, and although a Covid lateral flow test displayed only a single red line, I erred on the side of caution and cancelled that evening’s plans.

The following day, a spot appeared on my forehead. Nothing new, so I treated it with lotions and potions from my millennial mini apothecary.

The first real clue that something more sinister was afoot came when the zit, which had developed a small crater, began to resemble Vesuvius. Oh dear, was it a monkeypox lesion?

Google Images suggested that, yes, it could well be, but a search engine is no substitute for a medical professional.

I called Homerton Hospital, where a doctor initially suspected I was suffering from nothing worse than acne.

However, she later phoned back to say her colleague, a consultant, disagreed, and I was told to come in for a test.

To view this video please enable JavaScript, and consider upgrading to a webbrowser thatsupports HTML5video

Confusion ensued after I was told to travel the three-mile distance by foot.

So I masked my shame (another key character in this tale) with a plaster and took the Overground, having been instructed by the doctor to stick to a quiet carriage and keep my distance.

On arrival, I was greeted by a nurse and accompanied to what I reckon was a designated monkeypox room.

‘Don’t touch anything, thanks. Sorry, you understand.’

After two years of Covid, I was certainly familiar with this dance, but it still left me feeling slightly like a rabid mole-rat.

A doctor collected a sample, confirmed the spot was indeed lesion-like, and sent me off to isolate at home until the results came back.

Later that evening, the situation shifted from a little gloomy to proper grim, on the discovery of a second, much more painful lesion, and in a much more private area.

There was no doubt about it, I had monkeypox. It was staring back at me in the bathroom mirror.

I fixated on the unusual presentation of my infection.

These two lesions had surfaced days apart, but most patients, so says the internet, get them in the same location all at once.

My anxiety, which had been gently simmering until then, grew to a rolling boil. Would I soon look like a Domino’s order? Would I end up permanently scarred?

As it turns out, no and no, thank goodness.

In the three days that it took for the test results to verify what I already knew, the lesion on the dark side of the moon quickly graduated from sore to excruciating.

Neither ibuprofen nor paracetamol took the edge off to let me sleep or work..

Luckily – and I’m so grateful for this – the fantastic team at Homerton had been checking in every day to make sure I was coping. ‘Cocodamol should do the trick’, I was advised.

And to some extent, it did, though the physical and mental distress persisted.

I’ll tell you what I’m not grateful for, though: the UK Health Security Agency (UKHSA). By this time, a full week into the horror-house funfair ride that is monkeypox, they hadn’t been in touch once.

I’d expected a call for contact tracing purposes and perhaps even for my partner to access the smallpox vaccine. Nope! I was left worrying he’d catch it, but by the grace of some deity he didn’t.

When UKHSA did finally bother to drop me a line, the call handler asked a series of questions, including my sexuality and where I could have contracted monkeypox.

I told them I suspected that I caught it at the gym, which is normally where I’m surrounded by the highest concentration of people.

Erm, surely I’d misheard. Could she repeat herself? Ditto. I was flabbergasted but carried on regardless, only processing the severity of what I’d perceived to have happened once the conversation ended.

Afterwards, I emailed the call handler to complain, explaining that her question was especially distressing as it came: first, in a climate where the current monkeypox outbreak is widely perceived as a ‘gay disease’; and second, right after UKHSA downgraded its classification of the virus from ‘a high consequence infectious disease’ despite rising cases.

It wasn’t long before a senior comms officer reached out to let me know the call handler had, in fact, said, ‘It must have been a particularly sweaty gym’.

Anyway, this hellish imbroglio aside, my torture eventually subsided and I returned to work (remotely).

The long wait to de-isolate then commenced. Scabs soon formed on my lesions and, after clinging on like Boris Johnson in Number 10, eventually fell off.

This gave me the much-needed green light to re-enter society, where I found the perfect sun-drenched coffee shop patio to write this article.

The World Health Organisation just declared monkeypox ‘a global health emergency,’ so I suggest those at risk get the jab as soon as possible to avoid my fate.

There are now a number of monkeypox vaccine pop-ups across the UK, but many of them have been extremely overwhelmed since opening.

Some people have reportedly been forced to travel out of their home city to access the jab, while others say they have been turned away.

The government has promised to accelerate the vaccine’s rollout, but it remains to be seen whether this effort will be better coordinated than it is at present.

Monkeypox is here, it’s happening, and we can no longer avoid that fact.

As told to Steven Allison