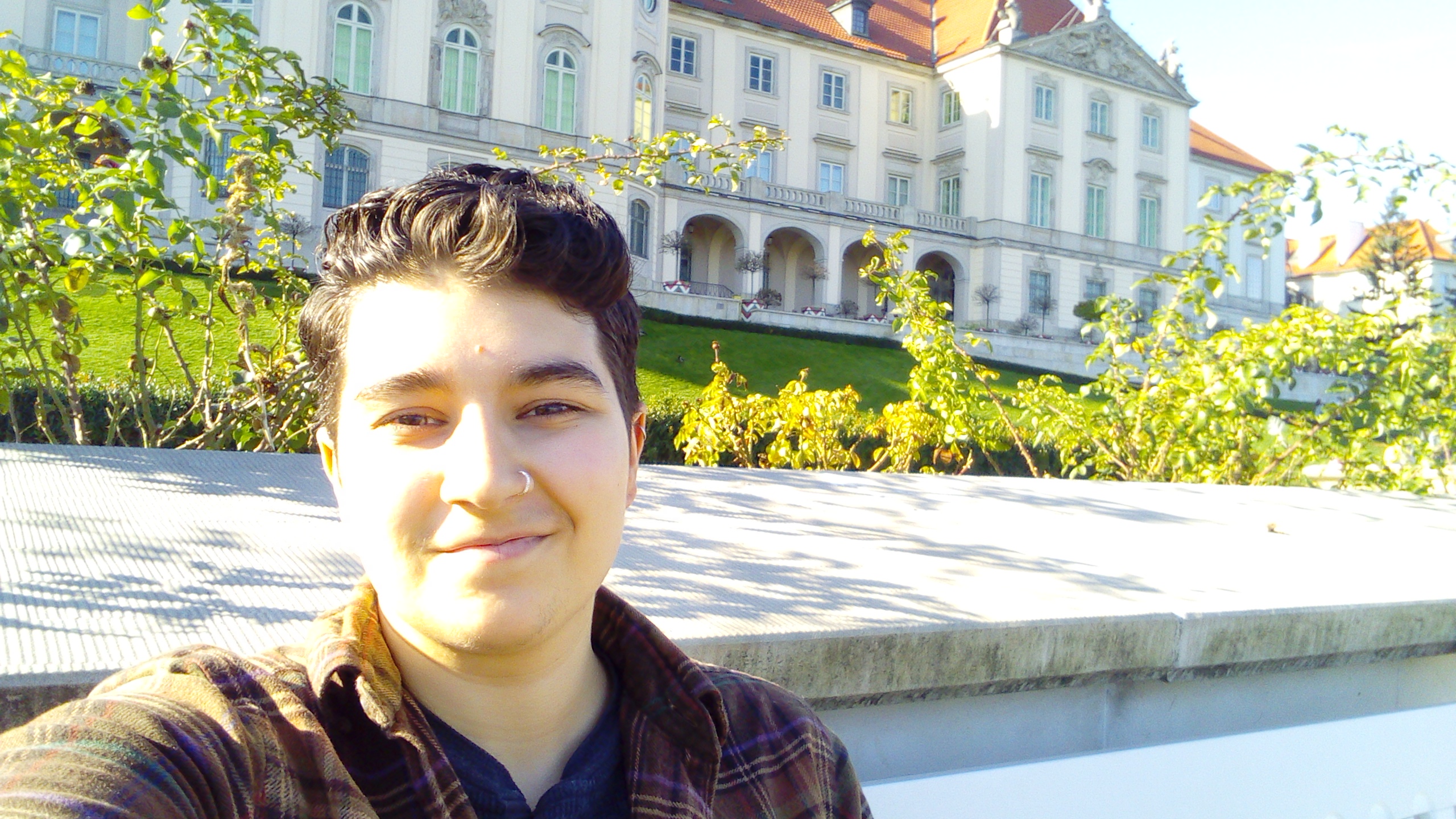 As I walked out of the Gender Identity Clinic in Northampton in March with a prescription for testosterone, I felt a mixture of happiness and excitement but also deep frustration and anger at how difficult it was to get to that moment.

It had been more than five years since I first reached out to access hormone treatment on the NHS.

There seems to be a popular misconception about how easy it is to transition, not helped by trans celebrities whose transformations often seem instantaneous. Sadly, experiences like mine – and much worse – are the reality for the vast majority of trans and non-binary people in the UK.

My transition journey started in 2015, when I came out to family and friends as trans and non-binary at the age of 21. I finally felt able to put words to feelings of discomfort I’d had since childhood, and to embrace the masculine parts of myself I had long suppressed.

Things had become confusing for me when I hit puberty – suddenly I was expected to dress and behave in more feminine ways that felt utterly alien to me. My body was changing in ways I hated – it all felt like a terrible mistake. I was bullied severely at secondary school for my short hair, the way I walked, the clothes I wore, and eventually I just forced myself to conform.

Growing up in the 90s and 00s, there weren’t any positive trans role models or stories on television, so I had no concept of how one could be trans and live a happy, successful life.

As soon as I discovered what it meant to be transgender, I knew deep down that I needed to transition medically. I was scared, though, to interrogate those feelings too deeply for fear of how it would affect my friends and family, and how I was treated in society.

After a lot of soul-searching and armed with mountains of research, I worked up the courage to see my GP a few months after coming out. She told me that she did not know what the process was for being referred, but together we found a specialist at the local hospital.

My GP was kind and supportive, but I felt instantly uneasy about how little she knew. This would be an ongoing theme as I spent my twenties navigating a confusing and intimidating system. I frequently felt isolated and unsupported because the burden of accessing the care I needed was firmly on my shoulders.

The initial stages of the transition process felt more like a series of tests to prove my ‘transness’. I was asked questions by the first specialist I saw like what underwear I wore (something I thought was a joke when my friend warned me about it), and I got the sense that had I not said ‘boxers’ or something suitably masculine, it would have somehow counted against me – as if gender identity can be boiled down to something so arbitrary.

Thankfully, I passed the tests and was referred to Northampton Gender Clinic in October 2015. I was hoping to access top surgery (creating a more masculine chest) and hormone treatment. I had never been to Northampton and didn’t live anywhere near it, but I was told it had a waiting time of six months, compared to up to 18 months in other places.

I did not know that I would actually be waiting for nearly four years, and then have to make the long journey to Northampton for most of my eight appointments.

I’m not alone. The number of people currently on the waiting list for the Gender Identity Clinic (formerly known as Charing Cross Identity Clinic) is nearly 10,000, and last month they offered just 48 people first appointments.

The system in the UK is fundamentally unfit for purpose

Patients being seen for their first appointment now were referred in October 2017 – a four year wait just to be seen at the clinic. And in their own words, Charing Cross is not an ‘outlier’ – clinic wait times are in crisis nationally, which is hardly surprising given that there are only seven of them catering to adults in England.

According to their own website, ‘initial assessments are not currently being made’ for the 3,100 people on the waiting list at the Laurels NHS Clinic in Devon. A Freedom of Information request made in April this year revealed that only 12 patients who were new to this Gender Identity service have received a first phase appointment.

I was eventually seen by a psychologist for my first assessment at Northampton in June 2019. Most of the appointment was repeating the life-story I had told to the first specialist who saw me and discussing what kind of treatments I was hoping to access.

During this same appointment, I was also told that it would be at least another two years (one year following the scheduled appointments required by the Clinic, and at least another on a waiting list for a surgeon) before I could hope to have top surgery.

Having a large chest that I was binding every day just to be able to leave the house – causing back pain and breathlessness as well as preventing me from exercising comfortably – made the thought of this further wait unbearable.

I was extremely lucky that my parents were able to help me get top surgery privately in December 2019, but this option is not available to the majority of trans people. Many are being forced to find cheaper options abroad, travelling to Poland or Spain, but in most cases they have no choice but to wait it out.

Trans men waiting for phalloplasty (a complex, multi-stage procedure to create a penis, also known as Bottom Surgery) on the NHS are currently unable to access this surgery at all, due to the NHS contract with its only provider of the procedure lapsing in April this year, according to PinkNews. Consisting of multiple surgeries costing tens of thousands of pounds, going private is not a viable option.

Pilot schemes like the Indigo Gender Clinic in Manchester – which aim to provide trans healthcare that is timely, localised and patient-led – are proving that better models are possible.

But based on my experience, and the experiences of countless other trans people, the system in the UK is fundamentally unfit for purpose. It’s woefully under-staffed and under-funded and has no hope of keeping up with a demand that is rapidly increasing.

Due to the pressures and lack of resources, I felt that communication was extremely poor, and during the time that I was on the waiting list and in between appointments, I felt totally alone.

The current system relies on local GPs to be able to prescribe and monitor the treatments GICs recommend, and according to the 2021 Trans Lives Survey report, 45% of respondents said their GP did not have a good understanding of their needs.

In my experience, this creates a tense and often adversarial relationship between trans patients and GPs.

I have heard countless stories of trans people struggling to even have their correct name and gender listed on GP systems, of medical records being lost because a change of gender requires the issuing of a new NHS number, of injected hormones being administered incorrectly, and even of GPs refusing to sign shared care agreements or prescribe hormones recommended by GICs because of their own personal beliefs.

The NHS guidelines state that 18 weeks should be the maximum wait time for any non-urgent, consultant-led treatments from the day your appointment is booked through the NHS e-Referral Service, or when the hospital or service receives your referral letter.

Yet trans people are being ignored, and denied what should be a universal right to access timely and quality healthcare.

What we need is a process that is more localised, with less emphasis on gatekeeping based on personal opinions of GPs and gender identity specialists about what being trans means.

It’s only recently that the International Classification of Diseases stopped classifying transness as a ‘mental disorder’.

The entire system seems built on a disproportionate fear that patients will regret their decisions, when actually less than 1% of GIC patients have expressed transition-related regret or have de-transitioned, according to Stonewall.

While I understand that there needs to be some way of ensuring that treatments are in the best interests of patients, having to convince numerous people – in my case, none of whom are trans themselves – that you aren’t lying or making rash decisions feels extremely patronising, and emotionally exhausting.

GPs need training in how to care for trans people, and NHS administrative systems need updating to allow us to even exist bureaucratically.

Though my experiences of the doctors and nurses at the Gender Identity Clinic has been overwhelmingly positive in person, they are working under a system that cannot provide for the needs of its patients. I imagine this is equally as frustrating for them as it is for us.

It feels like these very real and serious issues are being lost behind rhetoric and media frenzies, and meanwhile the trans population of the UK is suffering.

At the moment, apart from routine blood tests and monitoring, my journey ends with testosterone.

Even just eight months in, the impact on my confidence and self-esteem has been immense. It feels like I’m going through the puberty I should have experienced the first-time round.

It’s not all pretty, but this time it doesn’t feel like a mistake. I’m growing into my body, no longer apart.

Trans people should not have to spend years of their lives waiting to feel this way – the mental health impact of being trapped on a seemingly endless waiting list should not be underestimated.

As a result of having top surgery privately and not wanting bottom surgery, my journey was much shorter than most – even though it took a total of five years and five months to access treatment on the NHS – but I still feel like my twenties were lost to a kind of NHS gender purgatory.

My heart goes out to the huge number of trans people still in limbo and I can only hope that raising awareness of the reality of our experiences will result in greater empathy and care.

We deserve so much better.