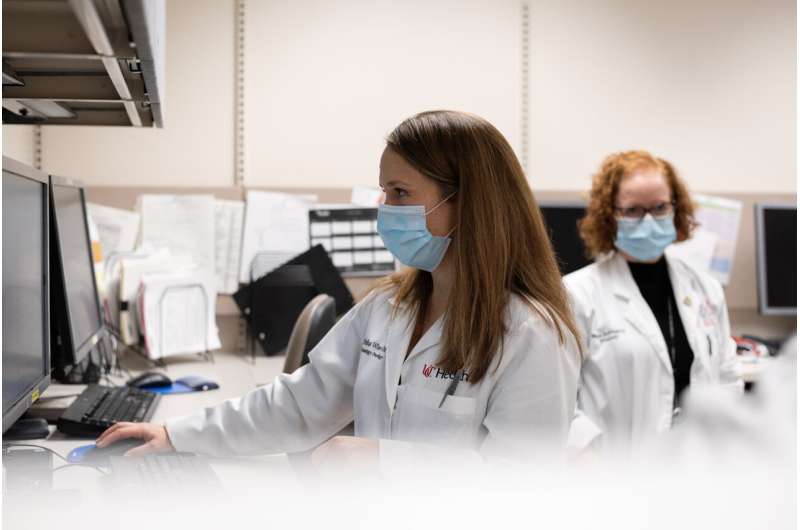 A University of Cincinnati clinical trial that added an immunotherapy drug to standard of care treatment regimens has shown increased survival rates for head and neck cancer patients with intermediate risk features.

Trisha Wise-Draper, MD, led the trial and was the lead author on a paper detailing its findings that was recently published in Clinical Cancer Research, a journal of the American Association for Cancer Research.

Wise-Draper said the trial focused on adding a drug, pembrolizumab, to patients’ typical standard care of treatments. Pembrolizumab, sold under the brand name Keytruda, is an antibody used in cancer immunotherapy that treats a variety of cancers, including head and neck. The drug targets a pair of receptors that usually work to turn off the human immune system when the immune system has finished a job of fighting off a foreign substance that causes sickness.

“Once the virus or infection is cleared, you have to have a way to turn your own immune system off, to tell it that the infection is gone and it’s time to calm down,” explained Wise-Draper, associate professor of medicine in the Division of Hematology/Oncology in UC’s College of Medicine, Head and Neck Center of Excellence co-leader, medical director of the University of Cincinnati Cancer Center Clinical Trials Office and Lab and a UC Health physician.

Tumor cells have learned to kick the receptors that shut the immune system system off into overdrive, which blocks immune cells from recognizing that tumor cells are foreign objects that the body should attack. Pembrolizumab, however, blocks the interaction and keeps immune cells working, which in turn leads to the immune cells attacking cancerous cells like they are supposed to.

The drug has been developed as a treatment for multiple cancers, and Wise-Draper said it has shown early success as a treatment for head and neck cancers that have spread or returned after initial treatment, with early studies reporting effectiveness for about 20% of patients treated.

“And although we’re careful to say cure, it does result in what is called ‘durable responses,'” she said, explaining that means patients have a good response to treatment much longer than expected, sometimes for years, “which was a huge advancement over chemotherapy where they may have only been effective for say nine to 10 months at most,” Wise-Draper said.

With the early data looking promising, the UC clinical trial was seeking to find if the drug would work as an initial treatment that would prevent the cancer from recurring. Patients with head and neck cancer—that are treated with the standard surgery, radiation and potentially chemotherapy if risk factors warrant it—typically see the cancers return about 30%-50% of the time, Wise-Draper said.

“So instead of waiting for them to come back, could we try to prevent them from coming back? If the cancer came back, they were much harder to cure the second time and had a lot of failure in that group,” she said. “So we asked if we could add this immunotherapy, the pembrolizumab, and decrease that risk of cancer coming back.”

Wise-Draper said the trial was also designed to examine why some patients respond to pembrolizumab while others do not. To accomplish this goal, tissue and blood samples were collected before and after administering the drug to analyze factors that contributed to patients responding to the treatment.

Patients enrolled in the trial were given one dose of the drug before surgery and were evaluated for risk status and grouped into intermediate- and high-risk groupings after surgery. A patient is considered high risk if part of the tumor is still left behind after surgery or is not contained in a lymph node.

All patients continued to receive the appropriate standard of care (radiation alone for intermediate risk or radiation and chemotherapy for high risk), with six more doses of pembrolizumab also administered after surgery.

Wise-Draper said the drug caused tumors to begin to die before surgery in nearly 50% of patients, a better rate than what was found when the drug was given for metastatic or recurrent head and neck cancer.

“We could see that a lot of these tumors were dying even after that first dose of pembrolizumab,” Wise-Draper said. “That was pretty exciting, because that was higher than we expected.”

“We had a huge improvement in that, so we saw that pembrolizumab was definitely increasing their chance of survival, at least compared to historical controls,” Wise-Draper said.

In the group of patients where the drug began to kill the tumor prior to surgery, 100% reported one-year disease-free survival.

“It was a really strong predictor of patients who are going to do well on this treatment,” Wise-Draper said. “Hopefully that is going to help us design trials to better understand who is going to respond and who is not.”

A reliable predictor for patients that will likely do well on the treatment will also help determine how treatments can be adjusted for patients who receive surgery, pembrolizumab, chemotherapy and radiation and do not respond well to the treatment.

“That’s really where the research is going now is trying to understand what are those biomarkers between the responders versus the nonresponders and how we can develop new and better targeted therapies,” Wise-Draper said. “We have a couple of identified markers that will help us going forward, but we’re still doing a lot of research in that area.”

Harvard University researchers have conducted a study similar to UC’s that showed similar success, and the successful findings of these trials show that a randomized Phase III clinical trial is worth pursuing. Pharmaceutical company Merck is in the process of conducting a randomized trial comparing patients who receive pembrolizumab in addition to their standard of care versus patients who receive the standard of care only.

“That will be a much larger study that will help show if pembrolizumab truly benefits these groups,” Wise-Draper said of the Merck study.

Research at UC into pembrolizumab as a head and neck cancer treatment is ongoing, with a next round of research being designed to learn how treatments can be more personalized to each patient. Tumor characteristics and biomarkers that can help predict whether a patient will respond to a certain treatment can be analyzed before surgery, with more specific treatment plans hopefully leading to better results.

“It’s been extremely exciting to see patients do well on this study and seeing their survival increase knowing what the historical rates were, as well as just being able to have a successful study in general is pretty exciting,” Wise-Draper said. “A lot of these developments I didn’t expect to happen so quickly in my career, so it’s really been an exciting process for all of us. Hopefully there’s more to come.”

If the drug continues to prove safe and effective, Wise-Draper said it will mark a “huge improvement” compared to the current standard of care that can still lead to a 50% recurrence rate. There is even a possibility that patients would not need their treatment plan to include surgery, she said.