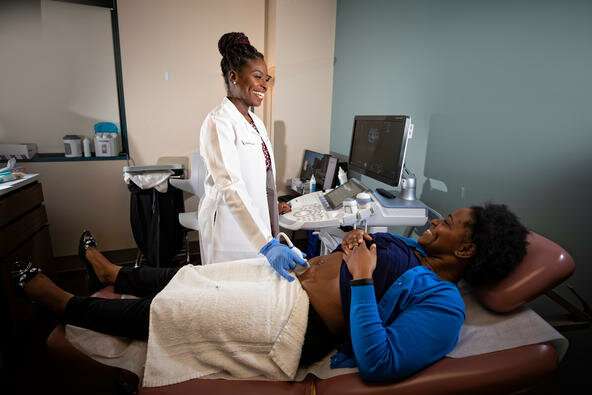 In June of 2018, tennis champion Serena Williams stunned the world by revealing the terrifying aftermath of giving birth to her daughter Olympia. With a history of blood clots, Williams was acutely aware of the post-delivery complications for which she was at risk. When she communicated those concerns to her doctor and the nursing staff, her concerns were dismissed. The next day, Williams nearly succumbed to a pulmonary embolism and other complications.

Serena Williams’ story is harrowing, but sadly, isn’t uncommon. Nationwide, black women are three times as likely to develop complications during pregnancy. Conditions such as gestational diabetes, hypertension, preterm birth and infant mortality affect black women disproportionately. Additionally, they are less likely to seek medical intervention, and when they do, like Serena Williams, their concerns are dismissed.

Dr. Quinetta Johnson, a fellow at UK HealthCare’s Maternal-Fetal Medicine, along with other patient care providers in obstetrics and gynecology, are working to ensure black women have improved outcomes in pregnancy and delivery. Citing the attention Serena Williams brought to the issues faced by black women, the doctors, nurses and staff are working to improve communication and understanding not just with their black patients, but among themselves.

“Before any impactful changes can be made, we must first understand the root causes at our institution,” said Johnson. “Maternal Fetal Medicine specialists have reached out to the state of Kentucky to form a Perinatal Quality Collaborative which will allow us to better understand our outcomes. The information gained from such an initiative will give us objective data on which to intervene. We desire lasting effective changes versus knee jerk reactions.”

According to a study by the Centers for Disease Control and Prevention, of the five major medical complications of pregnancy and childbirth, black women are two to three times more likely to die than white women with the same condition. Not having insurance or access to adequate facilities also plays a role in whether they seek treatment. Aside from a predisposition for pregnancy complications, a variety of social factors play a role how black women receive and react to healthcare.

“It has been hypothesized that health disparities among African-American women are due to a multi-tiered process,” said Johnson. “Studies showing that health care providers are less likely to prescribe black patients analgesics as compared to whites, indicating an implicit bias. Due to mistrust of the health care system, black women with concerning symptoms are often less likely to seek treatment, and when they do, they are less likely to receive appropriate intervention. And history is marred with examples of forced medical experimentation on racial and ethnic minorities, thus resulting in patient-level factors such as mistrust of the health care system and its providers. This mistrust can often lead to the detriment of the patient.”

For Johnson, an open and honest dialogue is the first step to addressing her patients’ needs.

“When speaking with all of my moms, I attempt to understand what barriers may affect their ability to be an effective partner in their care. With my black patients, I discuss the increase risk of medical co-morbidities such as preeclampsia and gestational diabetes. I have often had conversations with them regarding their distrust of the health care system and how that can adversely affect their overall health as well as their pregnancy outcomes. I try to be a sounding board for all of my patients and try to find effective solutions for their concerns while validating their experiences.”

Citing Serena Williams’ experience, Johnson realizes that some women are reluctant to voice their concerns. If no one listened to Serena Williams, they posit, why would anyone listen to them?

“I feel it is up to us as health care professionals to create an environment where African-American women do not feel like they have to be on the defense or worried about sharing their concerns,” said Johnson.

And while Johnson believes that institutional discrimination has improved over time, it still plays a role in health disparities. What happened to Serena Williams has motivated many of her patients to be more proactive about their health and to voice their concerns to their doctor.

Johnson and her colleagues recommend all women educate themselves as much as possible about pregnancy and the complications that can occur. Resources such as the website of the American College of Obstetricians and Gynecologists have a wealth of pregnancy information, as well as all areas of women’s’ health. Information about everything from breastfeeding to CPR are available in most obstetrician’s offices.