IVF clinics are ’embezzling’ £42million a year from couples who are desperate for children by charging for a needless add-on treatment, fertility expert warns

IVF clinics are ’embezzling’ millions of pounds from patients by selling needles add-on treatments, a leading expert has warned.

Professor Chris Barratt, of Dundee University, said around half of couples are being offered ICSI (intracytoplasmic sperm injection).

The treatment, which costs up to £1,400, is designed help men with poor sperm. But he said fertility problems strike only a third of men.

Health watchdogs say there is ‘no data’ to support its use in couples where the man’s fertility is normal. There are also concerns ISCI may cause birth defects.

The treatment, in which a single sperm is injected directly into the egg, may actually cut the chances of conceiving, studies have found. 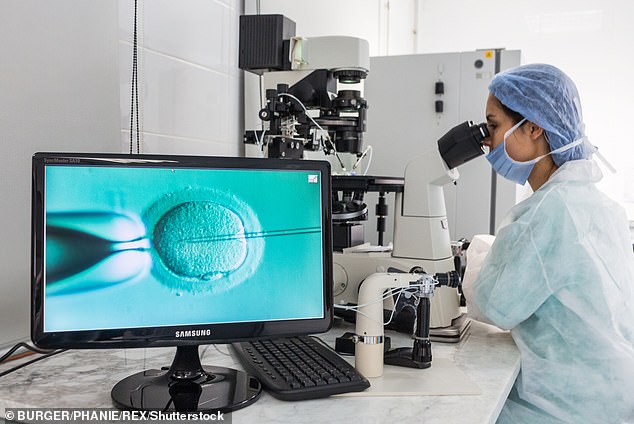 According to The Telegraph, Professor Barratt told a London fertility conference: ‘The question is why do you have a large number of people having ICSI who don’t have male-factor infertility.

‘Why is that happening? The only conclusion logically you can come to is that it’s financially driven. That might not be true but it’s the only logical conclusion.’

At a cost of £1,390 per patient, fertility doctors could make an extra £700,000 year by doing ICSI when they don’t need to, Professor Barratt said.

‘If you applied that to Europe, you’d be seeing €50 million (£42million) per year is effectively embezzled or whatever technical, financial term you want to call it.’

HOW COULD ICSI REDUCE A COUPLE’S CHANCE OF CONCEIVING?

ICSI is a treatment in which a single sperm is injected into the egg.

It was developed for use when the man has been diagnosed with infertility and there is a severe problem with his sperm.

It is a slightly more specialised form of IVF.

In standard IVF, eggs are taken from a woman’s ovaries and mixed in a dish with her partner’s semen sample usually containing about 150,000 sperm.

One or two of these fertilised eggs, or embryos, are then implanted back into the uterus.

In ICSI a single sperm is injected directly into each egg using a fine glass needle.

The process helps couples hit by male infertility problems – for example, if the male partner has a low sperm count or damaged sperm.

But only 30 to 40 per cent of couples’ problems are caused by severe male infertility, so scientists say no more than 40 per cent should have ICSI.

When given to couples where male infertility is not the problem, it simply reduces the number of healthy sperm available to fertilise the egg.

ICSI is used in about half of IVF treatments and the cost is added on top of a normal IVF cycle, which may cost more than £5,000.

The fertility watchdog, the Human Fertilisation and Embryology Authority (HFAE), says for half of couples having trouble conceiving, the cause is sperm-related.

However, Professor Barratt, head of the reproductive medicine group at the University of Dundee, claims just 30 to 35 per cent of men have fertility problems.

The UK’s health regulator, the National Institute for Health and Care Excellence (NICE), say ICSI should only be used when the male has a fertility issue.

HFEA advises: ‘For most people who have no evidence of male- factor infertility, the chances of getting pregnant are the same whether they have ICSI or not and it will cost more if you’re paying for your own treatment.’

Dr Jane Stewart, an IVF doctor and chairman of the British Fertility Society, said: ‘ICSI has a very specific indication for male-factor fertility problems and there is rarely a need to undertake it for any other reason.’

A study this year revealed ICSI is becoming more common among couples in which the man has normal sperm, but is less effective for them than IVF.

The researchers at the Royal Women’s Hospital in Melbourne and Melbourne IVF, a private fertility company, found the use of ICSI for men with normal sperm counts in all fertility treatments rose from 59.1 per cent in 2008 to 63 per cent in 2015 in Australia and New Zealand.

Similar trends were seen in the US and some countries, including Italy, the researchers said, have used it in up to 98 per cent of IVF treatments.

However, the pregnancy rate in healthy sperm couples using ICSI was 16.08 per cent, lower than the 23.06 per cent in those using routine IVF.