Ten years on from a cancer diagnosis, photographer and father-of-two Christian Gilles will run his 100th marathon at the Blackmores Sydney Running Festival on Sunday.

Gilles was just 28 years old when he was diagnosed with testicular cancer. He now uses his passion for marathon running to raise awareness of cancer survivors. 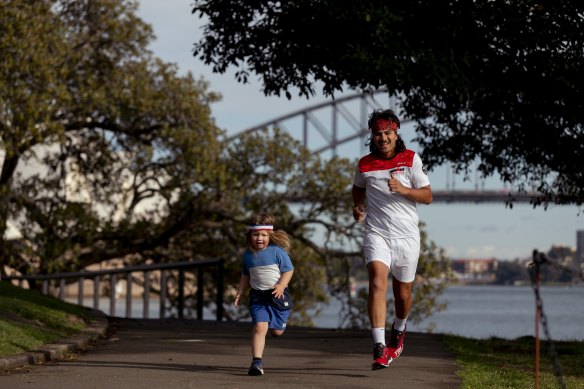 “At 28 years old, to be diagnosed with cancer is incredible – [at that age] you think you’re invincible,” he said.

“Life is short – I realised that when I’m faced with this disease – I want this to be an inspiration, even if it is one person.”

Gilles will be one of more than 28,000 people expected to compete in the event which includes five races: a half and full marathon, a wheelchair marathon, a 10-kilometre bridge run, and a family fun run.

The full course is 42.195 kilometres with the Sydney Marathon starting at 7am from Bradfield Park in Milsons Point. Participants cross the Harbour Bridge and run through the city before reaching the finish line at the Opera House forecourt.

Gilles says taking the more difficult path in life takes hard work but it pays off.

“You must have a goal and a schedule to attain that goal, believe in yourself and have confidence. Always look for excellence in yourself,” he said.

Police have reminded drivers of significant road closures and special event clearways in and around the Sydney CBD and eastern suburbs.

“The Sydney Harbour Bridge, as well as roads in Milsons Point, Sydney CBD, Darlinghurst and Pyrmont will start closing from 4am, while closures in Moore Park will be in place from 5.30am,” he said.

“Road users are reminded the Sydney Harbour Tunnel and Anzac Bridge will remain open during the event; however, you should allow extra travel time and expect delays.”

Motorists should also check signage before parking, as special event clearways will be in place between 1am and 1.30pm in the Sydney CBD, North Sydney, Pyrmont, Darlinghurst and Moore Park.