Man dies after under-cooked pork made parasites invade his BRAIN

How eating under-cooked pork can kill you by invading your BRAIN: Neural scans of ‘white spots’ reveal how teenager, 18, died when parasitic larvae built-up in his central nervous system and triggered deadly seizures

The 18-year-old, who has not been named but is known to be from India, was rushed to a hospital after he lost consciousness following a seizure.

An MRI brain scan revealed the patient had cysts throughout his brain, with the damage being consistent with the life-threatening condition neurocysticercosis.

Neurocysticercosis occurs when parasitic larvae found in under-cooked pork build-up in the body until they invade the central nervous system, triggering seizures.

Despite doctors’ best efforts to save him, the man died two weeks later. 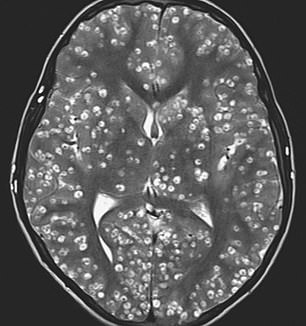 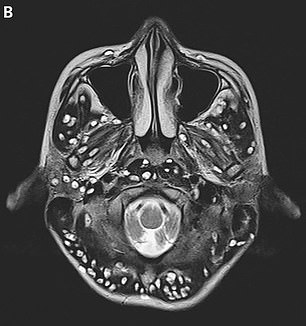 Results of an MRI scan revealed the man had numerous cysts in his cerebral cortex (pictured left as white dots). Lesions were also found in his brain stem and cerebellum (seen right)

The case report was written up in The New England Journal of Medicine by Dr Nishanth Dev, of ESIC Medical College, Faridabad, in the north Indian state of Haryana. Dr Dev treated the patient.

The man was rushed to ESIC Medical College after he endured tonic-clonic seizures.

These occur when an electrical discharge affects the entire brain and cause a patient to lose consciousness immediately.

If they continue for more than five minutes or in quick succession, the patient may require life-saving treatment.

Once at hospital, doctors noted the man seemed confused.

This is common of tonic-clonic seizures, with most patients feeling tired and disorientated for up to several days or even weeks after.

The man’s parents reported he had been complaining of pain in his groin for the past week.

A physical examination also revealed he had swelling in his right eye, as well as tenderness in his right testicle.

An MRI scan showed the patient had numerous cysts in his cerebral cortex – the outermost layer of the brain, which is responsible for thinking and processing information collected via our five senses.

Lesions were also in his brain stem, which is at the base of the vital organ, and sends messages between the brain and the rest of the body.

And cysts were found in his cerebellum – the area at the back of the brain that coordinates voluntary movements, like posture, speech and coordination.

Doctors noted the extent of the man’s brain damage was consistent with that of neurocysticercosis.

Neurocysticercosis occurs when the parasitic larvae Taenia solium invades bodily tissue from the intestine, and build ups in the central nervous system, muscles, skin and eyes.

Serum tests confirmed the man was infected with T. solium.

Doctors decided against treating him with antiparasitic drugs due to them typically worsening inflammation in those who have cysts in their brain.

These medications can also cause cerebral edema – excessive accumulation of water in the brain – and vision loss.

The man was therefore treated with the anti-inflammatory steroid dexamethasone, which is more commonly used to relieve conditions like allergies, arthritis and psoriasis.

He was also given anti-epilepsy drugs.

Sadly, however, it was not enough to save him.

Neurocysticercosis is a parasitic infestation caused by larval cysts of the pork tapeworm Taenia solium.

These cysts can enter the brain, leading to life-threatening seizures.

They may also swallow microscopic eggs passed in the faeces of a person with an intestinal tapeworm if they do not properly wash their hands after going to the toilet and contaminate surfaces or uncooked food.

The World Health Organization recognises neurocysticercosis as a leading cause of adult epilepsy worldwide.

Neurocysticercosis can be prevented through proper handwashing.

Treatment often involves medication to reduce swelling in the brain and kill tapeworms.