Millions of children are at risk of a deadly asthma attack

Millions of children may be at risk of a life-threatening asthma attack after research suggests nearly all young sufferers fail to use their inhaler correctly.

A study of 65 young asthmatics found an astonishing 97 per cent do not know how to properly use their inhaler.

Improper use of inhalers could be not breathing deeply enough, spraying it while breathing out, or exhaling too soon after using the medicine.

And the youngsters’ parents were generally oblivious as to how well their children could use the life-saving medicine, the study also found.

Researchers worry parents’ lack of knowledge around inhalers or their failure to supervise the medicine’s use may be to blame for the children’s poor technique.

Failure to use an inhaler properly means the full dose of the medicine cannot reach the lungs, with much of it staying in the mouth or throat. 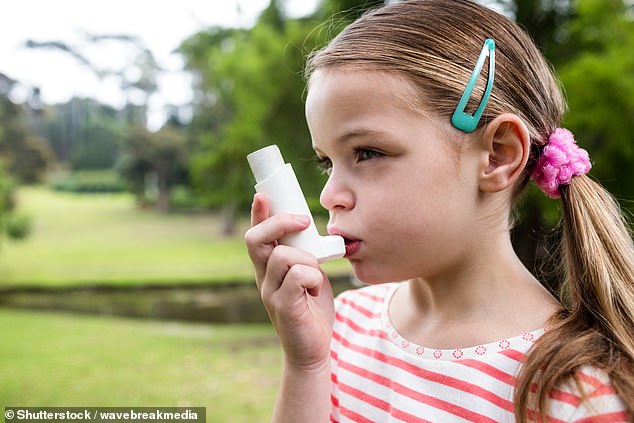 The research was carried out by the University of Chicago and led by Dr Anna Volerman, associate director of Med-Peds Education.

Asthma is the leading cause of chronic disease among children in the US, affecting one in 12 youngsters in 2015, according to the Asthma and Allergy Foundation of America.

And in the UK, one in 11 children has asthma, with a youngster being admitted to hospital following an attack every 20 minutes, Asthma UK statistics show.

The condition is often managed via steroid inhalers which reduce swelling in the airways to prevent an asthma attack.

If a patient experiences symptoms, a reliever inhaler can help to relax the muscles in their windpipe, making it easier to breathe.

To test how well asthmatic children use their inhalers, the researchers analysed 65 eight to 14-year-olds who attended four public schools in Chicago, as well as their parents. Most of the youngsters were male and 90 per cent were African American.

The children were asked to demonstrate how they use their inhaler, with 97 per cent doing it incorrectly.

HOW TO USE AN INHALER CORRECTLY

There are many different types of inhalers, with metered dose varieties being the most common.

To use one of these correctly:

Results – published in the Annals of Allergy, Asthma and Immunology – further revealed just one child ‘demonstrated mastery’ with their inhaler technique, the researchers wrote.

The parents were also asked how well their children use their inhalers.

Of those who said they were confident their youngster used it well, just four per cent were correct when the technique was assessed.

‘We know from past studies that both parents and children overestimate the ability of children to properly use their inhaler,’ Dr Volerman said.

‘We examined whether parent and child confidence were the same and whether either was a good sign of the child’s actual ability to use the inhaler correctly.

‘We found most parents and children overestimated the children’s ability based on high confidence by the child – despite inhaler misuse.’

On the back of the study, experts are urging parents of asthma sufferers to get their child’s inhaler technique properly checked over.

Dr Todd Mahr, an allergist and president of the American College of Allergy, Asthma and Immunology, added: ‘It’s not enough for an allergist or other health care provider to ask a child or their parents if the child knows how to use an inhaler.

‘Simply asking is not a reliable screening tool to determine who needs additional education on how to properly use an inhaler.