Moment a man had his infected toenail ripped off

Stomach-churning footage has captured the exact moment a man had his infected toenail ripped off.

The ‘very young gentleman’, who hasn’t been named, sought help from a podiatrist who calls herself ‘Miss Foot Fixer’.

Before tugging his nail completely off, Marion You at London’s Harley Street Foot and Nail Clinic jokingly said ‘see you later’. 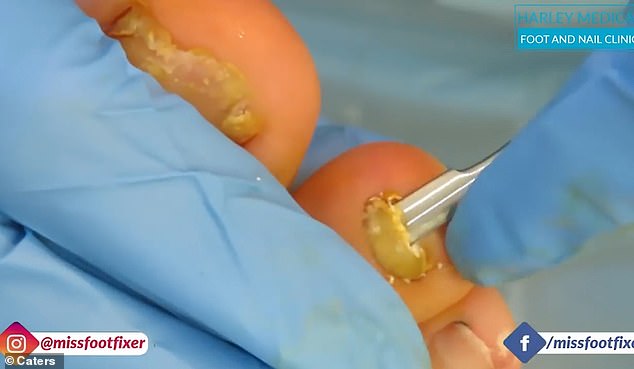 Before tugging his nail completely off, Marion You at London’s Harley Street Foot and Nail Clinic jokingly said ‘see you later’

In the four-and-a-half-minute video, she described the ‘total nail removal’ she was getting ready to perform as being ‘fantastic’

Miss Foot Fixer began the video by displaying the man’s right foot, explaining how he had a fungal nail that wasn’t clearing up.

In the four-and-a-half-minute video, she described the ‘total nail removal’ she was getting ready to perform as being ‘fantastic’.

The man was under local anaesthetic for the procedure, which is often the last-resort for those embarrassed by a fungal nail.

Miss Foot Fixer wiped a yellow dye over the grim nails. She then poked around with a sharp tool and scraped away material at the bottom of the nail.

And then she took another tool and dug around underneath the infected nail, in hope of trying to ‘pop it out’.

The grim video took another turn when Miss Foot Fixer picked up forceps to then pull the loose nail completely off.

Underneath the former nail was a bed of red, sore skin. The podiatrist then began cleaning away the bed of skin.

At the end of the procedure, Miss Foot Fixer turned to the patient and said: ‘Well, that was fun.’ He replied: ‘Is that it?’

Miss Foot Fixer has become a YouTube hit since she started uploading gruesome videos last year to her channel, which now has 25,000 subscribers.

‘Treatment can be tricky and often involves applying treatment directly to the nail.

‘Remember it takes up to a year for a new toe nail to fully grow – therefore if an infection is cleared with treatment it will be some time before the old nail is replaced with a healthy new one.’

WHAT IS A FUNGAL INFECTION OF THE NAIL?

Fungal infections of the nails are also known as dermatophytic onychomycosis, or tinea unguium.

The responsible fungus is usually the same as that that causes athlete’s foot – a common infection of the skin of the feet, especially between the toes.

In athlete’s foot the responsible fungus lives in the keratin that makes up the outer layer of the skin.

When the fungus spreads to the keratin of the nails, the result is a fungal nail infection.

At the start, there are usually no symptoms. Later the nails may become so thick that they hurt when they press on the inside of a shoe.

Fungal infections of the nail do not clear up by themselves, but not all of them need treatment.

If infected nails are embarrassing or uncomfortable then they are usually treated. The aim of the treatment is to get rid of the fungus.

Sometimes very thick nails that are not likely to respond to tablets alone may have to be removed by surgeons under a local anaesthetic.