Mother, 29, suffers a stroke just days after giving birth to her second daughter as she claims her husband’s quick reactions saved her life

A mother has told how she suffered a stroke aged just 29 which doctors fear was triggered by giving birth just two weeks before.

Lexy Walton-Godfrey, from Blidworth, Nottinghamshire, claims her stroke felt like a huge magnet was pulling her down.

Mrs Walton-Godfrey has now credited her husband, Chris, for saving her life, saying without his quick reactions she could have died. 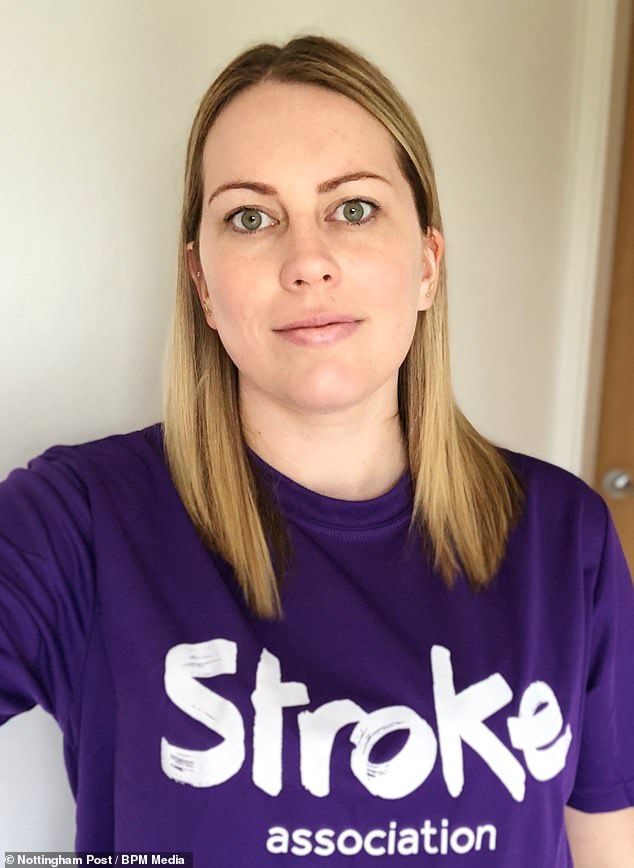 Mrs Walton-Godfrey, who is mother to six-year-old Mia and six-week-old Hollie, said the stroke came on like the ‘most intense feeling ever’.

She said: ‘It felt like a huge magnet was pulling me down to the floor and I had an excruciating pain in the right hand side of my head.

‘My husband noticed me and I was trying to shout “help me” but no words would come out.’

Mrs Walton-Godfrey gave birth to her second daughter, Hollie, in February through a C-section.

Just 17 days later, on March 2, after having a normal day with her family, Mrs Walton-Godfrey suffered her stroke.

She said: ‘After being rushed to hospital, doctors could only point to my C-section as a risk factor.’

Mrs Walton-Godfrey had an ischaemic stroke – the most common type of stroke, which happens when a blood clot blocks the flow of blood and oxygen to the brain. 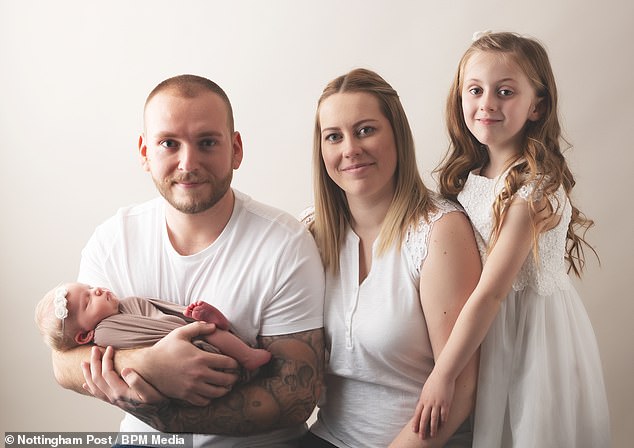 Mrs Walton-Godfrey, who is mother to six-year-old Mia and six-week-old Hollie, has credited her husband, Chris, (pictured) for his quick reactions, saying without him she could have died

A C-section can increase the risk of developing a blood clot inside a deep vein, especially in the legs or pelvic organs, according to the Mayo Clinic, although the likelihood of this happening is unclear.

One in every four pregnant women in the UK now has a caesarean birth, often when a natural birth is deemed too risky.

She said: ‘Having a stroke completely turned my life upside down.  Following my stroke I became quiet and reluctant to speak to people.

‘I was embarrassed because my speech was slurred and I couldn’t say certain words. Stroke fatigue has also been hard to deal with, especially with two young girls to care for too.

‘Following my stroke, I don’t feel angry, I feel calm and extremely grateful for everything I have.

‘My children are my motivation, I will keep fighting for them to see their mummy back to normal.’

A stroke is the fourth biggest killer in the UK, with more than 100,000 occurring every year.

Mrs Walton-Godfrey will take part in the Resolution Run in aid of the Stroke Association on Sunday May 5 at Markeaton Park in Derby.

She said: ‘I am proud to be running in the Resolution Run as a stroke survivor.

‘I feel lucky to be here and able to watch my daughters grow into beautiful strong women. I’m also lucky that I have a husband who has been my rock through all of this.

‘I wanted to raise money for the Stroke Association, who helped me through some dark times and to raise awareness among my peers and new mums.

‘If I can help just one person, I will be happy.’

Lucy Burnip, community and events fundraiser at the Stroke Association said: ‘In the UK there are around 100,000 strokes every year. Our latest research shows that by training and taking part in a Resolution Run, you are helping to lower your stroke risk.

‘The funds raised by each runner means we can reach out to more stroke survivors and their families to offer the support that they may need to rebuild their lives.’

This year the charity hopes to raise over £850,000 to continue supporting stroke survivors and their families throughout the UK.

WHAT IS A STROKE?

There are two kinds of stroke:

An ischemic stroke – which accounts for 80 percent of strokes – occurs when there is a blockage in a blood vessel that prevents blood from reaching part of the brain.

The more rare, a hemorrhagic stroke, occurs when a blood vessel bursts, flooding part of the brain with too much blood while depriving other areas of adequate blood supply.

It can be the result of an AVM, or arteriovenous malformation (an abnormal cluster of blood vessels), in the brain.

Thirty percent of subarachnoid hemorrhage sufferers die before reaching the hospital. A further 25 percent die within 24 hours. And 40 percent of survivors die within a week.

Age, high blood pressure, smoking, obesity, sedentary lifestyle, diabetes, atrial fibrillation, family history, and history of a previous stroke or TIA are all risk factors for having a stroke.

SYMPTOMS OF A STROKE

Of the roughly three out of four people who survive a stroke, many will have life-long disabilities.

Both are potentially fatal, and patients require surgery or a drug called tPA (tissue plasminogen activator) within three hours to save them.