Mother’s heartbreaking fight to get her son, nine, the drugs manufacturer won’t give him

Sebastien Hamilton loves the park near his home in South London, where his mum Severine takes him every day after school.

But there are moments — when he hesitates at the foot of the climbing frame, or can’t find a familiar word — when she wonders: is this the beginning of the end?

For Sebastien, nine, has a progressive genetic disorder called mucopolysaccharidosis type IIIB, or Sanfilippo syndrome, a devastatingly cruel condition that first strips children of language, then mobility and finally the ability to swallow and breathe.

There is no treatment or cure — most children with Sanfilippo syndrome do not survive beyond their teens.

‘There have been terrifying moments over the past couple of years where we thought we were losing him,’ says Severine.

‘Every time he climbs into a car, gets out of the bath, climbs the slide, runs and walks down the street and up the stairs, I am relieved and grateful, because I have seen other children his age with Sanfilippo syndrome lose each one of those skills.’

But there is hope. And hope is like rocket fuel for parents like Severine and her partner Kole (both work in the film industry — although Severine is now focusing on being a full-time mother). 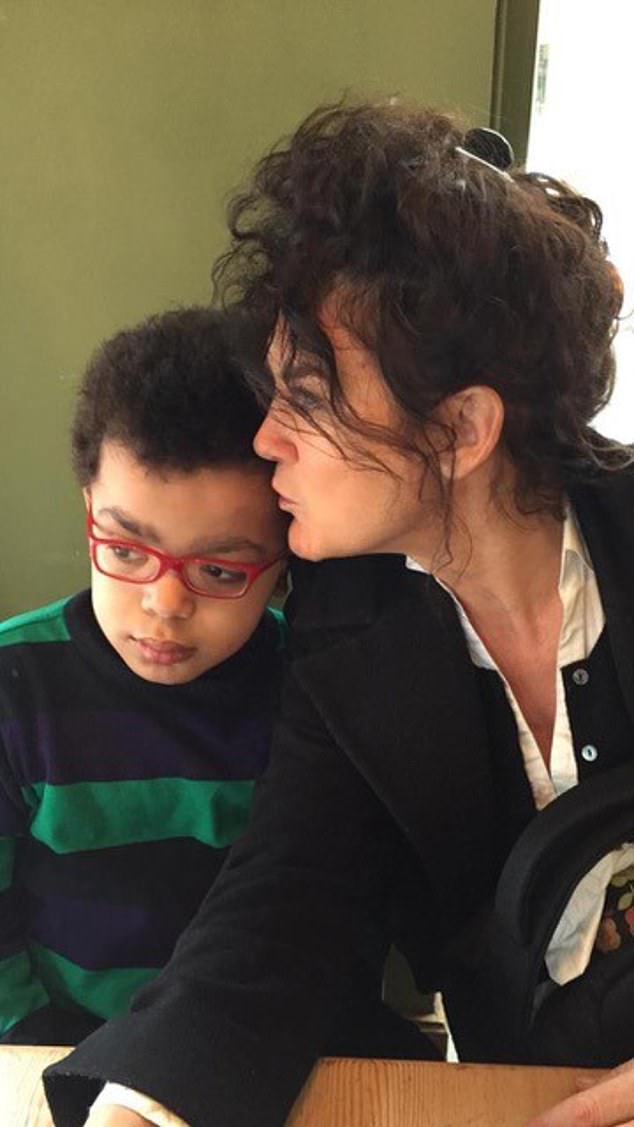 Sebastien Hamilton loves the park near his home in South London, where his mum Severine takes him every day after school. But there are moments — when he hesitates at the foot of the climbing frame, or can’t find a familiar word — when she wonders: is this the beginning of the end?

Sebastien’s future, and those of thousands of others, rests on the outcome of crucial clinical trials, where pharmaceutical companies test drugs on groups of patients, looking for a breakthrough.

Mucopolysaccharidoses (MPS) are a group of rare, inherited disorders where the body stores large chemical molecules in organs, instead of clearing them away.

Patients with Sanfilippo syndrome lack the enzyme that breaks down and recycles a sugar molecule called heparan sulfate, which is used in the building of bones, cartilage, skin and other tissues. In their case it builds up in the cells, causing progressive damage.

Sanfilippo syndrome occurs when both parents are carriers of the affected gene; they have no symptoms themselves and there is often no family history.

Patients usually appear healthy until the age of two, when developmental delay — slowness to walk and talk — becomes obvious.

Other symptoms include chronic diarrhoea, sleeplessness, hyperactivity and behavioural problems.

Decline is usually rapid. Often by the time they are eight or nine they are fed through a tube and are wheelchair-dependent. The condition is often known as childhood dementia.

When he was two-and-a-half, Sebastien, a patient at Great Ormond Street Hospital, was enrolled in the trial of an enzyme replacement therapy drug.

‘We saw incredible results,’ says Severine. ‘Sebastien used to wake every hour during the night. Suddenly he was sleeping through. And the diarrhoea disappeared.’

But the trial was stopped abruptly in 2017, when Sebastien was four, because the U.S. manufacturer, BioMarin, decided to stop investing in the drug as the market for it is small — a decision Severine describes as ‘utterly heartbreaking and frustrating’.

Although Sanfilippo syndrome is rare (affecting around 150 children in the UK), it’s estimated that around 3.5 million will be affected by a rare disease.

This is a significant number of patients for whom there may be no targeted treatment.

Eurordis, a group that represents 1,000 rare disease patient organisations in 74 countries, says it is not uncommon for trials to be stopped without warning.

‘Genetic disorders generally receive little attention from big pharmaceutical companies because the numbers involved are too small to expect a return on their investment,’ says Yann Le Cam, CEO of Eurordis. ‘But each person counts — we should leave no one behind.’

Yet as that enzyme replacement therapy trial was ending, another was just beginning. In 2016, 20 children, including two patients at Great Ormond Street Hospital, were recruited to receive a promising new drug, tralesinidase alfa.

But Sebastien had been excluded from taking part because the eligibility criteria eliminated anyone who had previously been treated with enzyme replacement therapy (ERT).

Sebastien’s doctors say there is little scientific basis for this clause — known as washout time — as the time it takes for an ERT drug to leave the body is just two weeks.

Allievex, the small U.S. company running this trial, says the results have been spectacular, with evidence that the drug eliminates the build-up of heparan sulfate, reduces enlarged livers (one of the main symptoms) and stops the brain shrinking. It can even reverse some of the damage that has already occurred. Allievex reports on its website: ‘These results suggest tralesinidase alfa holds promise to become a first-in-class and best-in-class treatment for Sanfilippo syndrome type B.’ (This is the type Sebastien has: just 27 babies were born with it in the UK between 2000 and 2020.)

For five years, Severine has campaigned for Sebastien to be allowed the treatment before it is too late. He is still beating the odds: aged nine, most children with his disorder are in a wheelchair, but time is running out.

His doctor, Spyros Batzios, a consultant in paediatric metabolic medicine at Great Ormond Street Hospital and a principal investigator for the Allievex trial in the UK, has written and spoken to the firm’s CEO, Tom Mathers, begging for Sebastien to be included.

In May, Great Ormond Street Hospital wrote to Allievex to advocate on Sebastien’s behalf — it needs the company’s permission to provide the medication.

Severine shows me sheaves of personal letters to Tom Mathers. He has told Severine that there’s not enough of the drug available for another child, but that his company will expand access for all children with Sanfilippo syndrome in the future.

Severine says: ‘Sebastien is reaching the plateau period of the condition, where rapid degeneration takes place. It’s always been urgent. Now it is vital.’

Yann Le Cam, who is advocating on the family’s behalf, says: ‘A case like this sends the wrong message collectively. If children can’t take part in one trial because they have been involved in another, parents will decide to wait, to not join clinical trials, because their interests are not being defended. So there’s a wrong-doing — which is dramatic for Sebastien now. But it is also catastrophic for clinical trials generally.’

Sebastien was diagnosed with Sanfilippo syndrome after a routine dermatology appointment when he was one year old.

‘Sebastien had some patches of discoloured skin which turned out to be a fungal infection and cleared up quickly,’ says Severine.

But the doctor also noticed that Sebastien’s head was slightly large for his age, and he was sent for blood tests.

Weeks later, Severine was sitting in a hospital room with Sebastien on her lap while a consultant explained the implications of Sanfilippo syndrome.

The news hit Severine like a punch in the stomach. ‘But I couldn’t allow myself to collapse,’ she says. ‘I went straight into battle mode, finding out everything I could and working out what we can do to keep him healthy.’

The Medicines And Healthcare products Regulatory Agency (MHRA), which licenses drugs in the UK, has provided Allievex with information to help it take advantage of the Early Access to Medicines Scheme as a quick way to give Sebastien access to tralesinidase alfa — under the scheme patients with rare diseases can be given experimental drugs.

The MHRA has also suggested allowing Sebastien’s doctor to prescribe it as an unlicensed drug. However, it cannot force drug companies to do this, and Allievex has consistently declined to provide the drug for Sebastien.

‘Allievex has evidence gathered over five years on safety and efficacy — it knows the drug is safe and it works,’ says Yann Le Cam.

Despite their battle, Severine and Kole enjoy every day with their son. ‘Sebastien is the smiliest child,’ says Severine. ‘He’s sociable and happy, he loves music and dancing and horse riding — he enjoys everything in his life and everyone he meets.’

But they are living with a slow grief, where every day brings losses. Although he maintained a good vocabulary until the age of seven, familiar words now come and go.

It can take hours to get him off to sleep. However, Severine is quick to point out the huge rewards.

‘Every day when Sebastien opens his eyes I feel such love and gratitude at his smile — that’s what keeps me going,’ she says.

On Christmas Eve 2021, she launched a petition which has been signed by more than 7,000 people — including footballer Marcus Rashford and singer Emmanuel Kelly, who have both

Severine says she’s had no reply from Allievex for a year. Then, last week, after being contacted by Good Health, Mr Mathers responded to an email she sent in August 2021.

Allievex met with the U.S. regulator, the Food and Drug Administration (FDA) yesterday in the hope of gaining fast-track approval for the drug.

In an email to Good Health, Mr Mathers said the company’s ‘laser focus’ is on ‘securing regulatory agreement in place with FDA and EMA [the European Medicines Agency] for further development of tralesinidase alfa.

‘We are using every ounce of drug product to support our ongoing clinical study and are at risk of running out.

‘If we are unable to gain regulatory agreement with FDA or EMA, the company will most likely be unable to secure necessary financing to continue the program.’

Severine, meanwhile, can only hope Sebastien’s life will be saved.

‘If I don’t try everything to help my son I’d never forgive myself,’ she says. ‘I wake up every day ready for battle.’