A 26-year-old was found dead at his campsite during the Bonnaroo Music and Arts Festival in 2019. The toxicology report linked his death to a grim trend that has only worsened since. In his system were both ecstasy and fentanyl — a dangerous combination, especially if people don’t know the party drug contains the highly potent synthetic opioid.

Attendees of multiday concert festivals like Bonnaroo, held on an isolated farm in Coffee County, Tennessee, don’t seem to have much trouble sneaking pills and powders past security. And those drugs can be laced with fentanyl, which is why medics who work at these events carry the overdose reversal medication naloxone these days. But first responders can’t be everywhere, and the fast-acting drug needs to be administered quickly.

“We are showing up with it in huge quantities,” said Ingela Travers-Hayward, whose Ohio-based nonprofit This Must Be the Place is flooding festivals with Kloxxado, a nasal spray version of the lifesaving medicine. “We want to move around the campground and proactively hand this out.”

Travers-Hayward and her husband, William Perry, who became a rehabilitation counselor after addiction sent him to prison for a decade, are crisscrossing the country this summer distributing doses of Kloxxado that have been donated by the manufacturer, Hikma Pharmaceuticals. Their summer tour wraps up at Burning Man in the Black Rock Desert of Nevada on Labor Day weekend.

Music festivals once frowned upon naloxone, and some banned it. But even though what’s known as harm reduction — the concept of minimizing the negative effects of illicit drug use without trying to stop it altogether — has gained acceptance, it’s far from embraced. Less accepted than naloxone among concert promoters is helping people test their drugs for fentanyl. Companies don’t want to be seen as condoning drug use. They’re also navigating a legal gray area and battling public perceptions.

Harm reduction advocates picketed outside Bonnaroo in 2019 because the festival did not allow testing of recreational drugs to look for fentanyl. Live Nation, which is the majority owner of Bonnaroo and among the largest concert promoters in the world, didn’t respond directly to questions about whether it now allows fentanyl testing, saying in an email that Bonnaroo is always looking for ways “to take care of and educate our patrons.”

Overdose deaths continue to climb in the U.S. Drug fatalities topped 100,000 nationwide in 2021, with two-thirds caused by synthetic opioids. This has prompted federal and state governments to try to think of new ways to combat the crisis, with the Biden administration giving $30 million to support programs that have often operated in the shadows. In the past few years, the Substance Abuse and Mental Health Services Administration also has fully embraced fentanyl test kits.

“The lethality of fentanyl has so changed the game, because it only takes a little bit to have someone stop breathing,” Olsen said. “If we have these very effective tools that we know can save people’s lives, I think that’s what we can rally around.” 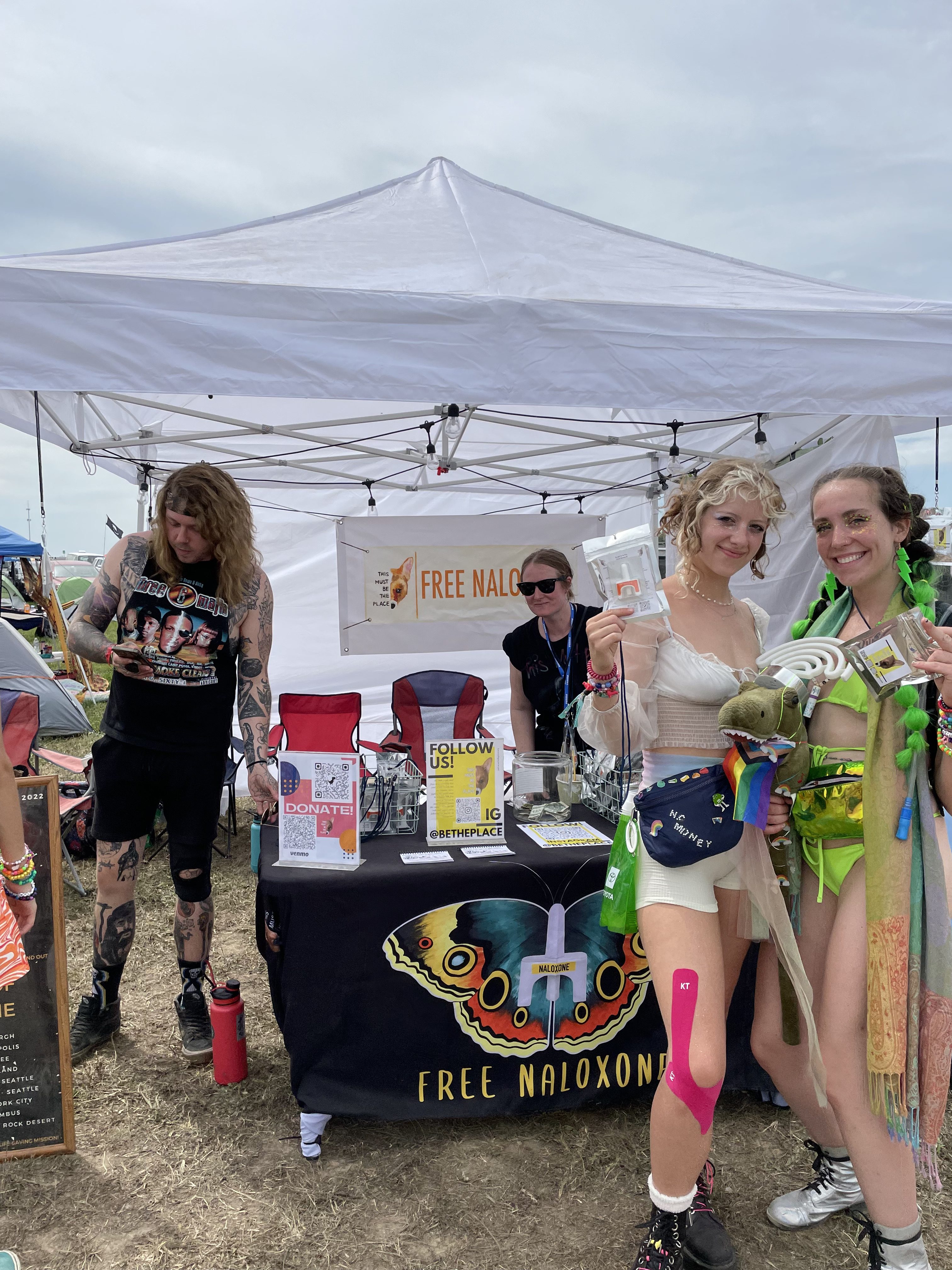 Public health agencies increasingly recommend that even people who don’t use drugs carry naloxone, which can be obtained through a prescription or over the counter, though laws vary in different states. But often the government takes a back seat in carrying out harm-reduction efforts, relying instead on nonprofits and volunteers.

“It’s a fine line to walk, and health departments try to stay within the bounds of the law while also communicating actively, trying to get good public health education out there,” said Lori Tremmel Freeman, CEO of the National Association of County and City Health Officials.

But very few people bring reversal medication with them to concert venues, Perry said, and tracking down free doses can be difficult. “It’s not something somebody puts on their to-do list.”

For those willing to buy it, even the generic forms can be expensive. And name-brand reversal kits cost more than $100 each without insurance.

“What we’re learning is that all of these people know what naloxone is — they’ve even known people who have come back to life because of naloxone,” Travers-Hayward said. “But we are able to be the people who give them their actual first kit.”

She and a team of volunteers handed out 2,500 doses at this year’s Bonnaroo. One death occurred at the four-day event in June, although the toxicology report that would indicate whether an overdose was to blame has not been released.

Laws and policies about handing out such drug-safety tools vary by state. Naloxone, for instance, technically remains a prescription drug, so handing it out means relying on good Samaritan laws that shield organizations and people from legal liability.

Although more states, including Tennessee, are decriminalizing fentanyl test strips, they remain classified as illegal drug paraphernalia by some states. And even in states where test strips are legal, big-time festivals still don’t welcome them publicly, because of concerns about liability or image.

“They have in the past given us a long list of insurance requirements,” said the founder of Bunk Police, a company that surreptitiously sells test kits at festivals. “We have scoured the planet, I kid you not, for underwriters that will insure us in this circumstance.”

The founder, who goes by Adam Auctor, doesn’t share his real name — he fears for his safety because he traces laced drugs to specific dealers and tries to persuade them to destroy their supply. He has testimonial videos that show dealers in tears after realizing their drugs could have killed someone. But others are not so thankful, he said.

Auctor said he has been kicked out of Bonnaroo twice and no longer goes. But he sneaks into various other festivals a few days early, parking his truck — filled with thousands of test kits — in the woods to evade security until he can blend into the throngs. “We barely even ask for permission to come anymore,” he said. “We know they will say ‘no’ to us.”

But the need is great, he said.

“Drug checking is not an option anymore,” said Mitchell Gomez, executive director of DanceSafe, a nonprofit that offers drug checking and other public health education at nightclubs and party venues. “It’s a thing that anyone who uses substances has to do.” 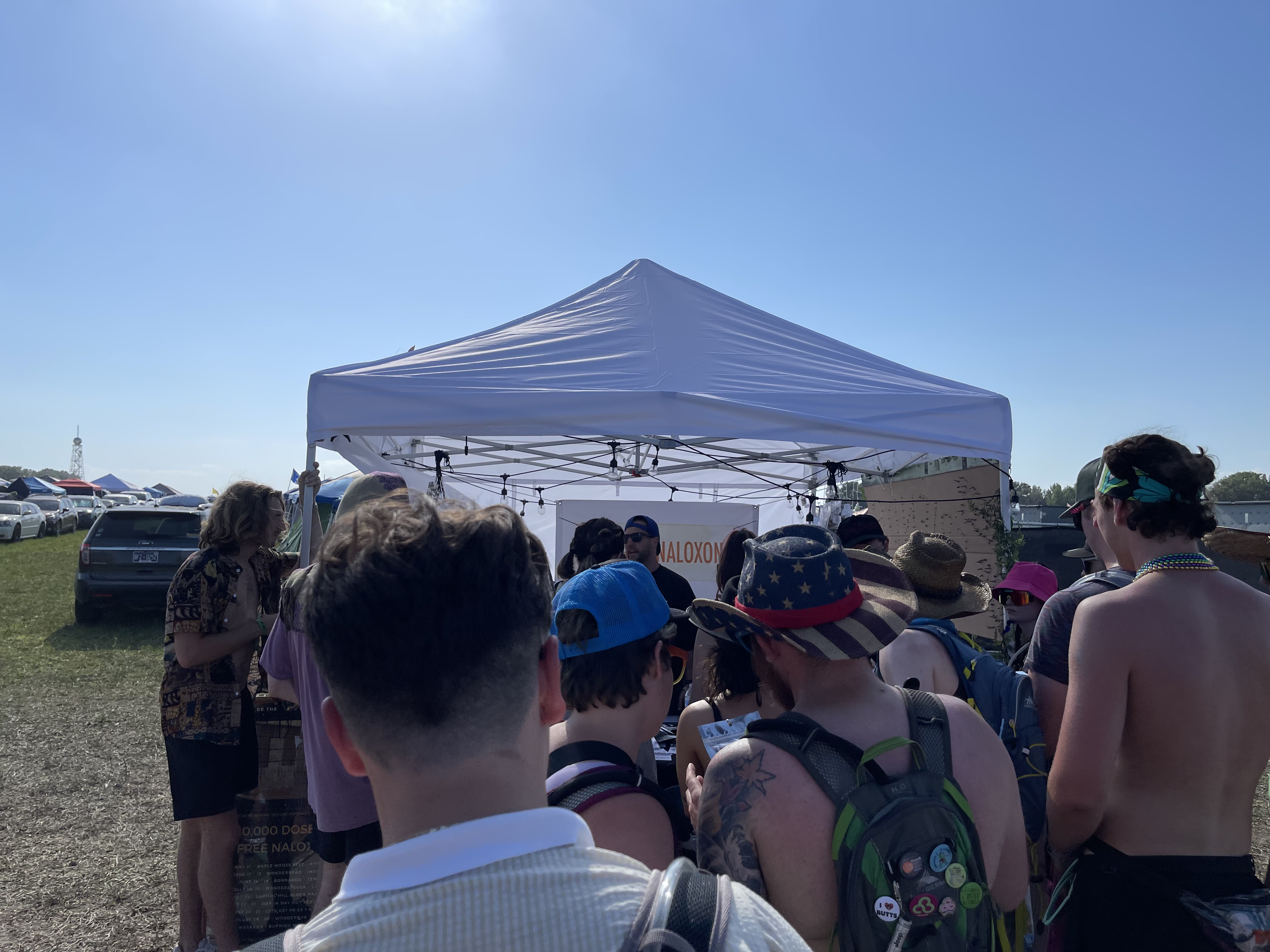 DanceSafe follows rules set by promoters, although Gomez would not reveal which festivals are cooperative. Where allowed, the nonprofit sets up a tent with a tabletop machine that screens drugs for fentanyl.

Overdoses — often from substances laced with fentanyl — are now the top cause of death for Americans ages 18 to 45. The grim trend line has softened some promoters, Gomez said, but not all of them.

Although corporate legal teams remain leery, Gomez said, he sees potential liability working in both directions. “If somebody dies at your event from something DanceSafe could have prevented and we reached out to you about being on-site and you turned us down, I actually think that probably created some liability as well,” he said.

Sometimes he’s welcomed at a festival but banned from checking drugs. So Gomez hands out information about the dangers of fentanyl and gives away earplugs — a less controversial way to help people stay safe at festivals.

This article is from a partnership that includes Nashville Public Radio and KHN.