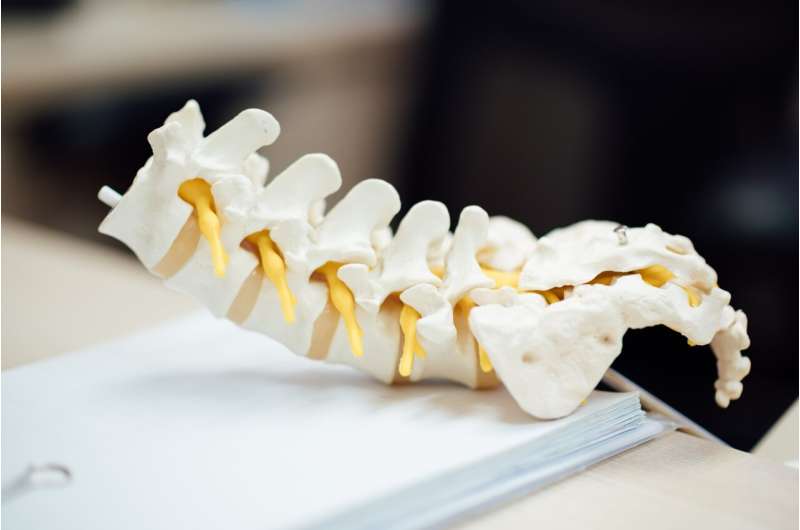 New research presented this week at ACR Convergence, the American College of Rheumatology’s annual meeting, found that an innovative new artificial neural network can detect radiographic sacroiliitis in patients with suspected axial spondyloarthritis, a progressive disease that is more common in young adults.

Spondyloarthritis is a subtype of arthritis that can involve the spine, and sometimes, the joints of the arms and legs, as well as the skin, intestines or eyes. Many people with axial spondyloarthritis (axial SpA) progress to having a degree of spinal fusion, specifically in the case of ankylosing spondylitis.

To avoid incorrect diagnosis of axial SpA, structural changes in the sacroiliac joints (so-called radiographic sacroiliitis) must be confirmed by X-ray with high specificity. Some patients’ radiographs do not yet show joint changes advanced enough to be radiographic axial SpA, although they may develop these changes years later. If an X-ray is negative but axial SpA is still suspected, magnetic resonance imaging (MRI) of sacroiliac joints is usually the next step.

This study tested a newly developed deep convolutional neural network (CNN), which was shown to detect radiographic sacroiliitis with expert accuracy in axial SpA patients. The goal of this new study was to evaluate how accurately CNN detects this condition in a typical diagnostic setting.

“In axial SpA, we still experience a large diagnostic delay of several years. But incorrect diagnosis of axial SpA in a person without inflammatory disease is a serious situation, which might be associated with the use of a wrong treatment approach causing unnecessary risks and costs,” says Denis Poddubnyy, MD, Head of Rheumatology, Charite Medical University Berlin, and the study’s lead author. “That’s why shortening the diagnostic delay should go hand in hand with actions to make a precise diagnosis. The latter includes educational activities for rheumatologists, radiologists and other specialists dealing with back pain patients, as well as development supportive diagnostic tools.”

Researchers evaluated sacroiliac radiographs of 361 patients with chronic back pain and suspected axial SpA who saw a rheumatologist for a diagnostic workup. The radiographs were evaluated using the modified New York criteria. Each patient was diagnosed with either axial SpA or not, by consensus of both the rheumatologist and a radiologist, based on the patient showing definite radiographic sacroiliitis. The doctors’ consensus judgment was the reference for comparison to the CNN’s evaluation. Of the 361 patients in the study, pelvic images of 110 patients diagnosed with axial SpA, including 61 with radiographic and 49 with non-radiographic axial SpA, and 230 with no axial SpA, were evaluated by the CNN. These evaluations were compared to the traditional radiograph evaluation made by the doctors.