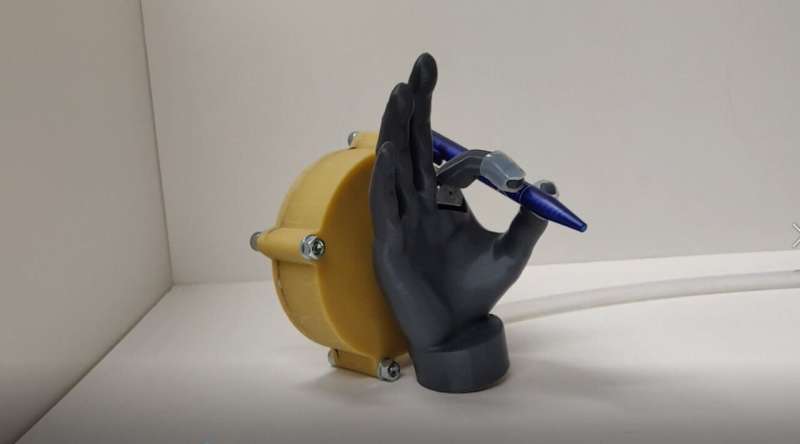 A revolutionary new hand prosthesis powered and controlled by the user’s breathing has been developed by researchers at the University of Oxford.

The simple lightweight device offers an alternative to Bowden cable-driven body-powered prosthetics initially developed in the early 19th century—particularly for those too young or anatomically unsuited to an uncomfortable harness and cable system.

Senior author Professor Jeroen Bergmann, Department of Engineering Science, University of Oxford said: “Our breathing-powered device provides a novel prosthetic option that can be used without limiting any of the user’s body movements. It is one of the ﬁrst truly new design approaches for power and control of a body-powered prosthetic since the emergence of the cable-driven system over two centuries ago.”

Although several different prosthetic options exist (suitability dependent on the level of upper limb difference amongst other factors) little progress has been made in developing new approaches to power and control of body-powered devices compared to sophisticated externally powered prosthetics.

The most widely used functional upper-limb prosthesis remains the cable-driven body-powered system—which can be prohibitively expensive to own and maintain in low-resource settings because of the costs associated with the necessary professional fitting and maintenance.

The new approach, published in the journal Prosthesis, provides an alternative body-powered device for users in situations where cost, maintenance, comfort and ease of use are primary considerations.

By regulating their breathing, users power a small purpose-built Tesla turbine that can accurately control the prosthetic finger movements. The volume of air needed to power the unit can be achieved by young children and the gearing in the unit determines the speed of the grasping action. 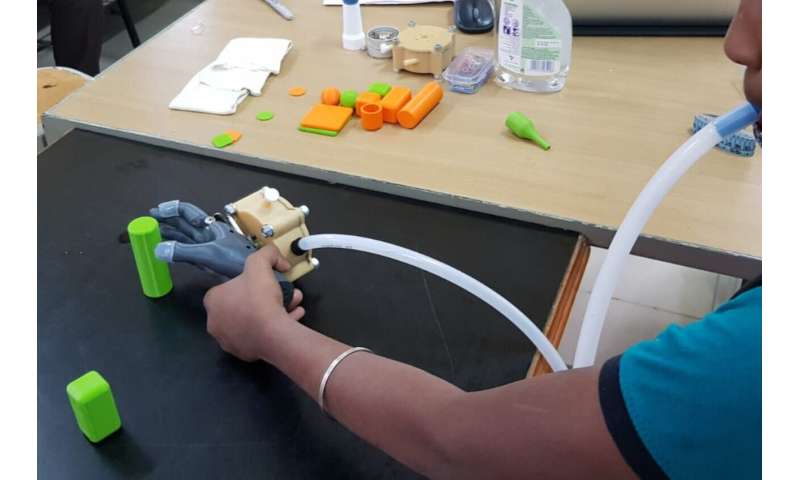 Cable and harness free, the device is lightweight and suitable for children and adolescents who are still growing. Minimal maintenance and training are needed for ease of use in comparison to other prosthetic options.

The researchers have been working with LimbBo, a leading U.K.-based charity for children with limb differences, to develop and refine the device.

Jane Hewitt, Trustee of LimbBo, said: “One of our aims at The LimbBo Foundation is to ensure that all our children have access to any devices which will aid their day-to-day lives. No two limb differences are the same and what will help one child will not be suitable for another. Currently, there is some choice available regarding prosthetics but there are still children who need a completely different approach. For many, their lack of an elbow joint severely limits their access to prosthetic devices and so we welcomed the chance to be involved with Professor Jeroen Bergmann to look at different approaches. This is an exciting development for many of our children.”

She added: “We welcome this research as a completely different approach to enabling our children to have the help that a prosthetic such as this would give them. The element of choice is important, and we would fully support any research and development plans that enable this. We feel that by including us in discussions the team in Oxford really do want the best for our children.”

A spokesperson from Mobility India, an NGO based in Bengaluru, India working with the researchers on user testing said: “The breathing-powered prosthetic (Airbender) has the potential to broaden prosthetic options for children and adolescents, especially in India and other developing countries that lack appropriate technology.”

First author Dr. Vikranth H. Nagaraja, Department of Engineering Science, University of Oxford said: “Over 40 million individuals worldwide are estimated to have limb differences—most with no access to any form of prosthetic care. Besides, upper-limb prosthetics currently available to patients are often neither affordable nor appropriate, especially in low-resource settings. We hope our research represents a step-change in making prosthetics more widely accessible and helping overcome challenges with current options.”