New methodology for cerebrovascular dysregulation in patients with glioma 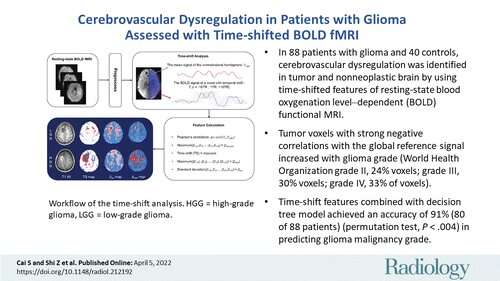 Glioma is the most frequently identified intracranial tumor in adults. Mapping the cerebrovascular network remodeling at the macroscopic level may provide an alternative approach to assessing hemodynamic dysregulation in patients with glioma.

Recently, a research team from the Shenzhen Institute of Advanced Technology (SIAT) of the Chinese Academy of Sciences suggested that the functional disruption of the cerebrovascular system could be more significant in the disease characterization of glioma.

Their study was published in Radiology on April 5.

Based on an approach of time-shifted functional MRI (fMRI), the researchers identified grade-specific cerebrovascular dysregulation in the tumor as well as the uninvolved brain tissue of the patients. Compared with the vascular activity of healthy brains, the tumor vasculature features more prominent temporal asynchrony, in contrast to the excessive vascular synchronization in the contra-lesional hemisphere.

“It is particularly noteworthy that the vascular setup in the tumor seems to have developed an automaticity counteracting the systemic vascular synchronization, especially in gliomas with higher malignant grades,” said Prof. Zhang Lijuan, the corresponding author of this study.

These findings indicated that the growth of glioma triggers functional remodeling of the vascular system in the entire brain. The clinical and biological effects of focal glioma may need to be interpreted in the context of global changes in vascular network.

Disturbance in the vascular function may substrate the pathophysiological mechanism of tumor progress and the functional plasticity of brain networks. The cerebrovascular dysregulation is very much relevant to the aggressiveness of the tumor, and thereby may serve as a new marker of glioma pathology.