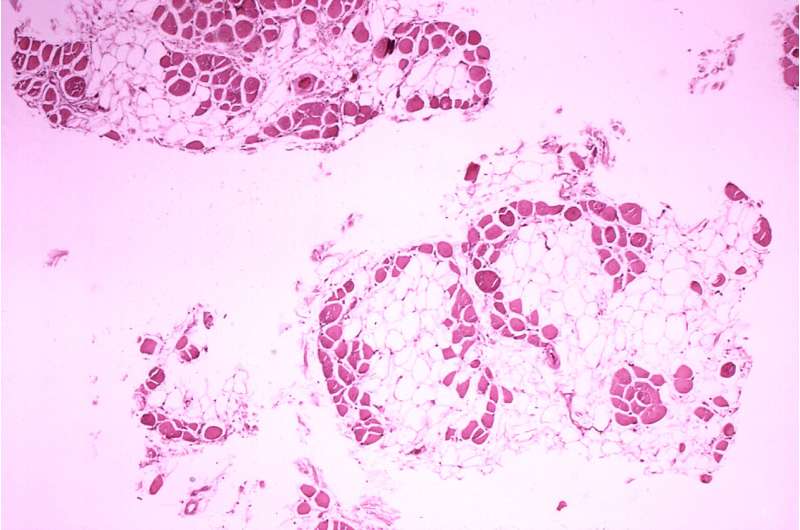 A research team led by Nicolas Dumont, a researcher at CHU Sainte-Justine and professor at the Université de Montréal, has discovered a new therapeutic molecule, Resolvin-D2. It has the potential to significantly improve the quality of life of patients with Duchenne muscular dystrophy (DMD) by stimulating muscle stem-cell activity.

DMD is a rare genetic disease characterized by progressive muscle degeneration, affecting one in 4,000 boys. The first symptoms appear between ages 3 and 5, and as the child grows, there is an irreversible loss of muscle function. Currently, the administration of glucocorticoids from early childhood is the standard patient treatment.

The results of this study were reported today in the journal Nature Communications.

“Glucocorticoids have powerful anti-inflammatory effects that are widely used in clinical practice—to date, they are the only treatment that can effectively slow the progression of the disease,” said Dumont, an associate professor in UdeM’s School of Rehabilitation.

However, when this molecule is taken regularly, its relative toxicity can cause significant side effects, such as osteoporosis, growth retardation in children or acute anxiety. In addition, glucocorticoids can directly attack the muscles and decrease their ability to heal. Thus, the beneficial effect on patients’ muscle function is undermined by harmful side effects.

“Our initial goal was to target a molecule that would be more effective than the current treatment and less toxic,” said Junio Dort, first author of the study and a postdoctoral fellow at CHU Sainte-Justine. “We reviewed molecules with anti-inflammatory properties similar to glucocorticoids and selected about ten. By testing these molecules in preclinical laboratory models, Resolvin-D2 proved to be the best candidate.”

Resolvin-D2 is not only a very effective anti-inflammatory agent, but unlike glucocorticoids, it also stimulates the activity of muscle stem cells that are responsible for muscle healing.

“This property is extremely promising because the function of muscle stem cells is diminished in DMD,” said Dumont. “By restoring their ability to heal, it would therefore be possible to extend the life expectancy of patients, which is currently between 20 and 30 years.”