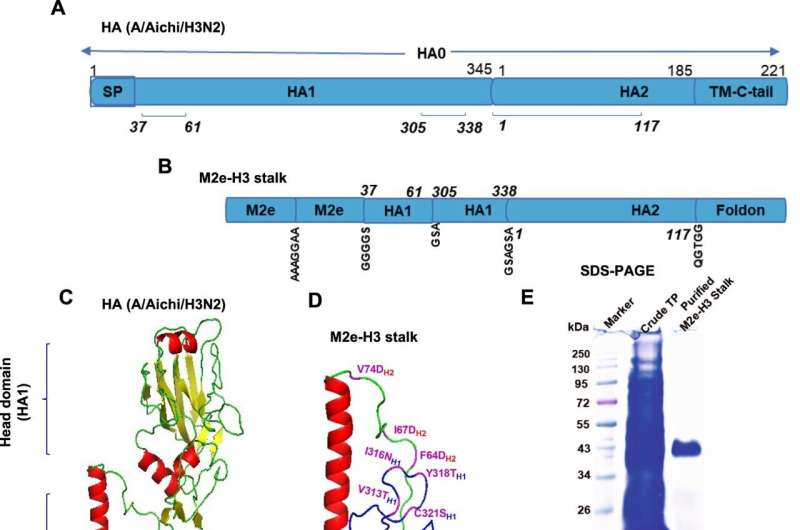 A new universal flu vaccine constructed with key parts of the influenza virus offers broad cross protection against different strains and subtypes of influenza A viruses in young and aged populations, according to a new study by researchers in the Institute for Biomedical Sciences at Georgia State University.

Scientists have faced obstacles in the development of effective vaccines for influenza viruses because the head portion of the influenza virus is constantly changing. When comparing the H1N1 and H3N2 influenza A viruses, particular challenges exist in H3N2 subtypes because of stalk mutations in circulating strains and the unstable structure of stalk proteins for H3N2 viruses. These drawbacks have been difficult to overcome in developing effective H3 stalk-based vaccines.

Vaccine effectiveness against H3N2 was low during the past decade, only about 33 percent, and dropped to 6 percent during the 2014–2015 flu season. New mutations of H3N2 variants emerged with increased virulence. Also, the outbreak of H7N9, another influenza A subtype, caused concern for potential pandemics. Therefore, developing an effective vaccine to protect against these viruses is a high priority.

“The M2e-stalk protein, for the first time, could be easily produced in bacterial cell cultures at high yields and was found to confer protection against heterologous and heterosubtypic cross-group subtype viruses (H1N1, H5N1, H9N2, H3N2 and H7N9) at similar levels in adult and aged mice,” said Dr. Sang-Moo Kang, senior author of the study and a professor in the Institute for Biomedical Sciences at Georgia State. “These results provide evidence that M2e-stalk genetic fusion proteins can be produced in a large scale at low cost and developed as a universal influenza A virus vaccine candidate for young and aged populations.”