NHS patients with a rare eating disorder will be offered therapy

Hundreds of NHS patients will receive therapy for the first time for an eating disorder often triggered by social media.

The service, which will include coaching on how to cope with body images promoted online, will be offered to about 1300 patients and their families in London and the south coast.

If successful, the mental health treatment could be rolled out nationally within years. 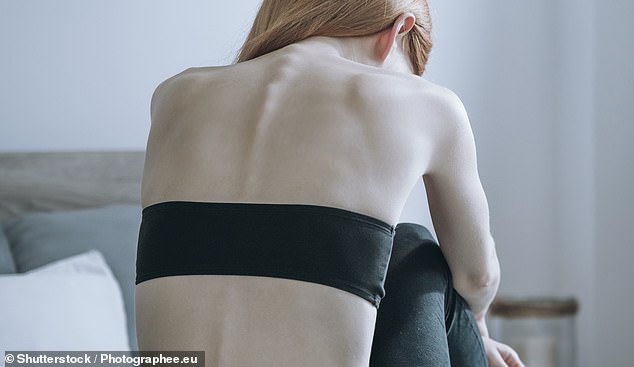 Although not medically recognised as an eating disorder, diabulimia can lead to complications including blindness, amputations and even death.

The condition refers to people with type 1 diabetes who restrict their insulin intake in order to lose weight.

It is thought to affect as many as two in five women and one in 10 men with the condition at some point, and is most common among people aged 15 to 30, according to Diabetes UK.

She said: ‘Diabulimia is a serious eating disorder which – without the right clinical and mental health support – can have devastating consequences, such as stroke, kidney failure and blindness. It can also be fatal.

Diabulimia is the common term for when someone with type 1 diabetes uses insulin omission as a process for weight control.

Omitting insulin puts people at risk of diabetic ketoacidosis, which is fatal if left untreated.

Some people develop symptoms of anorexia nervosa and this also has an impact on diabetic control.

The nutritional consequences of starvation on the brain and body are more marked when insulin/glucose control is suboptimal.

It is estimated that 40 percent of type 1 females aged 15—30 regularly omit insulin for weight control.

‘These pilots are so important and we hope their success will inspire even more investment across England.’

Experts estimate that around 42,000 women and 13,000 men could suffer from the illness.

NHS England said the service, which will offer joined-up treatment for diabetes and mental health, comes amid growing awareness about the condition.

Patients referred will be offered daily structured meal plans and support to manage their insulin intake, as well as therapy for social media.

Claire Murdoch, national director for mental health at NHS England, said there were growing concerns over the harmful effects of social media on young people’s health.

She said: ‘There is emerging evidence that shows why the concerns that NHS England and others have raised about the harmful links between young people’s mental health and some online activities has to be taken so seriously.

‘Everyone has to start taking responsibility, especially social media giants – rather than let problems build up to the point that young people need specialist help from the NHS, like the body image sessions for social media within this new diabulimia service.’