NHS staff could strike within months because of the Government’s ‘insulting’ three per cent pandemic pay rise, it was claimed today.

GMB — one of the country’s largest unions — is now in the final stages of approving industrial action against the proposed raise first touted in July.

It is campaigning for a salary hike of 15 per cent, or £2 more per hour  — whichever is higher.

Officials claim a 3 per cent pay bump will mean an additional £1,000 a year for the average nurse, while porters and cleaners will receive around £540. But the pay will be backdated until this April.

In a ballot set to begin next month, thousands of NHS paramedics, nurses and cleaners will be asked if they are willing to strike over the offer.

If they vote yes, a mass walk-out could take place in the new year, at one of the busiest possible times for the health service.

Meanwhile, GPs are also threatening to take industrial action over plans to name and shame the worst-performing surgeries as part of a Government drive to boost the number of face-to-face appointments. 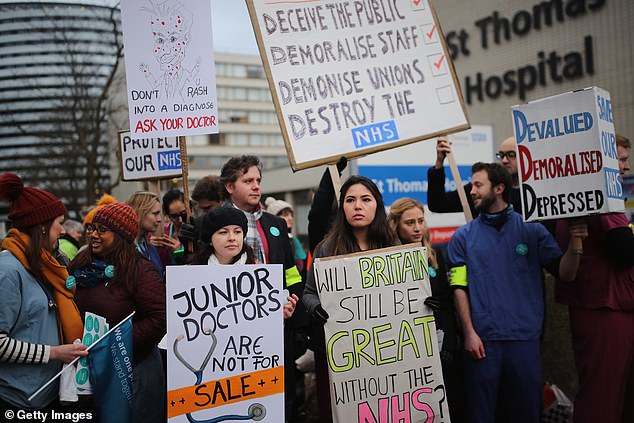 NHS union GMB is balloting its members on strike action which could be held in the new year. The last time NHS staff went on strike in 2016 (pictured) over 20,000 operations were cancelled, the NHS backlog is currently higher than ever before due to Covid disruption

The Government originally offered NHS staff a 1 per cent pay rise earlier this year, which prompted fury from medical and other health staff bodies.

It then upped its salary hike to 3 per cent, amounting to what Government claimed was around £1,000 per year for the average nurse, in recognition of their efforts during the Covid pandemic.

Ministers dismissed strike threats from staff at the time, with the pay rise — backdated to April 2021 — coming while other public sector workers faced a pay freeze.

Unvaccinated NHS staff are set to be told to get their Covid jabs or lose their jobs under plans being considered by the Government.

Some 100,000 healthcare workers — or seven per cent — are still yet to show up for their first dose in England.

But Health Secretary Sajid Javid said bringing in compulsory jabs was the ‘clear direction of travel’ despite fears staff could quit the health service at a critical time.

When asked if the plans could come in this winter, Mr Javid told Sky News: ‘I’m leaning towards doing it.’

He said those who had failed to get the jab were putting seriously ill patients in harm’s way.

Labour leader Sir Keir Starmer said forcing vaccination on medics was a mistake, warning it could exacerbate staffing shortages among doctors and nurses.

The ‘no jab, no job’ policy is already in care homes and staff working in elderly residences must be jabbed by November 11.

Care bosses have warned many homes will be forced to close because they won’t be able to find enough vaccinated workers.

GMB claims its 15 per cent proposal would replace what it describes as a ‘pay cut’ that all NHS staff have suffered over the past decade from pay failing to keep place with inflation.

The union’s national officer, Rachel Harrison, said NHS workers would not stand for what she said amounted to a pay cut from Government.

‘After their heroic efforts during the pandemic, NHS workers are now being asked to swallow this miserable pay cut,’ she said.

‘A 3 per cent pay offer does not restore a decade of real-terms pay cuts, doesn’t recognise their Covid efforts, is below inflation and will not cover the proposed increase in national insurance and pensions contributions. It is in fact, a pay cut.’

Ms Harrison said a 3 per cent pay rise would do nothing to attract staff to work in the NHS and retain those considering leaving.

She said: ‘The NHS is facing a staffing crisis and is creaking under the pressure of the pandemic.

‘A pay award like this is a slap in the face for all health workers and is not the way to fix things.’

GMB members have already overwhelmingly rejected the government’s pay offer, with 93 per cent of the membership opposing the deal.

The strike ballot is the latest threat in a continuation of escalating tensions between the Government and health unions and staff.

Other NHS unions considering industrial action include the Royal College of Nursing (RCN), Unison and Unite.

The RCN ballot is indicative, meaning it is meant to gauge attitude towards industrial action rather than approving any plans to hold strikes or other actions.

Unite and Unison have also held consultative ballots indicating more than 80 per cent of members support taking industrial action over pay this winter.

If any strike action comes to fruition it will be first major NHS walk-out in England in five years.

In 2016 strike action by junior doctors alone was enough to cancel 23,000 operations and nearly 300,000 outpatient appointments in England.

Wider strike action, by more staff groups, could add to an already record backlog of cancelled and postponed operations in England.

More than 1.5million NHS operations were cancelled or delayed in England in 2020, with this expected to balloon to over 2million by the end of this year, according to a report published in July.

In a separate dispute, doctors in England have also threatened to take industrial action in the latest row over a lack of face-to-face appointments.

The threat from doctors came after Health Secretary Sajid Javid published proposals earlier this month to give general practice £250million this winter to offer more in-person appointments and same-day care.

Under the plans, the NHS would publish league tables of how many face-to-face appointments each of the 6,600 surgeries in England offered — effectively ‘naming and shaming’ those that do not offer enough.

But the British Medical Association’s England GP committee rejected the proposals last week, as well as separate rules that would have them oversee the Covid vaccination exemption process and force the highest earning doctors to publicly declare their salary.

They will hold a ballot — at a yet to be confirmed date — on whether they should take industrial action over the plans by refusing to comply with them.

While it would not be an outright strike, the move could see thousands of doctors reduce the amount of work they undertake at a critical time heading into winter.

It is not yet clear what impact the industrial action would have on patient care, but it could lead to rejecting to see more people in-person, fewer visits to care homes and refusing to write certificates for people medically unable to get a Covid jab.

Before the pandemic, around eight in 10 appointments happened face-to-face, but just 58 per cent took place in-person in August.

The number of GP appointments taking place face-to-face tumbled at the start of the pandemic when surgeries were told to see patients remotely where possible. But despite the country largely returning to normal, in-person visits are yet to climb back to pre-pandemic levels. The above graph shows the number of face-to-face GP appointments (red line) by month since the end of 2019

The average number of sessions GPs works in a day have gone down over the last decade while their wage growth has gone up. In 2012 the average GP worked 7.3 sessions a week but this has now fallen to 6.6 a week, the equivalent of just over three days of work a week. In the same period the average GP income went up by more than £6,000. A GP’s daily work is divided into sessions. According to the NHS, a full-time GP works 8 sessions a week, formed of two sessions a day, generally starting at 8am and finishing at 6.30pm, though these hours can vary

This had led to a rift between GPs and some members of the public, with anger over a perceived lack of access to direct consultations amid growing GP salaries.

The Government could also be set threaten 100,000 unvaccinated NHS workers with the sack if they don’t get their Covid jab this winter.

Health Secretary Sajid Javid said bringing in compulsory jabs was the ‘clear direction of travel’ despite fears staff could quit the health service at a critical time.

When asked if the plans could come in this winter, Mr Javid told Sky News: ‘I’m leaning towards doing it.’

He said those who had failed to get the jab were putting seriously ill patients in harm’s way.

But Labour leader Sir Keir Starmer said forcing vaccination on medics was a mistake, warning it could exacerbate staffing shortages among doctors and nurses.

The ‘no jab, no job’ policy is already in care homes and staff working in elderly residences must be jabbed by November 11.

Care bosses have warned many homes will be forced to close because they won’t be able to find enough vaccinated workers.

Ministers launched a six-week consultation on compulsory vaccinations for NHS staff at the beginning of last month. Its results are yet to be published.