Nine in ten toddlers are eating too much sugar

Nine out of ten toddlers are eating too much sugar in their diet putting them at risk of weight gain and took decay, data shows.

National guidelines state children should get no more than five per cent of their calories from ‘free sugars’ – those that are added to products.

But data from Public Health England shows 87 per cent of children aged one-and-a-half to three exceed this.

She hinted that toddler’s snacks would be next to be hit with the sugar tax levy that forced manufactures to slash the sweet stuff in their drinks last year. 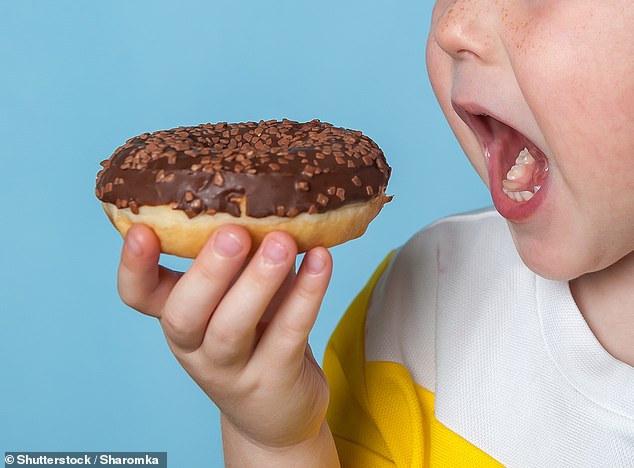 Nine out of ten toddlers are eating too much sugar in their diet putting them at risk of weight gain and took decay, data shows, as the new Public Health Minister, Seema Kennedy has vowed to crackdown on childhood obesity

Ms Kennedy said: ‘This goes further than politics. This is about children’s lives, and we all have a role to play.’

Toddlers get most added sugar from cereal, drinks and sweets, with 12 per cent of their added calories coming from fruit juice.

Ms Kennedy said baby and toddler food were a focus of the upcoming green paper on the prevention of poor health.

She said: ‘Through sensible and proportionate action, we’ve had some early success including cutting thousands of tonnes of sugar out of fizzy drinks.

WHAT IS THE SUGAR TAX?

From April 2018, soft drinks companies have been required to pay a levy on drinks with added sugar.

Fruit juices and milk are not included in the tax.

Some drinks, including Fanta, Lucozade, Sprite, Dr Pepper and Vimto, had their recipes changed so they contained less than 5g of sugar and the price did not need to be put up.

However, others like Coca Cola and Pepsi refused to reduce the amount of sugar and, as a result, the price of them increased.

The Government has predicted the levy will raise £240million a year, which will be spent on sports clubs and breakfast clubs in schools.

The sugar tax raised £153.8m in the first six months after it was introduced, between April and October 2018.

‘As public health minister I’ll be looking at how we can apply what we’ve learnt to a child’s early years using the forthcoming prevention green paper to explore how we can make these products healthier and give parents the honest information to make the best decisions at this crucial time in their child’s life.’

Almost a quarter of children in their first year of primary school in England are overweight or obese, according to the National Child Measurement Programme.

However, in the lead up to an upcoming green paper on the prevention of poor health, Ms Kennedy warned children are facing adverse health risks from a bad diet at a younger age than previously thought.

She said: ‘We all know the scale of the problem – just this week…data showed that being overweight greatly raises the risk of early death, but some refuse to accept these devastating health consequences.

‘One in three children are overweight or obese at the age of 11, hindering their ability to lead long, healthy, happy lives.

‘But shockingly the problem is starting even earlier – toddlers are having double the recommended levels of sugar each day – borne out by the fact that the biggest cause of hospitalisation of children is for tooth extractions.’

Almost nine out of ten tooth extractions in children aged zero to five are due to preventable tooth decay.

Children aged under four in Britain consume an average 32.6 grams of free sugars a day, which is the equivalent of eight sugar cubes.

Only 13 per cent fell below the five per cent free sugar limit in 2015-16, The National Diet and Nutrition Survey by Public Health England revealed.

Free sugars are those added to foods, rather than naturally occurring like sugar in fruit.

The ministers vow to tackle the country’s consumption of sugar echo those of top doctor Professor Dame Sally Davies.

Since the controversial sugar tax levy, the Chief Medical Officer demanded a tax on milkshakes, chocolate, crisps and junk food.

She added that she was horrified by the amount of salt and sugar added to baby food.

HOW IS THE GOVERNMENT TRYING TO STOP OBESITY?

The proposed plans to restrict the number of calories in pizzas, pies and ready meals comes as part of drastic Government moves over the past year to try and cut down on obesity.

A tax on added sugar in drinks came into force in April, requiring companies to hand over more of the money they make from drinks which contain more than 5g of sugar per 100ml of liquid.

As a result, many soft drinks have had their recipes changed in order to avoid paying the tax and putting prices up. Sugary drinks are the biggest single source of sugar for children and teenagers.

The Government is also considering making it compulsory for all restaurants and fast food outlets to display the number of calories in each meal on their menu.

Some food outlets already do this but there can be unexpected numbers of calories in popular dishes, and the Government is consulting on the plans before a decision is due in spring.

In March this year, Public Health England warned Brits to crack down on the number of calories they’re eating, advising people to consume no more than 1,600 per day.

The watchdog says adults shouldn’t eat any more than 400 calories for breakfast, 600 for lunch and 600 for dinner – this would allow for some snacks, experts said.

Examples of 600-calorie meals include a tuna pasta salad and a small cereal bar, a chicken salad sandwich and a pack of crisps, or half a pepperoni pizza with a quarter of a garlic baguette and a banana.

In the same announcement PHE said shops selling the food should cut down their portion sizes to help people slim their waistlines.

Plans are also being considered to ban advertising junk food on television before 9pm, to reduce the number of children who are exposed to it.