Quadriplegics have been offered fresh hope with the invention of a robotic skeleton controlled by brain signals.

One wheelchair-bound patient paralysed from the neck down following a traumatic spine injury can move again by using the pioneering device.

Heartwarming footage captured the unnamed 28-year-old ‘walking’ after months of getting to grips with the gadget.

His limbs are strapped to the robot, which he controls with his mind. His muscles are still paralysed.

The breakthrough has been published in medical journal The Lancet Neurology, with researchers labelling the exoskeleton an ‘exciting advance’.

However, the technology is still in its early days and far from being used in daily life. Further trials on other patients are planned.

Currently there is no cure for quadriplegia, forcing most sufferers to spend the rest of their lives in wheelchairs and needing round-the-clock care. 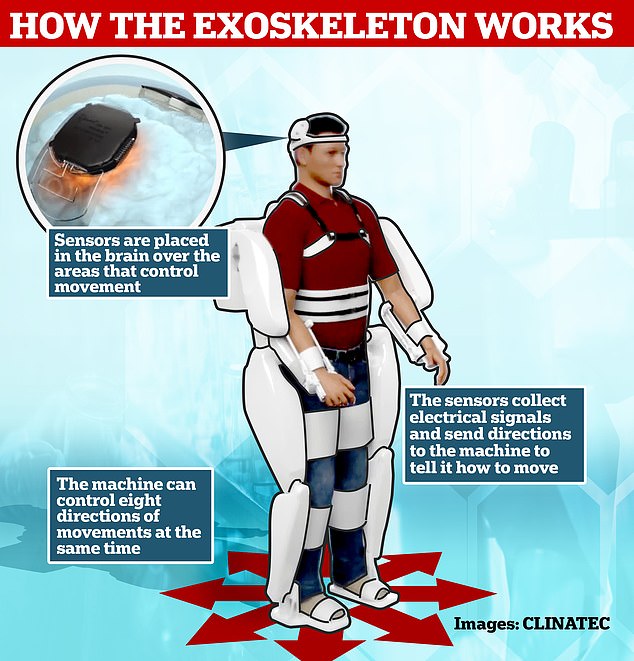 The robotic skeleton is controlled by brain signals that are collected with sensors. They are placed between the skull and the brain over areas that control movement 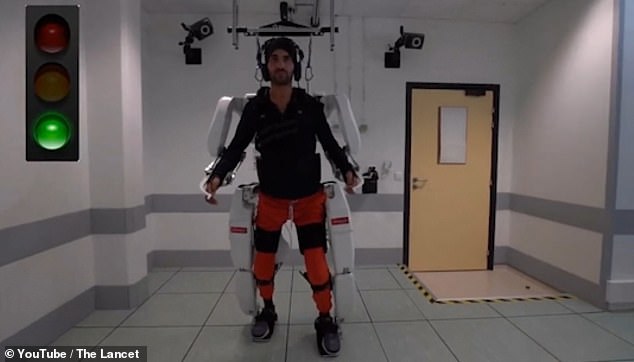 Heartwarming footage captured the unnamed 28-year-old ‘walking’ after months of getting to grips with the device (pictured). It’s attached to harness on the ceiling for support

If proven to work on other paralysed patients, the device could revolutionise life for the estimated 50,000 Britons and 290,000 Americans living with a spinal cord injury.

The patient studied had one of a cervical spinal cord injuries, considered to be one of the most severe types of them all.

Around 20 per cent of these patients are left quadriplegic, meaning all four limbs are partially or completely paralysed.

It’s not clear how he received his injury, but the majority of patients with spinal cord injuries are involved in a car accident, figures show.

The man was paralysed from the shoulders down, with only some movement in his biceps and left wrist to operate his wheelchair joystick.

But now, after two years of brain training, the patient is finally able to experience movement again, researchers at the University of Grenoble, France, revealed.

Lead author Professor Alim-Louis Benabid said: ‘Our patient already considers his rapidly increasing prosthetic mobility to be rewarding, but his progress has not changed his clinical status.’

If the spinal cord is damaged or injured, messages to and from the brain don’t work properly, and movement stops.

The brain still activates, but communication through the spinal cord to the muscles is stopped.

The exoskeleton, which hasn’t been named, is designed to collect these messages and move how the patient wishes to.

Sensors are placed in the head between the skull and the brain over areas of the brain that control movement in the limbs. 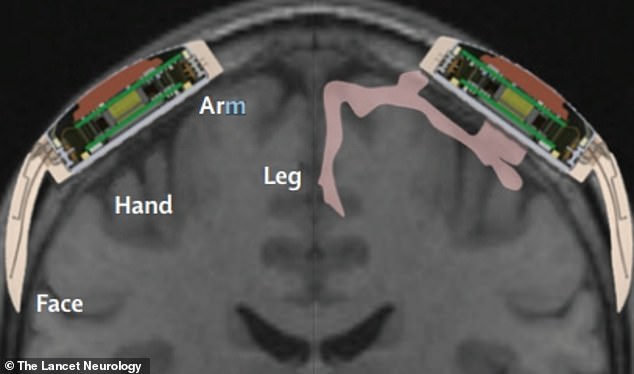 Sensors are placed in the head between the skull and the brain over areas that control sensation and motor function. Pictured, the placement of the sensors 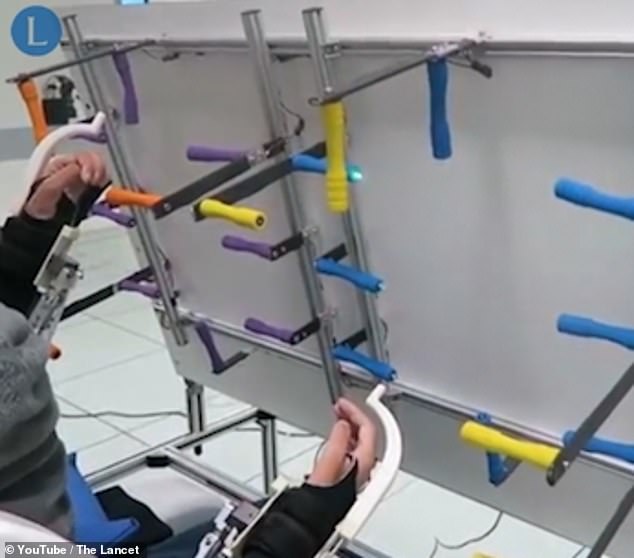 Using the avatar, video game and exoskeleton combined, the man covered a total of 145 metres with 480 steps, according to findings published in The Lancet Neurology

This placing would vary depending on which parts of the spinal cord are damaged and what movements a patient isn’t able to do.

Each sensor contains a grid of 64 electrodes which collects brain signals, decodes what they mean, and then directs the exoskeleton.

WHAT IS A CERVICAL SPINAL CORD INJURY?

The cervical spinal cord is the uppermost region of the vertebrae and is in the neck.

The higher the injury to the spine, the more severe the damage and the more likely it will be life threatening.

A patient may not be able to breathe on his or her own, cough, or control bowel or bladder movements.

Ability to speak is sometimes impaired or reduced.

When all four limbs are affected, this is called tetraplegia or quadriplegia.

It requires complete assistance with activities of daily living, such as eating, dressing, bathing, and getting in or out of bed.

The patient may be able to use powered wheelchairs with special controls to move around on their own, but will not be able to drive a car on their own.

An ‘incomplete’ spinal cord injury means the ability of the spinal cord to convey messages to or from the brain is not completely lost.

Although a quadriplegic cannot move their limbs, ‘incomplete’ often means they still have some sensation in their arms and legs, even if it is faint.

Some quadriplegics have been able to regain some function once swelling goes down or if they have surgery to remove something pressing on their spinal cord.

An algorithm uses artificial intelligence to progressively learn how the patient thinks.

Although the gadget is ‘exciting’, Professor Tom Shakespeare, of the London School of Hygiene and Tropical Medicine, said it must be remembered that the research is in its infancy.

Writing in a linked comment, also published in The Lancet Neurology, he said: ‘A danger of hype always exists in this field.

‘Even if ever workable, cost constraints mean that high-tech options are never going to be available to most people in the world with spinal cord injury.

‘One analysis suggests that only 15 per cent of the world’s disabled population have access to the wheelchairs or other assistive technologies that they need.

‘An originality of this study is showing the control of four limbs, whereas in most previous studies only one limb was controlled.

‘Although this study presents a welcome and exciting advance, we must remember that proof of concept is a long way from usable clinical possibility.’

The patient spent two years progressing with the exoskeleton and practiced using video simulations – such as making an avatar walk in a video game.

He was able to make the exoskeleton walk while attached to a suspended harness on the ceiling to support him.

The exoskeleton is able to move in 14 dimensions – turning a switch uses only three, while reaching an object and turning the wrist uses eight.

Using the avatar, video game and exoskeleton combined, he covered a total of 145 metres with 480 steps over 39 sessions.

The study found the patient was able to perform tasks with an average of 10-20 per cent greater success using the exoskeleton than with the avatar.

The authors suggest this is because feedback with the avatar is purely visual, whereas with the exoskeleton the patient gets richer feedback from the real world.

The system has promise for being suitable for daily use because it didn’t need to be re-set for up to seven weeks.

Interfaces placed in the brain that collect messages have been developed before, but they haven’t been wireless.

Professor Benabid said: ‘Ours is the first semi-invasive wireless brain-computer system designed for long term use to activate all four limbs.

‘Previous brain-computer studies have used more invasive recording devices implanted beneath the outermost membrane of the brain, where they eventually stop working.

‘They have also been connected to wires, limited to creating movement in just one limb, or have focused on restoring movement to patients’ own muscles.’

The researchers now hope to conduct trials on more patients. 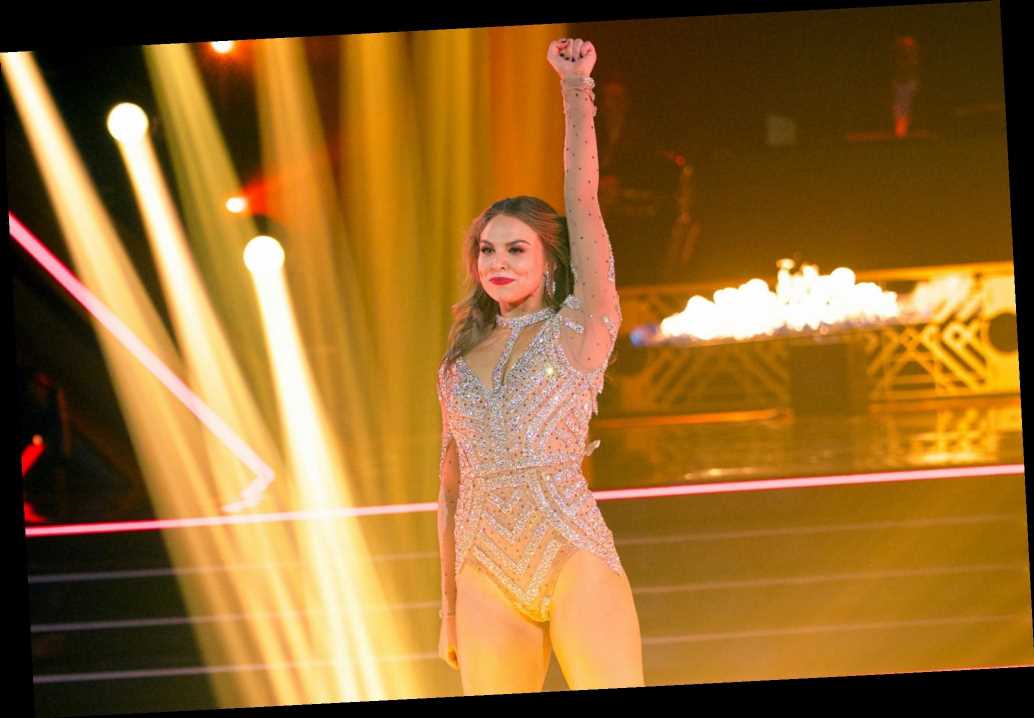 Hannah Brown Opens Up About DWTS Injuries, Says She Hasn't Been Able to Workout in Months