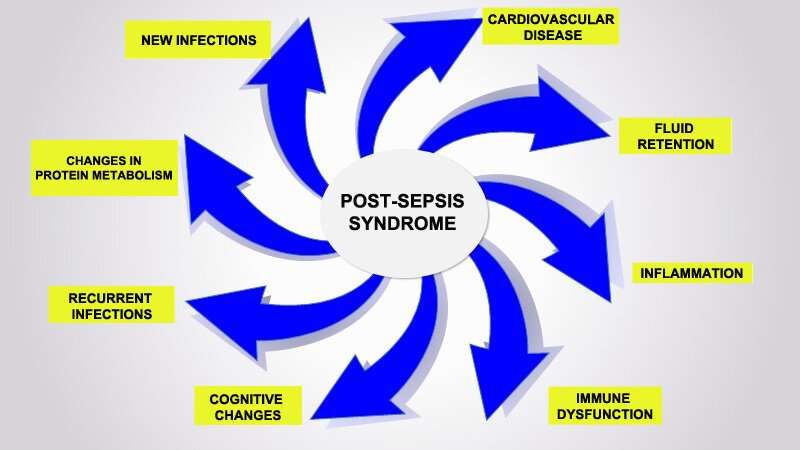 An article published in Frontiers in Immunology suggests that sepsis can cause alterations in the functioning of defense cells that persist even after the patient is discharged from hospital. This cellular reprogramming creates a disorder the authors call post-sepsis syndrome, whose symptoms include frequent reinfections, cardiovascular alterations, cognitive disabilities, declining physical functions, and poor quality of life. The phenomenon explains why so many patients who survive sepsis die sooner after hospital discharge than patients with other diseases or suffer from post-sepsis syndrome, immunosuppression and chronic inflammation.

The article presents a review of studies conducted to investigate cases of septic patients who died up to five years after being discharged from hospital.

Considered one of the leading causes of death in intensive care units, sepsis is a life-threatening systemic organ dysfunction triggered by the organism’s dysregulated response to an infectious agent, typically a bacterium or fungus. The defense system injures the body’s own tissues and organs while combating the infectious agent.

If it is not promptly recognized and treated, the condition can lead to septic shock and multiple organ failure. Patients with severe COVID-19 and other infectious diseases run a heightened risk of developing and dying of sepsis.

New cases of sepsis are estimated to total some 49 million per year worldwide. Hospital mortality from septic shock exceeds 40% globally, reaching 55% in Brazil, according to the Sepsis Prevalence Assessment Database (SPREAD) study, conducted with support from FAPESP.

“The massive infection and the accompanying intense immune response with a cytokine outpouring during sepsis may promote irreversible cell metabolic reprogramming. Cell reprogramming is unlikely to occur in leukocytes or bone marrow only. This might happen in several tissues and cells that prompt systemic organ dysfunctions […] Bacteria can transfer genetic material to host cell DNA as eukaryotic cells develop tools to protect themselves against the microorganism invasion. The latter may induce cell biology and metabolic reprogramming that remains even after the infection’s elimination,” the researchers state in the article.

According to Raquel Bragante Gritte, joint first author with Talita Souza-Siqueira, one of the hypotheses investigated by the group was that metabolic reprogramming starts in the bone marrow, whose cells acquire a pro-inflammatory profile. “Our analysis of blood samples from patients even three years after ICU discharge showed that monocytes (a type of defense cell) were activated and ready for battle. They should have been neutral. Monocytes are normally activated only when they are ‘recruited’ to the tissue,” Gritte told Agência FAPESP. Both Gritte and Souza-Siqueira are researchers at Cruzeiro do Sul University (UNICSUL) in the state of São Paulo, Brazil.

The Frontiers in Immunology article is one of the first to be published by the group on this subject. The co-authors include two medical doctors and professors at the University of São Paulo (USP): Marcel Cerqueira Cesar Machado, principal investigator for a project supported by FAPESP; and Francisco Garcia Soriano. Their research line has brought to light recent discoveries in studies of post-discharge sepsis patients available from PubMed, a leading database of references and abstracts on life sciences and biomedical topics.

According to Gritte, the group conducted a follow-up study of 62 patients for three years after discharge from the ICU at USP’s University Hospital, analyzing alterations in monocytes, neutrophils and lymphocytes, as well as microRNAs, to try to identify prognostic markers and factors associated with post-sepsis syndrome.

“Our hypothesis is that white blood cells conserve a memory of sepsis, which helps explain why patients remain sick after they leave hospital,” said Rui Curi, another co-author of the article. Curi is a professor at UNICSUL and a director of Butantan Institute.

In the article, the researchers suggest sepsis may generate a specific macrophage phenotype that remains active after discharge from hospital. “Cell metabolism reprogramming is also involved in the functions and even generation of the different lymphocyte subsets. Several stimuli and conditions change lymphocyte metabolism, including microenvironment nutrient availability,” they write.

According to Gritte, next steps include studies of bone marrow to understand how cells are reprogrammed by sepsis. “We think the key to this alteration is in bone marrow,” she said. “However, another possibility is that activation occurs in the blood. We’ll need to do more in-depth research to find answers.”

The knowledge acquired in this study can serve as a basis for the development of strategies to minimize or block post-sepsis alterations.

Last year the World Health Organization (WHO) published its first report on the global epidemiology of sepsis, noting that much of the burden of sepsis incidence and mortality weighs on low- and middle-income countries and that a severe lack of population-based sepsis data, especially in such countries, hinders efforts to address the problem.