Pollen count: High risk to hay fever sufferers today – where are you at risk?

Pollen count readings are the best way for hay fever patients to know whether they’re at risk of symptoms. Pollen is a fine powder that’s released by plants, and it contains certain proteins that can irritate the noses of some people. Around 20 per cent of all people in the UK have hay fever, making them more susceptible to symptoms during pollen count spikes. People living in the East of England are most at risk of hay fever symptoms today, it’s been revealed.

All parts of the East of England – from the southeast, up to the northeast – can expect ‘High’ levels of pollen today, according to the Met Office’s pollen forecast.

Meanwhile, ‘Moderate’ pollen levels are forecasted for the southwest, Wales, and the majority of Scotland.

Northern Ireland and the Orkney and Shetland Islands are forecasted ‘Low’ levels of pollen, once again.

As the week progresses, the amount of pollen in the air is expected to fall, revealed the forecast.

Pollen levels tend to be highest at the very start of the day and the very end of the day, said charity Allergy UK.

“Everyone loves to be in the garden on a sunny day, but for those with allergies it can make gardening, or just relaxing, a miserable time,” it said. 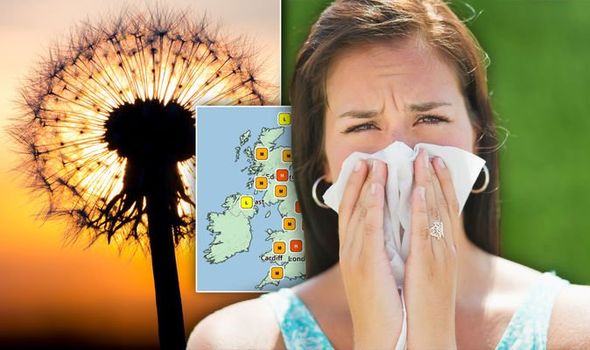 “Pollen levels are at their highest at the beginning of the day, when they rise with the warming air, and at the end of the day when it’s cooling down.

“Counts will increase in dry warm weather, especially if it’s windy. So avoid going outside – and especially avoid strenuous activity – at these times.”

Between January and May, the pollen in the air is mainly caused by trees. This type of pollen can be the most hazardous, it added.

“Birch is one of the most potent – it can trigger not only hay fever, but also oral allergies [i.e. allergies to certain foods].

“In recent years Birch has become very popular to plant as a street or garden tree, distinguished by its very attractive silvery bark.” 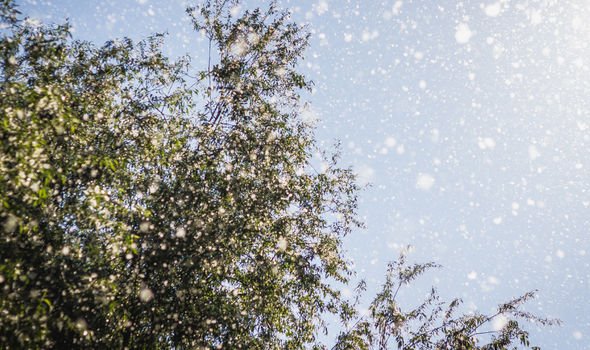 11 Tips to get you through hay fever season

Hay fever season is upon us once again, here are our top tips to reduce those annoying pollen allergy symptoms.

Avoid parks or fields, particularly in the early evening when there’s a lot of pollen floating at nose level

Hay fever affects around a quarter of all adults in the UK, and about 15 per cent of all children.

It’s a risk factor for developing asthma, and it can even significantly affect your work or school performance.

The most common hay fever symptoms include sneezing, having an itchy nose, congestion, and having watery eyes.

The condition can even cause some patients to develop breathlessness, nosebleeds, and even sinus pain.

You should speak to a doctor if your hay fever symptoms can’t be controlled by over-the-counter medication.