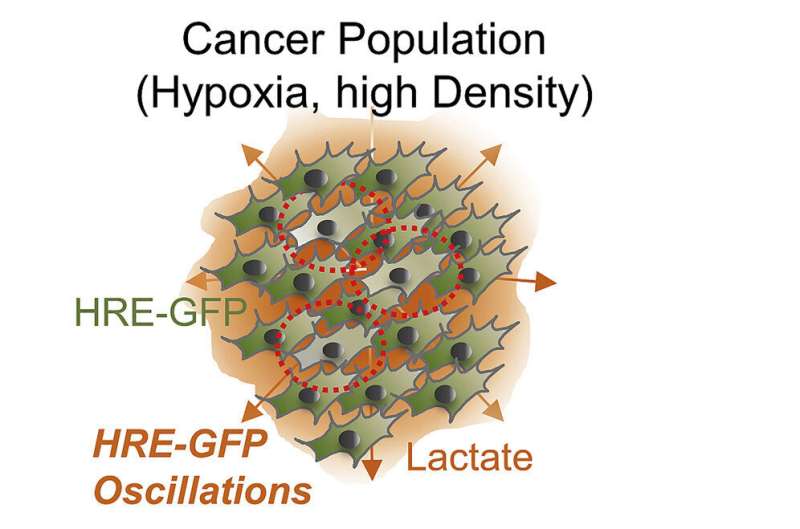 Yale researchers have made a discovery that changes conventional thinking about the role that oxygen plays in the growth of tumors—an area of cancer research that has been intensely studied in recent years.

The results, from the lab of Andre Levchenko, the John C. Malone Professor of Biomedical Engineering, are published in Cell Systems. Other groups collaborating on this study were directed by Chi V. Dang (Johns Hopkins University) and Kshitiz (University of Connecticut).

When tumors start running out of oxygen, they can switch on hypoxia-inducible factor (HIF-1alpha)—a transcription factor, which is a protein that controls the activity of genes. As a result of HIF-1alpha activation, the expression of hundreds of genes can change and dramatically alter the behavior of cancer cells.

Although the increase in HIF-1alpha is thought to be steady, the new study led by Levchenko discovered that the levels of this molecule can also repeatedly rise and fall in small groups of cells, particularly in areas of high cell density. The effects of this oscillation are profound, as it allows cancer cells starving for oxygen to resume division and growth. It can also promote pro-cancer genes and inhibit anti-cancer genes.

“In many ways, it redefines the very fundamental textbook version of how things happen,” said Levchenko, who is also director of the Yale Systems Biology Institute at Yale’s West Campus. “HIF-1alpha is, without exaggeration, one of the key molecules that people look at when they look at cancer.”

“It is a large collaboration across many institutions, a testament to how deep scientific questions require integration of many types of expertise to come together,” he said.

HIF-1alpha essentially acts as a red flag for when oxygen is down. “It’s a kind of emergency signal telling cells “Now we need to behave differently because oxygen is no longer there,'” Levchenko said. He added that it can also encourage the growth of blood cells, which can indirectly restore oxygen levels. “It’s something that acts as both a sensor and a regulator of lack of oxygen, and that essentially changes almost everything cells do.”

Cells displaying oscillatory behavior were detected using various fluorescent biosensors. Importantly, the researchers found that the oscillations in HIF-1alpha trigger certain genes within a cell. These oscillation-specific genes were rich in oncogenes, which promote cancer. At the same time, tumor suppressor genes went down.

“It tells us that there’s this particularly important other kinetic or dynamic behavior that we didn’t realize was there, and furthermore, has really important consequences,” he said.

Detecting oscillation-specific genes in tumors could be an indication of an aggressively growing cancer, which could lead to new methods of earlier diagnoses. Levchenko said that pharmacology companies have expressed interest in the work as the basis for new diagnostic tests.