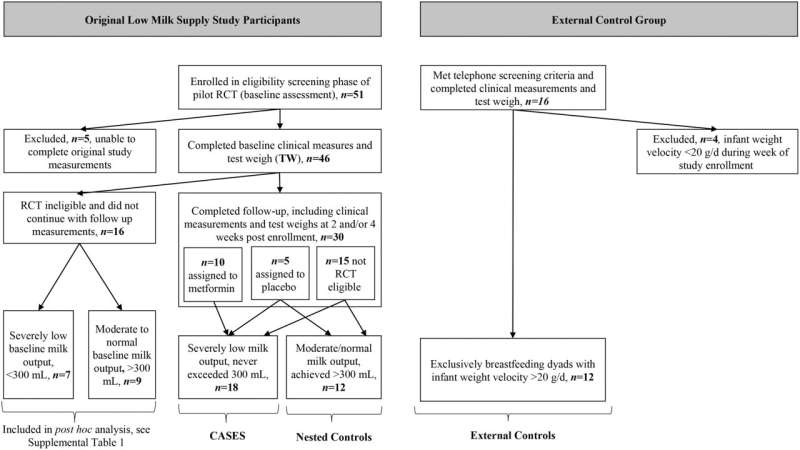 New research from UC shows that poor metabolic health parameters are linked to low breast milk production. The study was published in the journal Breastfeeding Medicine.

“We wanted to see if we could understand what stands out as different in these moms. So, we conducted a case control study to see why, despite their best efforts at doing everything right with breastfeeding, they were not making enough milk,” says Laurie Nommsen-Rivers, Ph.D., associate professor of nutrition, and the Ruth Rosevear Endowed Chair of Maternal and Child Nutrition in the UC College of Allied Health Sciences. “The prevailing dogma is if you try hard enough at breastfeeding, your body will be able to do this.”

Nommsen-Rivers and her team analyzed data from a randomized controlled trial from February 2015 to June 2016 involving women screened for a low-milk supply. Mothers who were aged 20 years or older and one to eight weeks postpartum with a healthy infant born at 37 weeks of gestation or later were included. Participants completed at-home infant test-weighing to measure milk output.

“We’ve seen hints in these large epidemiologic studies of factors related with insulin resistance, so that’s why we looked at the whole metabolic panel,” she says. “All those things that contribute to your risk of metabolic syndrome were examined: blood pressure, plasma lipids, fasting glucose, fasting insulin, insulin sensitivity. Across the board, all those measures were significantly worse in the moms with unexplained persistent low-milk supply as compared to the control group.”

Nommsen-Rivers says for the last decade or so, large epidemiologic studies have consistently shown that women with a higher body mass index (BMI) have a shorter breastfeeding duration. That sparked many theories, including lower motivation or lower effort, but these theories are really rooted in weight stigma, according to Nommsen-Rivers. She says this is an understudied area even though there is strong evidence of higher BMI being associated with worse metabolic health.

“This is the first study where we have validated their persistent low-milk supply,” Nommsen-Rivers says. “This is not just simply based on a woman thinking, ‘Oh, I didn’t have enough milk, that’s why I gave my baby formula.’ Our research results strongly point to there being a physiologic basis for their low-milk production. It wasn’t due to these women not trying hard enough.”

This study, according to Nommsen-Rivers, is getting researchers one step closer to developing clinical criteria for screening women in pregnancy to identify what the metabolic health picture looks like in women who succeed with exclusive breastfeeding as compared to those that are unable to produce sufficient breast milk despite following best practices for breastfeeding management.