Revealed: Why you see alluring food EVERYWHERE when you’re on a diet

Revealed: Why you see alluring food EVERYWHERE when you’re on a diet

Anyone trying to switch to a healthier diet will notice the chocolate and biscuits crying out to them from supermarket shelves.

Tasty but unhealthy food suddenly appears everywhere when you start trying to avoid it, and scientists claim to have finally discovered why.

A study has revealed thinking about food in any way – even by just trying to cut it out – can make you more likely to overeat.

People find it hard to remember or think about other things when they are distracted by pictures of food, it found, explaining why you feel surrounded by irresistible treats while on a diet. 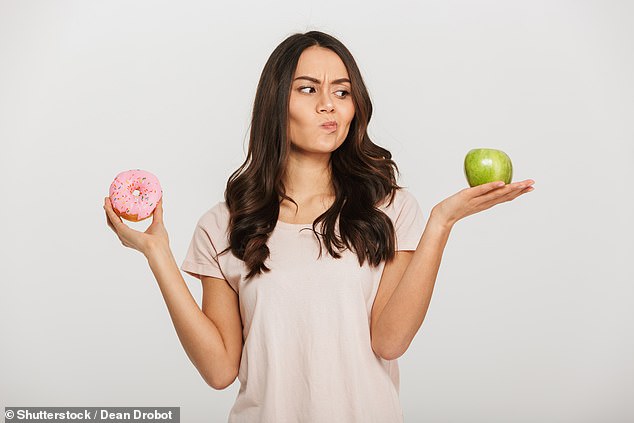 In a study people found it harder to remember the position of a shape on a screen when it was shown alongside a picture of a pizza because they were distracted by the food, researchers found (stock image)

Researchers at the University of Birmingham asked 90 volunteers to memorise a picture of food, such as pizza.

They were then asked to identify the position of a circle on the screen, as another shape popped up in an attempt to distract them.

For some of the trials, a picture of the memorised food was placed alongside the circle. In others, it was put next to the distractor shape.

Around half of the volunteers were obese, while the others were deemed to be a healthy weight.

The trial was then repeated by asking the participants to remember a picture of a non-food item, such as a spanner.

The researchers, led by Dr Suzanne Higgs, found all participants found it harder to spot the circle during the task using images of food.

And they found it even more difficult when the image of alluring food was placed alongside the distractor, rather than the circle.

The results, published in the International Journal of Obesity, showed the effect was greater for the overweight participants.

HOW MANY CALORIES DO I NEED EACH DAY?

The basic amount of calories an average adult needs per day is 2,000kcal for women or 2,500kcal for men.

This is based on the amount of energy the body needs to carry out basic functions and to walk and work throughout the day.

People who exercise a lot need to eat more calories to fuel their efforts, and young people and children burn more energy, too.

If you eat more calories than you burn in a day, you will get fatter.

Eating fewer calories than you burn will make you lose weight.

Foods which are processed and have high levels of carbohydrate, sugar and salt have higher calorie numbers than fresh fruit and vegetables.

All of the participants were weighed a year after the study, according to a report of the study by the British Psychological Society.

And results showed those who struggled the most with the task were more likely to have had larger increases in their BMI.

‘We suggest that thinking about food increases the likelihood of overeating,’ Dr Higgs said.

She explained that this is because ‘a person is more responsive to the presence of food in the environment’.

Dr Higgs warned that ‘in the long run, this kind of opportunistic eating could lead to weight gain’.

And she explained that solving puzzles or playing games could help to distract people from thinking about food.

In more bad news for dieters, an expert this week warned people’s January diets are ‘destined to fail’ because the human mind is hard-wired to hate change.

Dr Jason McKeown, a neuroscientist at the University of California, San Diego, added simply cutting down calorie intake in a bid to lose weight is particularly unsuccessful.

He told MailOnline: ‘This is likely going to make you so unhappy and hungry that you’ll give up and quickly regain the weight.’

He added: ‘Diets in January can often end up being more of a marketing ploy than a success, they are destined to fail – even for the strongest of minds.

‘The human brain is well known to be very resistant to change, and unfortunately that includes your sudden January diet.’