Some 34,000 children under the age of ten were admitted to hospital each year because of tooth decay during the last three years.

The Faculty of Dental Surgery (FDS) said all schools in England should be encouraged to become sugar-free to tackle the problem.

It warned that children suffering from tooth decay could struggle to concentrate in lessons and might need time off school to see dentists, or even need to have teeth removed. 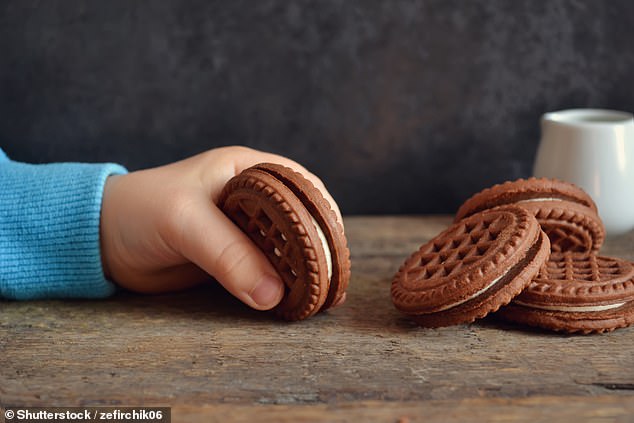 Some 34,000 children under the age of ten were admitted to hospital each year because of tooth decay during the last three years. The Faculty of Dental Surgery (FDS) said all schools in England should be encouraged to become sugar-free to tackle the problem

In a report, the FDS – part of the Royal College of Surgeons – said 102,633 children were admitted to hospital because of tooth decay between April 2015 and March 2018.

Almost a quarter of five-year-olds have visible decay, and four in ten under-18s did not visit an NHS dentist in 2018, despite being eligible for free dental care.

Previous NHS research found more than 100 children a day have rotten teeth removed in hospital, and 90 per cent of those cases could have been prevented.

In 2015 alone, 7,926 children under the age of five had one or more teeth extracted in hospital.

A major study earlier this year found nine in ten toddlers were eating too much sugar, and that 22 per cent were overweight by the time they started primary school.

The FDS called on the Government to stand by its sugar tax on soft drinks and to extend it to include sugary dairy drinks like milkshakes.

It said supervised tooth brushing schemes should be put in place to educate children at risk of decay.

HOW MUCH SUGAR IS TOO MUCH?

The amount of sugar a person should eat in a day depends on how old they are.

Children aged four to six years old should be limited to a maximum of 19g per day.

Seven to 10-year-olds should have no more than 24g, and children aged 11 and over should have 30g or less.

Popular snacks contain a surprising amount of sugar and even a single can of Coca Cola (35g of sugar) or one Mars bar (33g) contains more than the maximum amount of sugar a child should have over a whole day.

A bowl of Frosties contains 24g of sugar, meaning a 10-year-old who has Frosties for breakfast has probably reached their limit for the day before they even leave the house.

Children who eat too much sugar risk damaging their teeth, putting on fat and becoming overweight, and getting type 2 diabetes which increases the risk of heart disease and cancer.

Professor Michael Escudier, dean of the FDS, said: ‘It is incredibly worrying that levels of tooth decay among children in England remain so high – especially when you consider that it is almost entirely preventable through simple steps such as brushing twice a day with appropriate strength fluoride toothpaste, visiting the dentist regularly and reducing sugar consumption.

‘The FDS believes that limiting the availability of sugary foods and drinks in schools is essential to reducing the amount of sugar our children consume.

‘While the Government has committed to reviewing school food standards, we would like to see them go beyond this to encourage all schools in England to become sugar-free. We would also support the publication of nutritional guidelines for packed lunches.

‘The scourge of child dental decay cannot be allowed to continue. Everyone needs to play their part in ensuring our children have healthy, happy teeth.’

The FDS also recommended that action be taken to reduce the amount of sugar in baby food.

It warned there was a significant difference between levels of child tooth decay in deprived areas of England, where 33.7 per cent of five-year-olds had decay, to more affluent regions, where the figure fell to 13.6 per cent.

The call for schools to go sugar-free could prove controversial. A primary school head teacher who banned pupils from bringing in sweets on their birthday said some parents had called the move ‘cruel’.

Chasey Crawford-Usher, head of Wateringbury Primary School in Kent, introduced the ban earlier this year and said birthday sweets were a ‘huge problem’ as it meant sweets were handed out most weeks.

She said some parents were supportive but others found the move too draconian. Other schools have imposed similar bans.