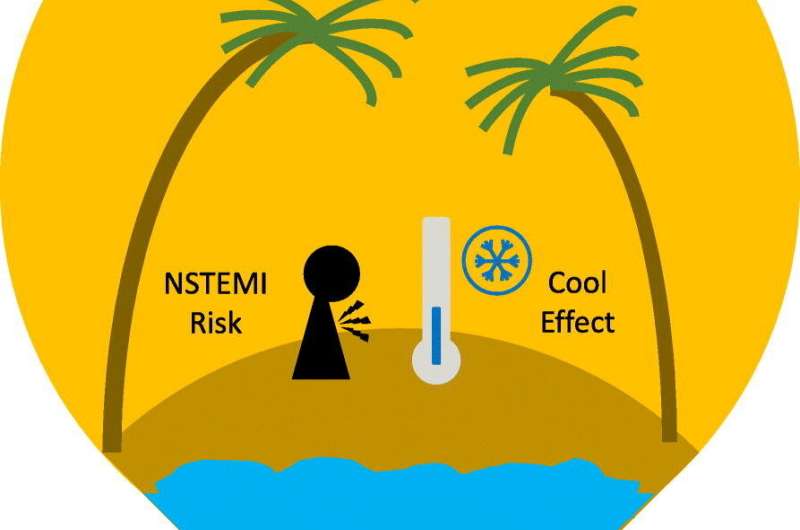 Scientists have long known that temperature changes impact the incidence of heart attacks. However, most of the research done so far has been in temperate climates, where temperatures range widely.

Now, a team of researchers has investigated how the narrow temperature ranges of a tropical climate impact the incidence of a specific type of myocardial infarction (the medical term for a heart attack) in Singapore. The researchers say their findings, published in the journal Science of the Total Environment, could have health policy implications for populations within cosmopolitan cities in the tropics.

“Using 10 years of nationally collected data, we found strong evidence that a drop of 1°C in ambient temperature increased the risk of a type of acute myocardial infarction in the population by 12%,” said co-senior author Professor Marcus Ong, Director of the Health Services & Systems Research Program and the Pre-hospital & Emergency Research Center (PERC) at Duke-NUS Medical School.

“Furthermore, people aged 65 and above appeared to be about 20% more vulnerable to cooler temperatures compared to younger people,” added Prof. Ong, who is also Senior Consultant at the Department of Emergency Medicine at Singapore General Hospital (SGH).

The study, which was conducted in collaboration with Singapore’s National Environment Agency (NEA), analyzed daily patient records from the Singapore Myocardial Infarction Registry. The researchers were specifically looking for people who experienced non-ST-segment elevation myocardial infarction (NSTEMI). This is a type of acute heart attack that happens when a blood vessel feeding the heart becomes partially blocked. When doctors examine the patient’s electrocardiogram (ECG) results, they don’t find the easily identifiable ST elevation that signifies another type of heart attack, STEMI, which occurs when the coronary artery is completely blocked. Since the 1980s, the incidence of NSTEMI has risen while that of STEMI has declined.

The researchers were able to collect 60,643 reports of NSTEMI between 2009 and 2018. They then statistically analyzed how the onset of NSTEMI in these patients correlated with local meteorological data obtained from weather stations across Singapore, including mean temperature and rainfall.

“Our study found that even in a relatively warm part of the world, cooler ambient temperatures increased the risk of heart attacks,” said Dr. Andrew Ho, one of the study’s first authors, who is an Assistant Professor with PERC and an Associate Consultant with SGH’s Department of Emergency Medicine. “This improves our understanding that deviations from the temperature that one is used to can lead to harmful bodily stress. Consistent with our previous studies that showed that the elderly were more susceptible to environmental stressors including air pollution, we found some evidence that this group of individuals were at greater risk of heart attacks at cooler temperatures.”

“There are several individual-level risk factors for cardiovascular disease, but none are as widely experienced as weather patterns,” said Dr. Joel Aik, an environmental epidemiologist and co-senior author of the study from NEA, who is also an Adjunct Assistant Professor with PERC. “Daily weather variations have the capacity to trigger cardiovascular disease events in at-risk individuals, with particular implications for Singapore’s aging population. In the context of climate change, these findings highlight a risk factor of substantial public health concern.”