Scientists have invented cooling cases for testicles in a bid to boost men’s fertility.

The CoolMen testicle cooler is attached to a belt and should be worn for 12-16 hours a day for up to a month to boost men’s sperm count.

Testicles have to be one to two degrees cooler than a man’s body temperature for optimum sperm production, but tight clothes, saunas and laptops can heat them up.

Costing around £240 ($304), the CoolMen is connected to the wearer’s smartphone to allow real-time temperature monitoring and is currently undergoing medical testing. 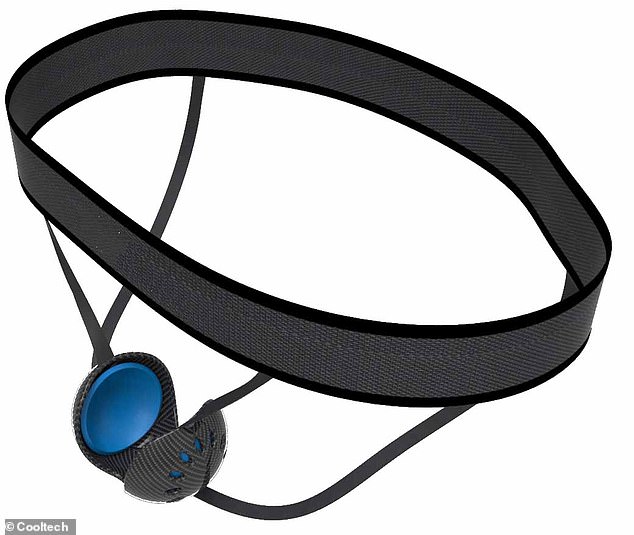 The CoolMen is a lightweight, flexible device which is worn on the testicles to cool them down and boost sperm production, improving a man’s chances of conceiving a child

Polish company Cooltec has invented the device – which cups the testicles in a chilled pouch – in a bid to help men conceive, Business Insider reports.

Recent studies show sperm counts around the world are plummeting – men living in Western countries are thought to have nearly 60 per cent less than 40 years ago.

Floundering fertility rates are thought to be down to unhealthy modern lifestyles which involve smoking, bad diets, obesity, exposure to plastics and inactivity.

‘Disorders in sperm production are most commonly associated with elevated testicular temperatures,’ Cooltec claims on its website.

‘Elevated temperatures result in the death of cells from which spermatozoa are formed and further stages of the spermatogenesis process.

‘Because of this, the quality of the semen from superheated testicles decreases.’

The firm claims up to 50 per cent of infertility cases among couples are down to poor sperm quality, and cooling the testicles can increase sperm counts in weeks.

Developers also say the device could treat varioceles, a type of varicose vein inside the scrotum which can cause infertility. 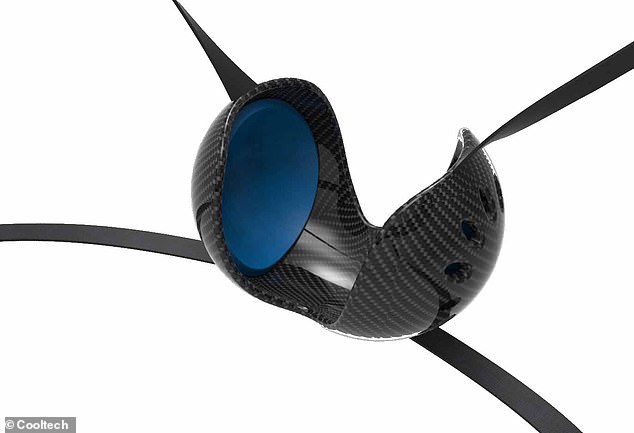 The testicles are placed into the chilled pouch, which developers say should be worn for 12-16 hours a day for three to four weeks to see improvements in sperm count

It should be worn for between 12 and 16 hours a day for three to four weeks, they say, while it chills the testicles and collects temperature data over time.

This data could be used by doctors to find possible reasons for a man’s difficulty conceiving, and point to other suitable fertility treatments.

The CoolMen is designed to be worn discreetly under clothing and is made of lightweight, flexible materials to avoid injury, Cooltec says.

A normal sperm count is considered to be at least 20million sperm per millilitre of semen, while fewer than 15million would qualify a man for fertility treatment.

Research by the Reproductive Medicine Associates of New Jersey found in October that the number of men in the US and Spain with normal sperm counts is dropping.

Those who are unable to have children naturally or via IVF are overall 47 per cent more likely to develop the life-threatening condition, while men under 50 have three times the risk, a study found.

Undiagnosed prostate tumours may drive infertility, while low testosterone levels could lead to the development of both conditions, according to the researchers.

Early-onset prostate cancer affects around one in every 1,000 fathers under 50.

Around 35 per cent of men have poor fertility while two per cent are unable to father children.

The researchers, from Lund University, analysed all fathers and their first born children in Sweden between 1994 and 2014.

Information was taken from birth, cancer and assisted reproduction registers.

Fathers who underwent intracytoplasmic sperm injections (ICSI) were compared against those who became parents naturally or via IVF.

ICSI involves doctors injecting a single sperm into an egg. This is different to IVF, which mixes sperm with eggs and allows them to fertilise.

It generally costs up to £1,000, on top of IVF fees, and is recommended for men with very low sperm counts or who have previously struggled to have children.

Results suggest men who have ICSI are at a significantly higher risk of early-onset prostate cancer but not late.

IVF does not influence men’s risk of any type of the disease.

ICSI itself does not raise men’s likelihood of developing prostate cancer, however, infertile men may opt for the treatment in a last ditch attempt to become fathers.