Sex positions do NOT increase your chances of pregnancy, say experts

Sex positions with deep penetration do NOT increase your chances of conceiving, say experts as they separate eight other fertility tips into fact and fiction

Sex positions that penetrate the vagina deeper do not make it more likely that a woman will get pregnant, experts have said.

And lying on their back with their legs in the air also has no effect on their chances of conception, according to a group of gynaecologists.

They warn that a lot of tips on conceiving are spreading across social media without having any scientific proof, such as what to eat or what days to have sex. 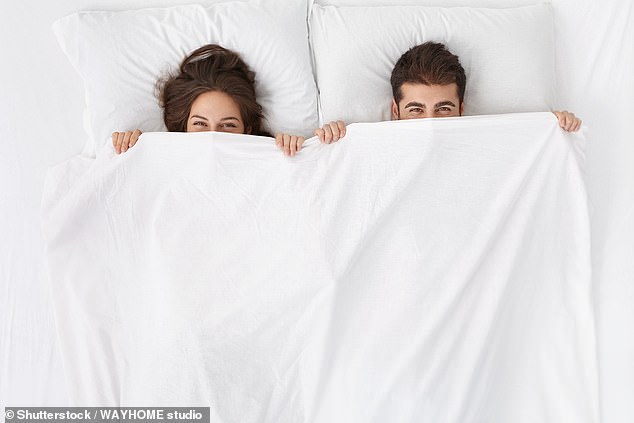 Sex positions that penetrate the vagina deeper do not increase your chances of getting pregnant, experts in Brazil have said after reviewing evidence

The Brazilian Federation of Gynecology and Obstetrics Associations Committee on Endocrine Gynecology led the report.

‘Positions adopted for intercourse’ was discussed in their paper, published in the journal Gynaecology and Obstetrics.

Lead author Dr Bruno Ramalho de Carvalho said: ‘The positions adopted for intercourse or how women remain after coitus have no association with improved chances of pregnancy.’

That goes against the popular view that ‘sex from behind’ or ‘missionary’ position is best to become pregnant.

These positions may be viewed as more successful because the semen is deposited closer to the cervix.

CAN YOU HAVE SEX IF YOU’RE GOING THROUGH IVF?

Dr Hana Visnova, a fertility specialist with the IVF Cube clinic, said one of the big ‘misconceptions’ among those undergoing IVF is that couples should abstain from sex.

She said: ‘Many doctors say couples should refrain, believing sexual activity might harm an embryo or the implantation.

‘But it’s my view this is entirely wrong. Yes, there may be some circumstances where women who are using their own eggs during IVF might be best to avoid sexual activity immediately after egg collection, as they may have some discomfort.

‘But sexual activity can not harm the embryo. There’s no scientific evidence at all that warrants a blanket ban on lovemaking during IVF treatment.

‘Providing you’re sensible, your embryo will not be harmed and sex will not adversely affect the chances of implantation being successful.’

Many IVF clinics recommend ‘pelvic rest’, that is no intercourse after an embryo transfer from 48 hours up to the entire two-week wait.

It is thought that the introduction of infection and uterine contractions caused by having an orgasm may have a negative impact.

A study of 390 women, published in the International Journal of Fertility and Sterility in 2009, found no statistically significant difference between those who had intercourse within 12 hours of IVF embryo transfer and those who did not.

But this has no bearing on the chance of fertilisation, according to the group of eight experts including Dr Cristina Laguna Benetti-Pinto from The University of Campinas and Dr Sebastião Freitas de Medeiros from the Federal University of Mato Grosso.

Dr de Carvalho said: ‘Although many women believe that remaining in a supine (laying face up) position for an interval period after intercourse facilitates sperm transport and prevents leakage of semen from the vagina, this belief has no scientific foundation.

‘There is no need for any postcoital routine.’

The woman reaching orgasm also has no bearing on the chances of pregnancy, Dr de Carvalho added.

He said: ‘There are many myths and misinterpretations of information regarding the optimization of the chances of natural procreation.’

And Dr de Carvalho, who works at the Bonvena, a reproductive health clinic in Brazil, said that even fertility experts are getting confused.

‘The easy access to information and to social networks today allows distorted concepts to spread with enormous rapidity,’ he added.

This, he warned, causes ‘a commotion of immeasurable impact, and even confusing health professionals’.

Another myth the gynaecologists debunked is the idea that a couple should only have sex every other day in order to make sure the sperm is at its optimum.

Again, Dr de Carvalho said this routine isn’t based on science, and there is a misperception that frequent ejaculation diminishes sperm count.

He said: ‘Interestingly, in men with oligozoospermia (low sperm count), sperm concentration and motility may be highest with daily ejaculation.’

Dr Hana Visnova, a fertility specialist at the IVF Cube clinic, Prague, Czech Republic, said: ‘Around one in seven couples in the UK have difficulty conceiving, which equates to around 3.5million people.

‘Fertility issues cause a great amount of stress and concern.

‘It’s vital couples wishing to have children are given the best possible advice, whether that’s on lifestyle changes to increase the chances of natural conception, or whether it’s guidance on the most effective methods of assisted reproduction.

‘But what we often see is conflicting advice for both couples trying to fall pregnant naturally and for those going through IVF.

‘Clarity is key – not the spread of disinformation through social media channels.’

WHAT OTHER TIPS ARE MYTHS?

Researchers at The Brazilian Federation of Gynecology and Obstetrics Associations Committee on Endocrine Gynecology looked into the following theories for boosting chances of pregnancy:

1. Women are more fertile as they get older – MYTH

Although a woman may feel healthy in her 40s, her fertility will not be in the same condition it was in her 30s, the Brazilian researchers said.

They said the evidence of age hampering fertility is not unanimous. But data shows that aged between 25 and 27 attempting to get pregnant across 12 cycles have a success rate of around 80 per cent.

In contrast, the figure is closer to the 50 per cent mark for those aged between 40 and 45.

2. Men are less fertile as they age – TRUE

The affect of a man’s age on reproduction is less clear, the researchers said – scientists are trying to get to the bottom of the topic.

However, the Brazilian team said there are ‘clear indications’ that older fathers have sperm of a lower quality. That’s on the back of two 2018 studies, one of which was led by the University of Campinas, published in Fertility and Sterility.

Studies have indicated men under the age of 25 are most fertile and, among these men, 95 per cent of their sperm has no DNA damage – a figure which falls to 80 per cent by the age of 35.

This was highlighted in a comprehensive review by the Center for Reproductive Medicine in Cleveland, Ohio, published in the journal Reproductive Biology and Endocrinology in 2015.

The authors said, although not impossible, chances of conception are very low outside the ‘fertility window’.

They said the best chance of pregnancy is six days before ovulation day, according to a 2002 study by National Institute of Environmental Health Sciences. Ovulation day falls two weeks before a bleed.

The team said having sex in the hope of getting pregnant even a day beyond that day is futile.

Lubricants may boost the bedroom antics – but they do nothing for the ability of sperm to swim, the researchers said.

‘Multiple lubricants have been shown in multiple studies to adversely affect sperm motility at a variety of concentrations,’ the authors said.

Sperm start to swim slower after 15 minutes of exposure to lubricants, a 1996 study by researchers at University of Texas Southwestern Medical Center at Dallas showed, the findings published in a now discontinued journal.

Bizarrely, mustard oil seems to work well as a lubricant, as when sperm is exposed to it, it stays hyperactive and it’s ability to swim isn’t reduced.

That’s according to a State University of New York Upstate Medical University study in 2014, published in Fertility and Stertility.

The Brazilian researchers added that findings such as these suggest that canola, baby or mustard oil should be the preferred choice of lube because they don’t appear to ‘significantly affect sperm motility’.

5. Sex closer to ovulation will conceive a boy – MYTH

A popular belief the Brazilian team often hear is that the gender of a baby is dependent on when it was made during the woman’s cycle.

But the Brazilian team argue that there is limited and controversial evidence to support this.

They said: ‘There is a small number of studies, most of them performed more than 15 years ago, in small groups of patients, and showing contradictory results.’

A woman may stock up on products deemed ‘fertility boosting’ for the best chance of conceiving.

But the Brazilian team said there isn’t enough evidence to support that diets – vegetarian, low-fat, or supported with herbal supplements, for example – will help.

Even among the most studied nutrients, vitamin D and folic acid, there isn’t enough robust science, the team said.

However, folic acid is important for the development of a healthy baby, and women who are trying to conceive should take it for that reason, the NHS say.

Male’s sperm can be damaged by obesity and poor lifestyle choices, mounting evidence is showing.

Consuming too much alcohol, caffeine, red meat and processed meat, sugar and total dairy products can slash the chances of pregnancy, the authors said, noting studies including one published in the Journal of Endocrinology by The University of Adelaide in 2017.

On the other hand, regular consumption of fish and seafood, poultry, cereals, vegetables and fruits, and low-fat dairy products can improve semen, shown in a group of studies.

Smoking is unhealthy in general, which could impact fertility, according to science.

In women, there is evidence that smoking decreases chances of pregnancy and increases miscarriage rates and an earlier onset of menopause.

For men, smoking could damage semen quality to DNA level, according to several studies including a 2018 study by the University of Hassan II Casablanca, published in Andrologia.