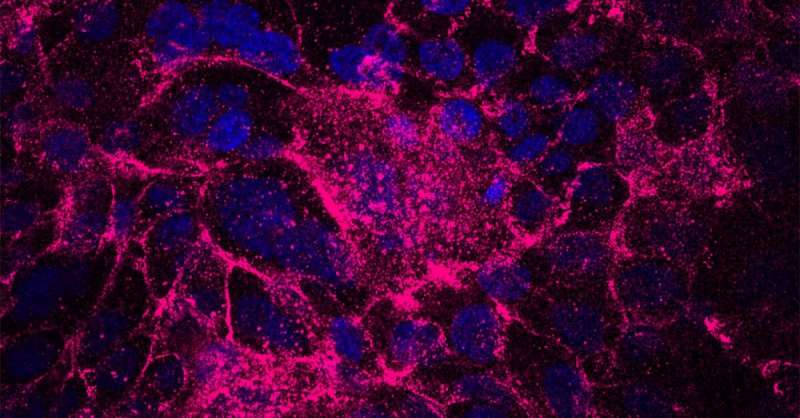 Researchers at University of California San Diego School of Medicine have discovered a molecular pathway critical to the initiation of pancreatic tumors. The mechanism could also contribute to the disease’s high resistance to chemotherapy and its propensity for metastasis.

The study, published on January 16, 2023, in Nature Cell Biology, found that pancreatic tumor-initiating cells must first overcome local “isolation stress” by creating their own tumor-promoting microenvironment, and then recruit surrounding cells into this network. By targeting this tumor-initiating pathway, new therapeutics could limit the progression, relapse and spread of pancreatic cancer.

Pancreatic cancer is one of the most lethal cancers, notoriously resistant to treatment. Almost all patients experience cancer recurrence or metastasis.

In the early stages of tumor formation, cancer cells (those with cancerous mutations, called oncogenes) experience a loss of adhesion to other cells and the extracellular matrix—the web of macromolecules that encase and support all cells. This isolation leads to a local lack of oxygen and nutrients. Most cells do not survive such isolation stress, but a certain group of cells can.

Tumor-initiating cells (TIC) play a major role in the formation, recurrence and metastatic spread of tumors. What sets them apart from other cancer cells is their resilience to these early substandard conditions. Like cacti in a desert, they can adapt to the harsh environment and set the scene for further tumor progression.

“Our goal was to understand what special properties these tumor-initiating cells have and whether we can control the growth and spread of cancer by disrupting them,” said senior study author David Cheresh, Ph.D., Distinguished Professor and vice chair of the Department of Pathology at UC San Diego School of Medicine and a member of the UC San Diego Moores Cancer Center.

To answer these questions, first author Chengsheng Wu, Ph.D., a postdoctoral fellow in Cheresh’s lab, subjected pancreatic cell lines to various forms of stress, including low oxygen and sugar levels. He then identified which cells could adapt to the harsh conditions and observed which genes and molecules were modified in these cells.

The stress-tolerant tumor-initiating cells showed reduced levels of a tumor-suppressive microRNA, miR-139-5p. This in turn led to the upregulation of lysophosphatidic acid receptor 4 (LPAR4), a G-protein-coupled receptor on the cell surface.

“LPAR4 is not normally found on happy cells, but it gets turned on in stressful environments to help the cells survive, which is particularly advantageous for tumor-initiating cells,” said Cheresh.

The researchers found that LPAR4 expression promoted the production of new extracellular matrix proteins, allowing the solitary cancer cells to start building their own tumor-supporting microenvironment.

The new extracellular matrix was particularly rich in fibronectin, a protein that binds to transmembrane receptors called integrins on surrounding cells. Once the integrins on these cells sensed the fibronectin, they began signaling the cells to express their own tumor-initiating genes. Eventually, these other cells were recruited into the fibronectin matrix laid by the tumor-initiating cells and a tumor started to form.

“Our findings establish a critical role for LPAR4 in pancreatic tumor initiation, and a likely role in other epithelial cancers, such as lung cancer,” said Cheresh. “It is central to tumor-initiating cells’ ability to overcome isolation stress and build their own niche in which tumors can form.”

But isolation stress is not the only way this signaling pathway can be triggered, the researchers said. Chemotherapy drugs are also designed to put cancer cells under stress. Indeed, Cheresh’s team found that treating cultured tumor cells and pancreatic tumors in mice with standard-of-care chemotherapeutics also led to the upregulation of LPAR4. The researchers said this might explain how such tumor cells could develop a stress tolerance and resistance to the drugs.

Further experiments also showed that using integrin antagonists to block cells’ ability to utilize the fibronectin matrix reversed the stress tolerance benefit of LPAR4 expression. Thus, the authors suggest targeting the LPAR4 pathway or disrupting the fibronectin/integrin interaction could be effective in preventing the growth, spread and drug resistance of pancreatic tumors.

“We can think of tumor-initiating cells as being in a transient state that can be induced by different stressors, so our clinical goal would be to prevent oncogenic cells from ever entering this state,” said Cheresh. “Now that we’ve identified the pathway, we can assess all the different ways we can intervene.”

The researchers suggested a new drug targeting this pathway could be used as a prophylactic in patients at high risk of developing the disease, or to prevent new tumors from forming in cancer cases with a high likelihood of metastasis.

“Treating cancer can feel a little like whack-a-mole,” said Cheresh, “but if we have two or three hammers and we know where the moles are going to pop up next, we can beat the game.”