There are three prefusion conformations for SARS-CoV-2 — two of which are shared with another coronavirus called SARS-CoV-1 S. However, the locked conformation is new, and there are limited data regarding its role in the virus’ life cycle. 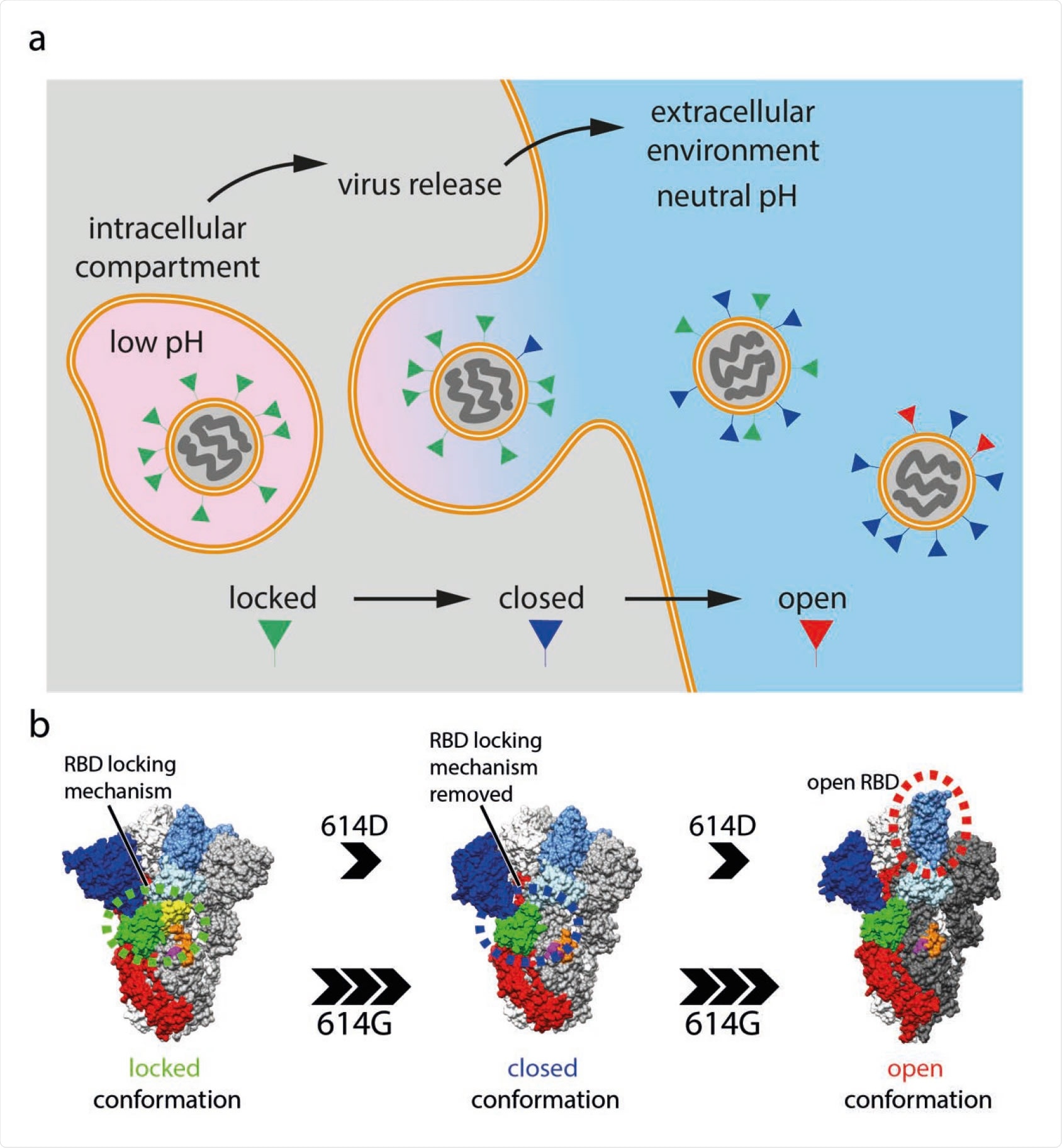 The research team created a SARS-CoV-2 S protein construct called S-R/x3 that uses a disulfide pair to stabilize the spike into the locked conformation. About 77% of S-R/x3 particles conformed to a locked state, while 23% remained in a closed state.

The locked conformation reconstruction helped the researchers find the receptor-binding domain (RBD) tightly clustered around a three-fold symmetry axis, linoleic acid bound in an RBD pocket, and residues 833-855 folded in a helix-loop-helix fusion peptide proximal region (FPPR) motif. In addition, a substantial disordered loop was discovered between residues 617 to 633.

These observations support previous research on locked conformation, which suggests the structure remains in a closed state because the folding of the FPPR motif prevents RBD from opening up.

Structural characteristics of a locked conformation with the D614G substitution

The team found that having the D614G substitution reduced the amount of locked conformation to approximately 20% of total particles. In contrast, over 80% of particles were in the closed conformation.

Similar to the S-R/x3 structure, there continued to be a presence of the three-fold axis, linoleic acid in the RBD, and the folded motif. However, the structure changes when observing domain D. The domain D showed a disordered loop structure between residues 617 to 641 that refolded into two small a-helices connected by a loop in the locked S-R/x3/D614G state.

Having the D614G mutation changed the structure of domain D in residues 617 to 641.

“Due to this structural perturbation, there are differences in the FPPR motif and in residues 316-325 which are located in the hinge region connecting domain C and D. In the 614D locked-1 structure, the long sidechains of R634 and Y636 interdigitate with the sidechains of F318 and Y837. In this interaction, R634 in domain D is sandwiched between F318 of the hinge region and Y837 of the FPPR motif, bridging these three structural features,” described the researchers.

They suggest the zip-locking interaction helps to sustain the loop structure observed in residues 617-641.

Another change with the inclusion of the D614 substitution is the absence of a salt bridge in the FPPR motif in the second locked conformation. Instead, the refolding into two small alpha-helices suggests a D614 mutation alters electrostatic interaction involving binding.

Moving from a locked to a closed state

Moving from the first locked state to the second locked state breaks linkages between residues in domain D and the FPPR motif. To move the locked state to a closed state would require further movement at the hinge region of the spike protein to allow the opening of the RBD.

Additionally, low pH levels maintain the RBD to a locked conformation. But when pH levels increase to 7.4, the metastability transitions it to a closed conformation. This opens the receptor-binding domain of the spike protein. Moving to a neutral pH also reverses the locked-2 conformation.

The researchers found removing an electrostatic interaction between D614 and R634 in the D614G spike protein destabilizes domain D, causing a locked-2 conformation. They speculate the different conformations in domain D are involved in regulating RBD opening and receptor binding.

Jocelyn Solis-Moreira graduated with a Bachelor's in Integrative Neuroscience, where she then pursued graduate research looking at the long-term effects of adolescent binge drinking on the brain's neurochemistry in adulthood.